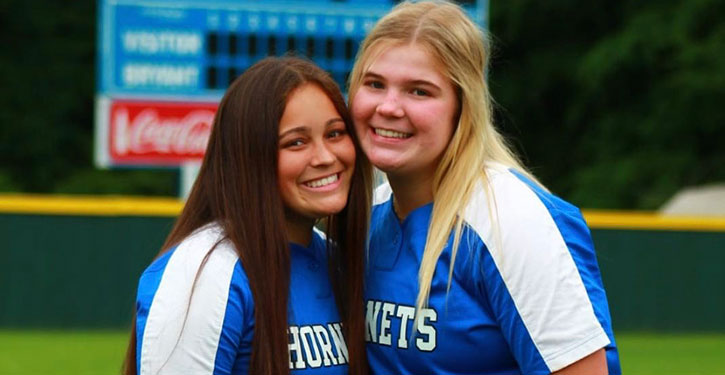 Alissa Suarez and Regan “Buddha” Dillon have been named all-State and all-conference for the Bryant Lady Hornets in 2021.

The awards were announced by Bryant head coach Lisa Dreher at a post-season banquet Wednesday night. The Lady Hornets’ letters were given out and four special awards were given. Mefford picked up the “Utility Player of the Year” award while Kalee Nichols received the “Built Tough” award. Emily Miller received the “Character” award while Herring picked up the “Extra Mile” honor.

“Alissa led us in most all hitting categories,” said Dreher. “She was very solid on defense with only three errors in 105 chances.

Suarez batted .520 and led the team with 53 hits. She had seven doubles, five triples and nine homers and a team-high 41 runs batted in. She scored 39 times.

“Alissa was a great leader on the team,” Dreher added. She became more vocal this year and always made sure the team was on the same page.”

In the State tournament, Suarez was 4 of 6 with a walk and played errorless defense.

“She was key defensively on one play in particular against Bentonville West, that took them out of the inning with runners on first and second,” recalled Dreher.

Dillon, the team’s catcher, batted .430 with 12 doubles, two triples and 10 homers. She led the team in doubles and homers. She drove in 40 and scored 32 times.

“Buddha finished the season very strong offensively,” said Dreher. “She hit a three-run home in the (State) quarterfinals that went about 270 feet.

“She’s been instrumental in knowing our opponents and coming up with strategies to beat them,” added the coach.

Mefford hit .413. She was one of two primary pitchers for the Lady Hornets, finishing with a 3.10 earned run average over 83 2/3 innings.

“Crissy played right field, first base and pitcher,” noted Dreher. “She played all three of these position at a high level. She was fifth in batting average and always seemed to come through with runners in scoring position.

“On the mound, she is known for her knee-buckling change up and may teams fear seeing her wam-up,” she added.

Gentry was the team’s third-leading hitter with a .429 average. She finished with 11 doubles, two triples and six homers, driving in 38 and scoring 38.

“Abby was very instrumental offensively,” Dreher commented. “She hit some of the hardest balls all season. She has very quick hands and teams struggle trying to pitch to a spot she can’t hit.”

Hoskins finished with a .419 average with eight doubles, a triple and three homers. She drove in 24 and scored 23 runs.

“Macy led us in BABIP (batting average on balls put in play) and walks (with 9),” noted Dreher. “At times, we struggled as a team with patience at the plate, but she had a good eye consistently. Defensively, she was a good leader in centerfield.”

Herring, who along with Suarez, started for the Lady Hornets since they were freshmen, batted .412 with seven doubles, five triples and two homers. She drove in 26 and scored 32 times.

“Bella can play infield or outfield,” Dreher said. “She played outfield all off season, but when I talked to her about playing infield for us this season, she dedicated herself to becoming our shortstop. She stayed after practice almost every day for more hitting or work on defense.”

The Lady Hornets finished 25-7 in 2021, 12-2 in the 6A-Central Conference, second to Cabot. At the State tournament, they reached the semifinals and lost to eventual champion Bentonville.