One would think that, if a basketball team converted 80 percent of its field goal attempts, it would be nearly impossible to beat. In fact, it would be difficult for the team’s opponent to even be close.

But there were the Bryant Junior Hornets, having hit 16 of their 20 field goal attempts, tied with the rival Benton Junior Panthers, 37-37, 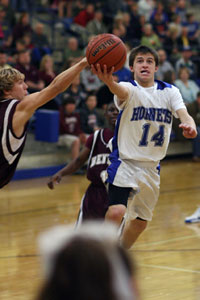 with :12.5 left in the final regular-season game for both teams on Monday, Feb. 9.

It was fitting in a way because it was the third meeting between the two and each had beaten the other once.

But how was Benton tied with the Hornets under those circumstances?

Credit the 3. Nine of the Panthers’ 13 made field goals in the game were 3-pointers, 27 of the 37 points. The last of those, a bomb by point guard Nathan Griffin had evened the contest with 1:20 to go. Bryant spread the floor and worked the clock down to :12.5 and head coach Steve Wilson took a timeout to set up what he hoped would be either a game-winning shot or overtime.

When play resumed, Bryant point guard Brantley Cozart got a step on Griffin just beyond the 3-point arc, drove into the lane, pulled up as the defense converged and knocked down a 10-foot jumper with :06 to play. Benton rushed the ball up the floor but Jordan Griffin’s long 3 was just short and the Hornets had a hard-earned 39-37 victory.[more]

“Benton played hard and I thought our kids played hard,” Wilson said afterward. “Brantley hit a big shot. And we had to shoot well because they made s 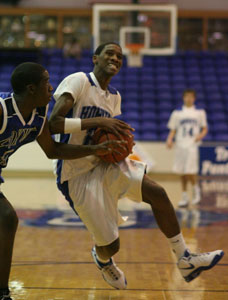 o many 3’s. I thought we could back off of them and they’d keep firing and start missing but they didn’t. The kids did what I asked them to do.”

The win improved the Hornets to 14-9 overall, 8-6 in the South Division of the Central Arkansas Junior High Conference, heading into the league’s post-season tournament which will bring the North and South Divisions together in Greenbrier starting Saturday, Feb. 14.

“We finished the second half of the conference season 6-1,” Wilson noted. “Of course, that one loss probably cost us a couple of seeds in the bracket. So we’ll have a tough row to hoe. But I’m proud of them. We’ve got a little momentum. Playing in this conference is so tough. Gosh, how many close games have we been in? The game we lost was a close one and we just barely beat Sheridan which is down in seventh or eighth place. Every game in this conference has been close. We’ve got one team in first and one in last and the rest of us are all bunched up in the middle.”

Benton and Bryant are among those in the bunch.

Neither of them could manage much breathing room in the game. The Panthers had an 8-5 lead in the first quarter after Nathan Griffin’s first trey which answered a basket by Bryant’s Derek Johnson. Cody McPherson banked in a jumper and, after a Benton turnover, Johnson got behind the press for a layup to put the Hornets up. A driving layup by Cozart made it 11-8 but Nate Smith’s 3 for Benton tied it at 11 going into the second quarter.

Triples by each Griffin produced a 17-15 lead for the Panthers midway through the second when Tyler Nelson got behind the press for a layup for Bryant to tie it. The game stayed 17-17 for three minutes before McPherson buried what proved to be Bryant’s lone 3 of the game. And when Cozart fed Jonathan Parks for a layup at the buzzer, Bryant led 22-17 at the half.

The third quarter, however, started with treys from Jordan Griffin (who finished with a game-high 15 points) and Jaret Stout put Benton back on top. Johnson and Parks answered for Bryant and the period eventually concluded with the two teams even at 27.

The Hornets appeared to make a crucial surge to start the final quarter. Logan Trudell hit two free throws, Cozart canned a running jumper in the lane and Parks made a steal and layup to construct a 33-27 advantage which was the largest of the game for either team.

But Benton battled back with a 10-4 run that was capped a pair of 3’s by Nathan Griffin, wrapped around a short jumper by Parks off a nice feed from L.J. McLaughlin, setting up the final series of events.

Parks, playing off the bench, led a balanced Bryant offense with 11 points. McPherson added 7, Cozart and Johnson 6. The Griffins accounted for most of Benton’s scoring with Nathan finishing with 12 to go with Jordan’s 15.