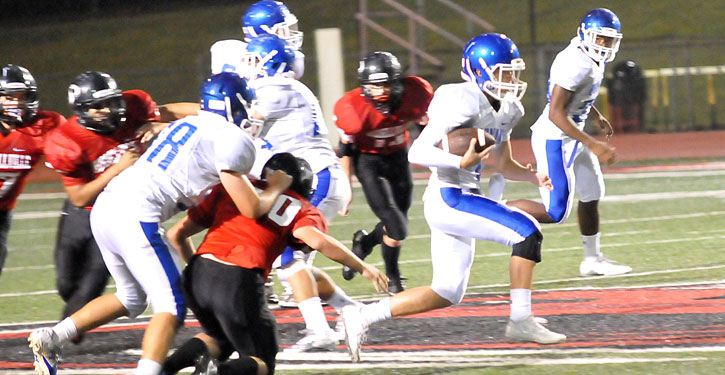 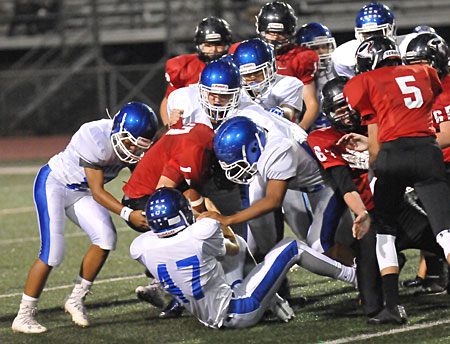 RUSSELLVILLE — The undefeated Bryant Hornets freshman team scored on four of its first five plays on offense and mixed in a scoop and score from the defense on the way to a 35-0 lead over the struggling Russellville Whirlwinds before their Central Arkansas Junior High Conference game was three minutes into the second quarter Thursday night.

Bryant coach Kenny Horn started filtering in reserves after that and the score held until halftime. The sportsmanship rule or mercy rule (running clock) was in effect to start the second half and everyone played for Bryant. The Whirlwinds, who remain winless on the season, scored on the last play of the game to make it 35-7 final. 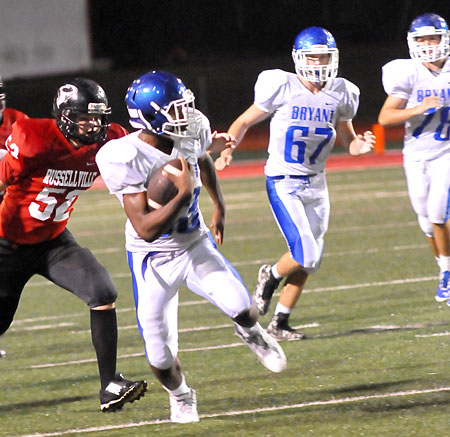 Now 6-0 in league play and 7-0 overall, the Hornets are set to travel to Cabot next Thursday for a sterner test against the Red Panthers of Cabot South.

Running back Ahmad Adams touched the ball twice against Russellville and scored both times. On the first play of the game, he galloped 46 yards for a TD. Later, he streaked 74 yards for a score giving him 120 yards on two rushes.

Quarterback Jake Meaders also ran the ball just twice but scored both times. His touchdowns went for 48 yards and 50 yards.

In a downpour early in the game, the Hornets failed to follow up Adams’ first TD with a successful conversion, leaving it 6-0. On Russellville’s first possession, a first-down run by quarterback T.J. Holt was stopped for no gain by linebacker Austin Bailey. On second down, the wet ball got away from Holt and pinballed off several players before Bryant’s Christian Cain scooped it up and ran it in from 24 yards out to make it 12-0, just 1:25 into the game. This time, Adams ran in the conversion and it was 14-0. 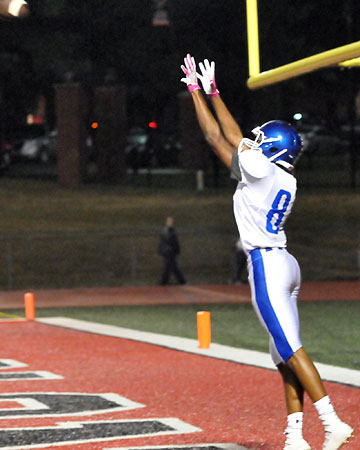 Catrell Wallace leaps to haul in a pass for a two-point conversion. (Photo by Kevin Nagle)

The Hornets nearly got the ball back again when the ball got loose on the return of the ensuing kickoff. The Whirlwinds’ Logan Goodman covered the ball after a mad scramble inside the 20.

Russellville went three-and-out. Bryant’s Tristan Sehika dropped running back Aaron Williams for a loss on a second-down sweep to highlight the possession.

Holt punted and the Hornets got the ball at the Whirlwinds’ 48 and, on the first play there, Meaders sprinted to the end zone.

A problem on the snap due to the wet conditions spoiled the extra point attempt and it was 20-0 with just over half the first quarter still to play.

A play into the ‘Winds’ next possession, Bryant’s William Boyd intercepted a pass and headed down the left sideline. He had one man to get past inside the 5 but the tackler slapped the ball out of his hands and Marquel Franklin recovered as the Whirlwinds avoided further damage for the time being. 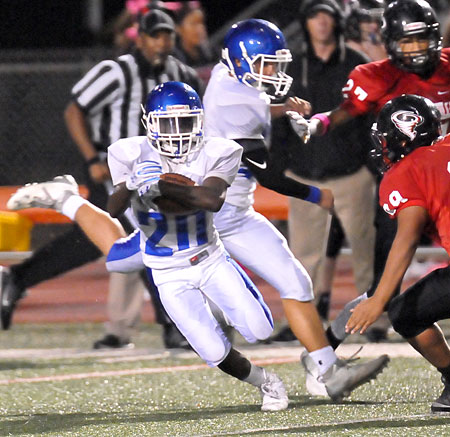 Trevon Herron (20) returns an interception right before the half. (Photo by Kevin Nagle)

Russellville managed its initial first down when Marquis Peter out-jumped Bryant corner Trevon Herron on a pass that was up for grabs. On the next play, Cody Blue made a stop for a loss and the Whirlwinds wound up punting from their own 18.

Bryant got the ball back at their own 45. Gavin Wells, on a fly sweep, picked up 5 to the 50. On the next snap — the first of the second quarter — Meaders sailed 50 yards for another score. His pass to Catrell Wallace on the two-point conversion made it 28-0. 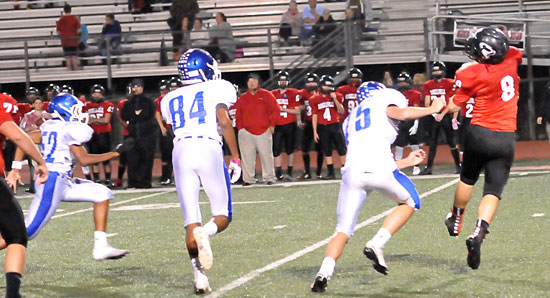 After eighth grade quarterback Brayden Whitworth completed a 22-yard pass to Peter, the Whirlwinds wound up having to punt from their own 44. Holt punted the Hornets back to the 26 where, on the first snap, Adams bolted through the defense for his 74-yard TD run.

This time Grayson Scoles added the extra point to make it 35-0 with 5:42 left in the first half. 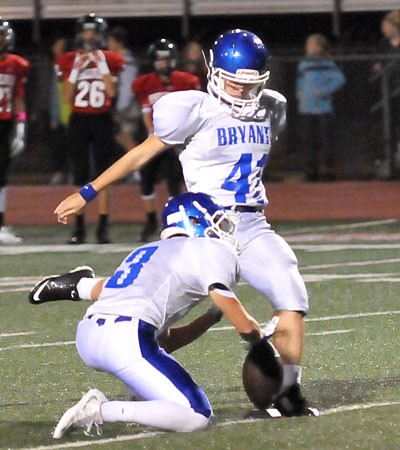 After trading punts, the Whirlwinds had the ball with time running out in the half. From their own 47, they tried to throw deep only to have Herron intercept at the Bryant 38. As the horn ending the half sounded, Herron laced his way through the Russellville players and into the end zone for an apparent touchdown. But a chop block along the way was cited negated wiping out the touchdown.

The Hornets’ offense in the second half was highlighted by a 23-yard run from Dalen McDonald to convert a third-and-18 from their own 17. Two more McDonald runs reached the 49 but a fumble on third-and-1 there ended the march.

The teams traded punts again but, on Bryant’s kick from Wells, it appeared that a pair of Whirlwind players touched the ball, making it live. Bryant pounced on it but the officials ruled that it hadn’t been touched and Russellville got one last chance to score after a timeout with 2:16 left.

Aided by a pass interference penalty, they got it done. Holt found Peter for a 36-yard touchdown pass with :37 left and counting. By the time, Connor Cooper added the extra point, time had drained away. 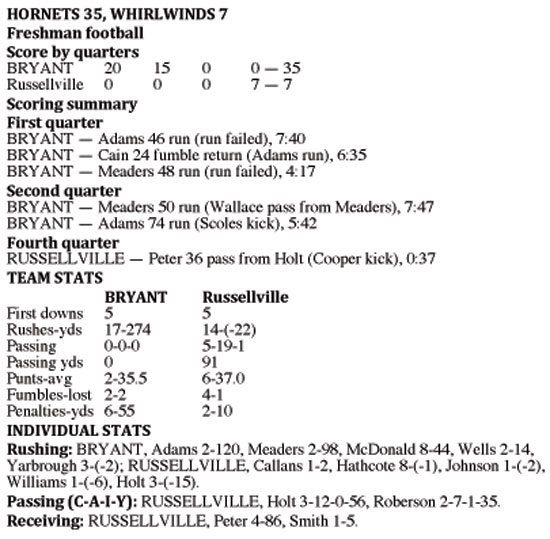