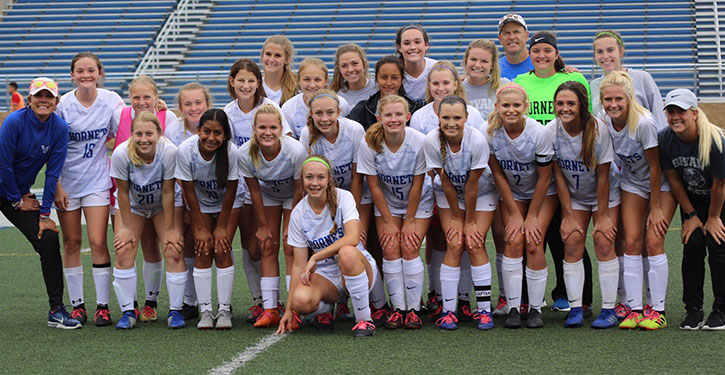 With a 2-0 win over 6A-West Conference champion Bentonville at Conway High School, the Lady Hornets not only return to the State title game, where they absorbed a 3-2 loss in overtime to Rogers a year ago, but they get another shot at the rival Conway Lady Wampus Cats, who handed them their only two losses of 2019 in 6A-Central Conference play.

Conway won the other semifinal on Saturday on their home field over Central 3 seed, Mount St. Mary Academy, 1-0.

The championship game will be played at the University of Arkansas in Fayetteville next weekend. Day and time will be announced on Monday.

On April 9, the Lady Hornets and Lady Cats played to a 1-1 tie with Conway winning in a shootout at Bryant. On May 3, Conway edged Bryant 3-2.

The Lady Hornets and Bentonville’s Lady Tigers played to a scoreless draw in the first half and through the first 15 minutes of the second half. That’s when Alyssa Fason’s goal broke the ice. Ashton Inman earned the assist.

“Ashton’s pass for the goal was an outside-of-the-foot ball that curved between two backs and Alyssa got on the end of it and had a great goal after a few touches,” said Lady Hornets’ second-year head coach Nicole Inman, who has led the team through their tremendous season despite fighting off the effects of a brain tumor and the resulting therapy.

With 12:20 left to play, Maddie Humbard made it 2-0, scoring off a feed from Lauren Heath.

“The girls came out ready and were determined to play well,” Coach Inman said. “Once we started to play, we were winning balls and looking to attack stronger.”

It was the Lady Hornets’ 13thshutout of the season as they improved to 15-2 overall.

“The defensive line was strong and communicated well,” Inman noted.

The back row was held down by Ashlyn Thompson, Rachel Studdard, Abbey Inman and Jillian Colclasure working with keeper Addison Funk, who had nine saves.

“And our attack was more together,” the coach mentioned. “We played most of the game in the middle or with us on the attack.”

Along with Ashton Inman, the midfield was patrolled by Melinda Hernandez and Mary Catherine (M.C.) Selig.
“Melinda had a great game and M.C. got the balls in the air,” Inman related.

Bentonville, which came into the game with a 20-3 record, finished with just three serious shots on goal.

At University of Arkansas, Fayetteville