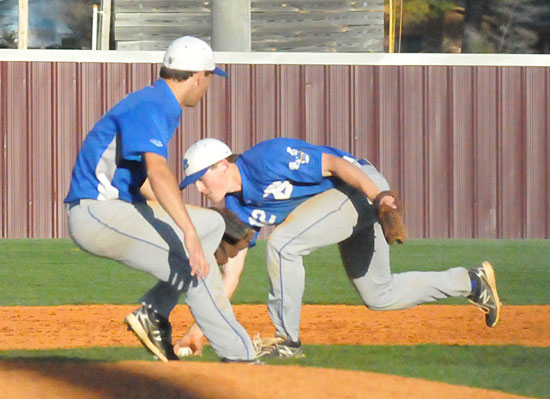 BENTON — Avenging their lone loss to an in-state team this season, the Bryant Hornets racked[more] up 10 hits including a home run by Tyler Green to back the pitching of senior ace Nate Rutherford on the way to a 6-1 victory over the Benton Panthers Friday night. 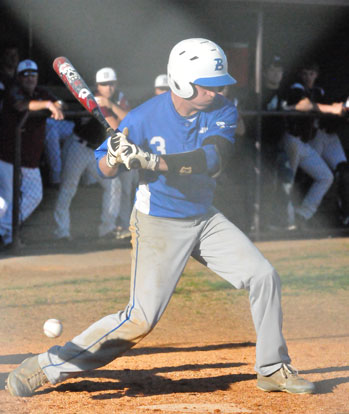 Rutherford needed just 59 pitches to make it through six innings. He and the Bryant defense didn’t allow a runner past first to that point. Benton broke up the shutout with a run on three of its six hits in the seventh.

With runners at second and third, the Hornets right-hander induced a comebacker to the mound to end the game.

And that was no small thing for the Hornets, who, admittedly, needed the win more than the Panthers. And the margin of victory mattered too.

Though Bryant and Benton are now tied for the South Conference lead with 7-1 marks, the Hornets have the tiebreaker since the Panthers had only defeated them, 1-0. And because the Hornets are actually competing for State Tournament seeding against the Class 7A teams in the West Conference, if they can win the South championship — certainly not automatic — they’ll get 10 points in the system that will determine the seeding (since Bryant doesn’t actually play in the West). In addition, a team’s point total includes margin of victory with a maximum of — you’ve got it — five runs.

The Hornets entered the week chasing Fayetteville and Bentonville in the ratings points standings.

“This is what I told our kids,” related Hornets coach Kirk Bock. “Benton’s going to win out. I think we’re the only ones that are going to beat them. If we just take care of our business and we beat Benton, then we’ll come in (to State) as a one seed. Obviously, we can’t stumble from here on out. In order for us to get one of the two byes out of the West, we have got to win this conference and we’re just one step closer right now.”

Rutherford once again dueled Panthers’ ace lefty Coulton Lee. In the previous meeting, Benton scratched out a run in the top of the first and that proved to be the only run scored. This time, Rutherford worked around his only walk of the game in the opening frame and the Hornets built a 2-0 lead by the time Lee came out of the game after four innings. In those four innings, the lefty needed 74 pitches. Rutherford only used 78 in the game. 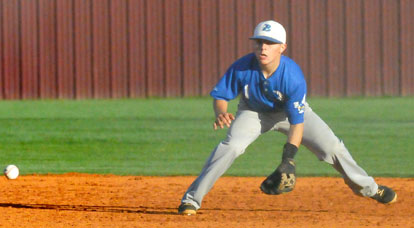 Bryant obviously was trying to make Lee work. Only once did the Hornets swing at the first pitch of an at-bat against him.

“That was our plan,” Bock said. “Last time we faced them, we swung at too many balls out of the zone. So we shrunk our zone down and it worked out pretty good. Our approach was totally different today.

“You know, Lee wasn’t as sharp today as he was the first time,” he acknowledged. “He’s got a sore back, I think. We just caught him on a bad day, which was fortunate for us because that’s a quality arm that’s going to play a lot of baseball.”

The Hornets improved to 19-5 overall this season. Three of their losses came in a season-opening tournament in Waxahatchie, Texas. Another came in a spring break event in Florida. Only one of the five losses is by more than one run, a 9-0 loss to Midlothian, Texas.

“I tell you, ever since we came back from Florida — when we went to Florida, we went to work and got better,” Bock noted. “When we weren’t playing, we were practicing and the kids have done a tremendous job up to right now. We’ve just got to keep it going. 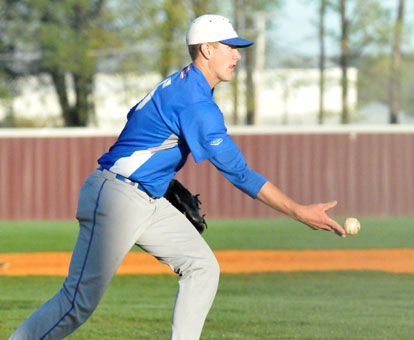 “We came up with some big hits,” he pointed out. “We scored a couple of runs (actually four) with two outs. That’s big.”

Bryant’s first run came in the second when they got one one, got him over and got him in. Daniel reached on an error when his grounder to Greyson Chilton at third took a late hop into the fielder’s chest. Daniel advanced to second on a passed ball then took third on Ty Harris’ sacrifice bunt. Thompson then executed the safety squeeze to get him home.

In the fourth, Daniel instigated another uprising with a solid single to left with one down. Harris drew a four-pitch walk then both moved up on a wild pitch. With two down, Warner fouled off a 2-2 pitch then found the hole on the left side for a clutch RBI single to make it 2-0.

Rutherford, meanwhile, had worked around a two-out single by Brinson Williams in the second and a lead-off hit by Blake Nations in the third. He worked a 1-2-3 fourth with Wilson chasing down a liner in left-center off the bat of Trey Bishop.

Carson Holloway relieved Lee in the fifth and, on his second delivery, Green unloaded with a drive over the wall in left. On the next pitch, Ezell pulled his second hit into left. With the hit-and-run on, Wilson lined a single to left to put runners at the corners.

After a visit to the mound by Benton head coach Mark Balisterri, Holloway got a strikeout, though Wilson stole second. Daniel followed with a sacrifice fly to right to make it 4-0.

Holloway walked Harris and Thompson but got out of the 33-pitch inning when Warner’s drive to left-center was tracked down by Benton’s Justin Vincent. 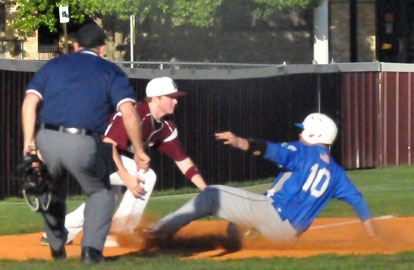 In the home fifth, Chilton bounced a single up the middle with one down but when Nations grounded to Thompson at second, he tagged Chilton and fired to first in time for an eye-popping doubleplay to end the frame.

Holloway retired the first two batters in the sixth but couldn’t get out of the inning. Back-to-back doubles by Ezell and Wilson made it 5-0 and Bishop was brought to the mound from first.

But he was greeted by Lessenberry’s RBI single. Daniel singled as well but Bishop got the final out with no further damage. He would work a 1-2-3 seventh.

In the meantime, Jack James opened the bottom of the sixth with a one-hopper through the box. The 6-3 Rutherford got a glove on it and it looked like James might beat out a scratch hit. But Ezell, who was headed up the middle to try to cut off the ball, changed directions, charging in to bare-hand the ball not 10 feet behind the mound and fire to first in time for a spectacular opening out.

Rutherford got Vincent to tap to first and Holloway to fly to Wilson in deep left to send it to the seventh.

“He did a tremendous job,” Bock said of his pitcher. “I think he was up in the zone a little bit there a few times but other than that, Nate’s Nate. He’s going to throw a lot of groundballs. He’s got a lot of life (on his pitches) and as long as we play good defense then Nate’s always going to do good.

“One of the best plays I think I’ve ever seen was the one Ezell made,” the coach asserted. “The doubleplay ball that Korey had — those were two fantastic plays.”

Rutherford retired the pinch-hitter Taylor Schmidt to open the bottom of the seventh but, after fouling off three two-strike pitches, Colby Johnson singled inside the line at third. Bishop popped out on a jam shot but then Williams laced his second hit of the game and Chilton added his, an RBI double down the left-field line.

That’s when Rutheford ended it by getting Nations to tap back to the mound.

The Hornets’ next game is on Thursday, April 18, at home against Pine Bluff. On the next day, they’ll take on Little Rock J.A. Fair at home.