Bryant hopes to avoid 2009 pitfall in Homecoming battle against Russellville 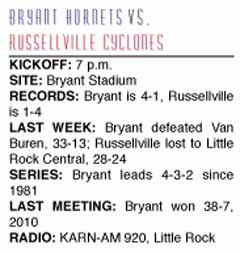 This scenario is all too familiar to Bryant head football coach Paul Calley.

In 2009, his Hornets were 5-0 through the first half of the season including a 52-20 romp at Van Buren to cap off the streak. They were favored to make it 6-0 as they came home to play the Russellville Cyclones.

This year, the Hornets are 4-1 after a 33-13 win at Van Buren coming into tonight’s Homecoming contest against the Cyclones who are 1-4 after two close conference losses to a pair of league contenders, Little Rock Central and North Little Rock.

“Dangerous, dangerous,” Calley said of[more] Russellville, recounting, “It was almost the same thing, déjà vu all over again. We went to Van Buren, we won, scored points, moved the ball but we didn’t do anything right. Then, the next week, Russellville came in here at 2-3 or 1-4 and beat us and we scored 3 points.”

“We’ve been reiterating that all week,” Calley asserted. “This is a tough ball game. Russellville’s gotten better. They’ve played everybody close. They need that one win to get them over the hump and I don’t want it to be us.”

Indeed, after the Cylcones got thumped by Morrilton 42-14 and Fayetteville 48-0 to start the season, head coach Jeff Holt and his staff made some changes and the team responded with a 37-30 win over Alma, then had North Little Rock down before being victimized by a comeback and losing 34-31. A similar situation unfolded against Central last week with the Tigers rallying for a 28-24 win.

“They’re a much better team than their record would indicate,” stated Bryant defensive coordinator Steve Griffith. “Offensively, they’re very solid. Coach Holt always does a good job mixing in formations and a variety of different schemes that he’s going to throw at you.”

Holt acknowledged his team’s improvement, saying, “We have played well the last three weeks but the last two we just haven’t been able to finish. Our kids are working to get better each week and I am proud of the effort they are giving.

“Bryant is a very well coached team and when you play against them you can always count on having to earn every inch because they don’t beat themselves,” he added. “They have a lot of speed and can put points on the board in a hurry. We will have to play extremely well.”

Calley said his team will need a better, more focused effort this week.

“We did just enough,” he said of the win over Van Buren. “We weren’t mentally into it. We weren’t focused. We played halfway hard but we made mistakes that are just inexcusable especially in week five of the season. It’s just unbelievable some of the things we did.”

One bright spot was the way the Bryant defense responded after the Pointers pulled within a touchdown in the second half. From that point on, Van Buren was unable to muster another first down.

“A light came on for us and we started executing,” Griffith said. “{Van Buren quarterback Jacob Eason) had gotten loose on the option once or twice. We had people assigned to the quarterback and we weren’t getting there.

“But we started getting there,” he continued. “They hit the screen a couple of times in the first half. In the second half, especially from the middle to late third quarter and on, we came up and did a much better job of playing the screen. Both the corners and the linebackers were doing a better job.

“It seemed like we played with a little more intensity,” Griffith commented. “Once (Van Buren) got the touchdown, it was like, ‘Oh, we better really play.’ Focus was not where it needed to be probably at the beginning of the ballgame, as a group. We had some individuals that I thought played very, very hard and made some improvement. We’ll have to have everybody with the lights on from the very beginning this week because Russellville’s a very good offensive football team.”

Specifically, Griffith said, “(Lane) Reves, the tight end, is a go-to guy. They’ll move him from tight end. They’ll put him in the slot, they’ll put him at wide receiver. They like to get the football to him.”

Reves has actually thrown a pass this season and he’s run the ball five times along with tying Frank Chiolino for the team lead in receptions with 23 for 300 yards and a pair of touchdowns.

“The quarterback (Mitch Mullen) does a really good job of getting the ball away on time,” Griffith noted. “He’s got a good, quick release. They do a great job of running the screens. He does a nice job of selling the pass then dumping down on the screens. And they’ve got a good solid running game. They put a variety of guys in there. (Kendall Bond) is probably their best running back. (Nick Hendrix) is a little smaller guy. He’s more of a scat back type.

“They’re going to present a big challenge,” the coach reiterated. “We’ll have to play well.”

Defensively, the Hornets are led by Jesse Johnson who has played at safety and linebacker this season. He’s been in on 37 tackles, as has safety Travis Royal who led the team in tackles last week against Van Buren. Defensive end Tim Kelly has drawn praise from his coaches along with tackles Michael Smith and Austin Dunnahoo. The combination of Parker Dunn and Jacob Powell seem to have solidified the line at defensive end. Newcomers Tyree Reese and Marshall Everett at linebacker each took a step forward last week as they get more comfortable with the defense. The Hornets have been solid in the secondary with Aaron Bell and Dillon Winfrey at the corners. Chris Stevens and Caleb Thomas have played well recently too.

Offensively, the Hornets have accumulated over 2,000 yards of offense. Junior quarterback Hayden Lessenberry has completed 98 of 135 pass for 1,307 yards and 13 touchdowns. Winfrey, Sawyer Nichols and Hayden Daniel have each more than 20 receptions.

But Calley indicated, the Hornets may have to use more of the I formation that served them so well over the last three seasons. Leading rusher Karon Dismuke may see time at fullback against Russellville.

Calley figures his offensive line of center Kordell Boykins, guards Cortez Williams and Blain Jackson and tackles Seth Alkire and Ian Shuttleworth will have their hands full with the Cyclones defense.

“We’re not going to be able to man protect as we have been,” the coach continued. “We haven’t been very good at man protection. We definitely can’t do it against this (style of defense). They’ll keep us guessing all night. We won’t be able to do a thing with them. So we’re going to have to do something a little bit different this week. It’s going to hard to run the ball against a seven-man box unless you’ve got seven in there to block them. That’s what we’ll have to do to run it.”

Oh, and one other thing, Calley emphasized, “We’ve just got to play harder.”