Bryant, North Little Rock meet again for all the marbles 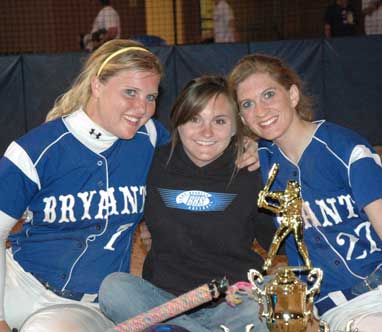 The Bryant Lady Hornets know they can beat the North Little Rock Lady Charging Wildcats but, like just about any coach you might encounter would say, it's tough to beat a good team three times in one season.

What that coach might not want to say is, it may be even tougher to beat a good team you haven't been able to defeat in two previous meetings.

That's part of the dynamic as the Lady Hornets and the Lady Wildcats, who finished 1-2, respectively, in the 7A-Central Conference, meet for the Class 7A State championship at Bogle Park on the University of Arkansas campus on Saturday, May 9, at noon.[more]

Despite trailing in both league meetings, the Lady Hornets defeated the Lady Cats, 7-3 in Bryant on March 31, and 6-4 at Burns Park in North Little Rock on April 23. You can review those two games on this site (in the Softball listings on the left of the page) if you like. The first game featured some stellar pitching by Bryant freshman Peyton Jenkins after some early difficulty with illegal pitches. She retired 10 in a row during one stretch. The Lady Hornets had to rally from a 3-0 deficit. Her two-run double was the big blow in Bryant's seven-run fifth.

North Little Rock was without standout pitcher Jessica Shelton in that game. Shelton has had some health issues to deal with this season after being named the State Tournament MVP during her team's 2008 run to the championship.

But she was available when the two teams met in North Little Rock. Bryant trailed 3-2 before freshman Jessie Taylor blasted a grand slam off Shelton to turn the game around.

Experience could be a factor in the contest too. As mentioned, the Lady Cats won the State Tournament last year. Most of their players were a part of that experience.

Bryant, on the other hand, has just three players that have experienced that pressure cooker in the State finals. Seniors Sarah Hart, Christen Kirchner and Paige Turpin were freshmen on the Lady Hornets team that made it to the finals in 2006, when Bryant lost to Fayetteville. How will the underclassmen including the five exceptional freshmen that start on this year's Lady Hornets' team respond to the big stage? That could be a big key in the outcome.

One thing's for certain, though: