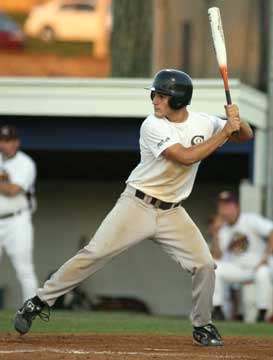 The Bryant Black Sox Senior American Legion team just needed something positive to happen Friday night when they took on the North Little Rock Colts. Just getting back on the field again was pretty good to begin with after the unfortunate events that ended their previous game at Lakeside.

And, behind the four-hit pitching of Trent Daniel and Tyler Sawyer, they notched a victory to boot, 6-2.

It was North Little Rock’s first game of the season after rainouts had dogged them. The Colts figure to be there in the end but five errors haunted them against the Sox.

“Not many games are that big in May, to where it’s almost a must win,” commented Sox manager Craig Harrison. “But this week, we really wanted to win tonight. I mean, really wanted to win tonight. We played a quality team. You could tell it’s early. They made a lot of mistakes and we capitalized on them and their two runs scored on mistakes we made.”

Seven of the eight runs scored between the two teams were unearned.[more]

As it turned out, Daniel fought through most of his four innings without perhaps his best pitch, a curveball, because of a cut on the index finger of his throwing hand. He allowed just two hits, walked a pair, hit a batter and struck out seven. 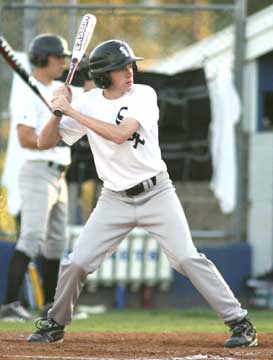 “I thought he battled his rear end off with not being able to throw the curve,” Harrison stated. “We said we were going to go fastball and change-up and just get all we can. I don’t think (the cut) will get any worse. It’s just going to have to callous up.

“He was throwing well then, in the fourth inning, they figured out we had two pitches,” he continued. “But I really thought he did a good job.”

Daniel had pitched around a lead-off single by Clark Sims on the first pitch of the game in the first then an infield hit off his glove in the second. After a 1-2-3 third, he opened the fourth by hitting Andrew Hohn. He retired the next two but then walked Cody Grace and Will Harris, both on 3-2 counts. It went to 3-2 on Jonathan Pounders before the Colts’ outfielder bounced one to the right side. But first baseman Brady Butler couldn’t smother the ball and it got past him into the outfield. With the runners going on the 3-2, two-out delivery, two of them scored.

That tied the game at that point. Sawyer relieved in the fifth and was sharp, allowing an infield hit in the sixth and a one-out single to center in the seventh. He used just 30 pitches to get through three innings.

And Sawyer picked up the win when the Sox snapped the tie in the bottom of the fifth then took advantage of four North Little Rock errors in the sixth to break the game open with three more.

Sawyer reached on an error to start the fifth. His bouncer to the right side was fielded by David Hohn but his throw to Harris, the pitcher covering the bag, was too far behind him. Harris reached back but couldn’t snare the throw. Sawyer wound up at second. Kaleb Jobe followed with a liner to center for a single, hit too hard for Sawyer to score. But when Butler hit a grounder to second for a force, Sawyer scored to put Bryant up 3-2. 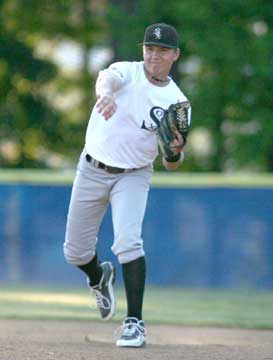 North Little Rock starter Kyle Thompson, who like Daniel (UAFS) pitched in college this spring (at Three Rivers Community College), eased through the first inning, working around an infield hit by Caleb Garrett. In the second, however, Butler doubled the right-center and, when Justin Blankenship got a sacrifice bunt down, a high throw from Thompson to first allowed him to reach.

Thompson fanned Brennan Bullock but then issued consecutive walks to Ben Wells and Austin Benning to force in a run.

Harris came on in relief and got out of the inning but only after Hunter Mayall drove in a second run with a sacrifice fly.

The right-hander worked around a single by Butler and a walk to Blankenship with two out in the third and gave up a walk to Mayall in the fourth with no damage resulting.

The sixth inning is no doubt one that the Colts would just as soon forget. B.J. Ellis, on an 0-2 pitch, was hit by a delivery from Harris. Moments later, David Hohn, who had moved to first from third, couldn’t squeeze Harris’ pick-off throw and Ellis moved to second. Benning got down a sacrifice bunt but Harris’ throw to first was off line. Ellis sprinted home to make it 4-2.

With three of the next four Bryant batters swinging from the left side, lefty Andrew Hohn came on to pitch. But Mayall greeted him to a single to left. With runners at the corners, Hohn fanned Garrett but on a pitch in the dirt. Though first base was occupied and Garrett was already out, Mayall broke from second and drew a throw from Cody Hill, the catcher. As soon as the throw went that way, Benning broke from third and scored as Mayall scampered by to first.

Mayall stole second but Hohn fanned Sawyer. Jobe followed with a slow roller toward third that David Hohn charged and fielded well. But his throw was late and off-target. Mayall scored as Jobe legged it to second, accounting for the final run of the game.

“At the plate, we battled a college pitcher,” Harrison noted. “The middle guy (Harris) did a good job but then we battled the tough lefty (Hohn) at the end. They’re a good team. They’ll be there at the end but this was a big win for us.”

The Sox are scheduled to return to action on Memorial Day at 6:30 p.m. at Cabot. They visit Searcy for a nine-inning game on Tuesday then host a doubleheader against Hot Springs Village on Wednesday before opening play in Zone 4 at Benton on Friday.

Bryant’s Long commits to OBU
May 22 in Bryant athletic history: 2001