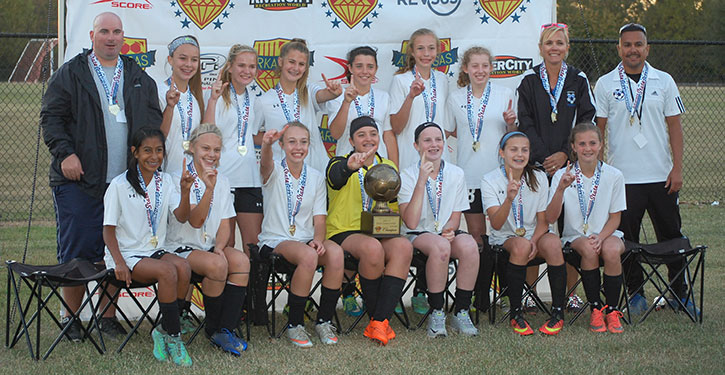 Bryant Soccer Club U15 girls team won the Arkansas State Soccer Championship for 2017 again this past season.  This is the highest level of competition in the State of Arkansas.

The team will be traveling to North Carolina next week to play in the Southern Regionals where they will play against the No. 1 teams from the South that are competing for a National Championship. Other states in attendance are Florida, Texas, South Carolina, North Carolina, Oklahoma, Louisiana, Mississippi, Alabama, Georgia and Tennessee.

The club is looking for items for the “goodie bags” that represent Arkansas, the players’ counties and cities. The bags will be passed out at the team hotel upon check in. There are 15 girls traveling with the Dolphins team.

“We want to represent our hometown with a strong showing against top talent,” said Mike Funk.

Also, at this tournament last year, the team performed well and beat the No. 1 team from South Carolina. In addition, the team won the “Fair Play” Sportsmanship Award for their age group.