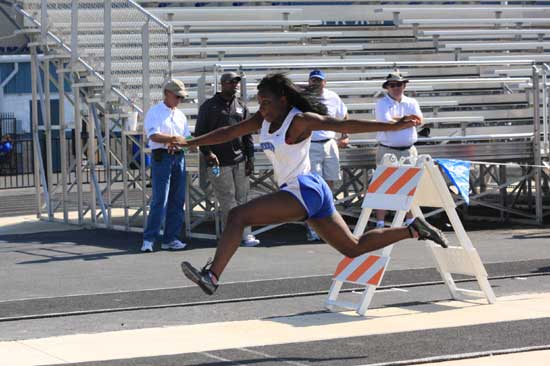 The Meet of Champs gathers all the top performers from every classification’s State meet for an overall competition.

The Bryant boys 400 meter relay team of Dillon Winfrey, Tanner Tolbert, Stephen Clark and Kris Brazzelle also earned a chance to compete at the Meet. Unfortunately, they were disqualified for running out of the exchange zone on their last exchange. The team was running among the leaders when they ran out of the third zone causing the disqualification. Bryant was the defending MOC champion in the event.

With winds up to 25 miles per hour buffeting the competitors, Royal jumped 36’11” on her second attempt to secure her Meet of Champs victory. Incredibly, that was a full 10 inches over the other competitors at that point.

“I didn’t jump that well at the state meet last week, so this is a big surprise,” Royal said. “On my winning jump, I actually thought I might have fouled but Coach (Danny) Westbrook said I was perfect on the board.”

“A lot of times in big competitions it comes down to whoever hits that one perfect jump,” Westbrook commented. “Alexis put a solid mark out there early in the competition and it held up for the win.

“This caps off a great track season for Alexis,” he added. “She has consistently been one of our lead scorers this year. She has worked hard and I'm really proud of her. Not many sophomores can call themselves Meet of Champs champion.

“A lot of credit for her success goes to our jump coaches Brad Stroud and Beth Solomon,” Westbrook noted. “The triple jump is a lot more technical than you would think. They have really worked hard on improving each separate phase of her jump and it really paid off today.”