The Bryant Hornets and head coach Kirk Bock pride themselves on what they call their “short[more] game.” And though they’re not talking about chip shots and putts, a few of their hits in Thursday’s game against the North Little Rock Charging Wildcats might’ve passed for them. 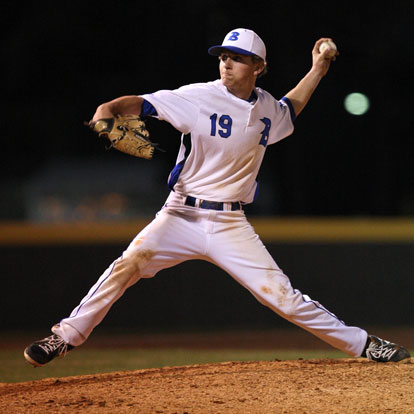 The Hornets scratched, clawed and hustled — including a delayed steal of home by senior Tyler Green — on the way to a 9-1 win over the Cats. Bryant took advantage of six walks and four errors with eight hits including three of them that didn’t get through the infield, and six stolen bases.

The season-high run total came in support of the pitching of Nate Rutherford and Jason Hastings with Hayden Daniel, back from a knee injury, closing out the victory with a 1-2-3 seventh. The trio scattered five hits with the lone run coming in the fifth inning after the Hornets had established a 6-0 lead.

“We put the ball in play,” noted Bock, whose team improved to 4-3 going into the 7A/6A-South Conference opener against the rival Benton Panthers at home on Tuesday, March 12. “One of the things that we can do this year that we hadn’t been able to do in the past is that we can run a little bit. Of course, those (infield hits) are cheap hits but we’ll take them. If we couldn’t run then we’d have been out.” 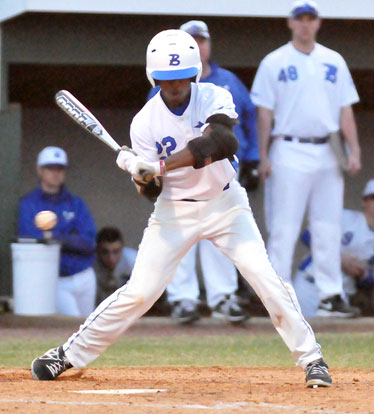 The teams came in ranked No. 2 and No. 3, respectively, in the Class 7A according to the Arkansas Democrat-Gazette. (The Hornets are ranked only behind the team they beat for the State championship last season, Rogers Heritage.)

“North Little Rock’s better than they showed tonight,” Bock mentioned. “If we play them at State, it’ll probably be a much different game. The thing about (North Little Rock coach Randy Sandefur, he’s going to have those guys ready to play. When it’s time to play, they play. He does a great job with them.”

The Hornets had runners on base in every inning. They took the lead in the bottom of the first when Hastings walked, stole second and, after Hayden Lessenberry walked, raced home on Wilson’s single up the middle.

Rutherford shut out the Wildcats in his four inning of work. He pitched around a one-out double by Preston Oberling in the first then worked out of a bases-loaded, two-out jam in the third. With one out, Dru Denny reached on an error. He appeared to have second stolen only to have the next batter, Evan Peters, called out for interfering with catcher Trey Breeding’s throw. 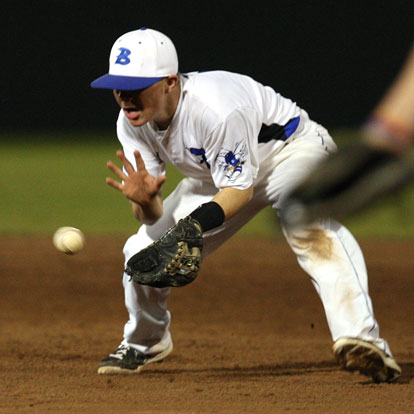 But Oberling walked to move him to second anyway. Alex Gosser followed with a cue shot to the left side that Ezell, the Hornets’ shortstop, ranged into the hole to knock down and prevent Denny from scoring.

Rutherford got clean-up hitter Chandler Thompson to bounce out to Korey Thompson at second to end the threat.

The big right-hander worked a 1-2-3 fourth, using only seven pitches, bringing his total of the night to 48.

North Little Rock starter Dylan Howell was helped out of a two-out jam in the second by Peters in center. Tyler Green had reached on an error and was headed to third on a lined shot up the middle by Ezell. But Peters charged and fired to third in time to nail the runner to end the inning.

The Cats’ right-hander pitched around a lead-off single by Hastings in the third. 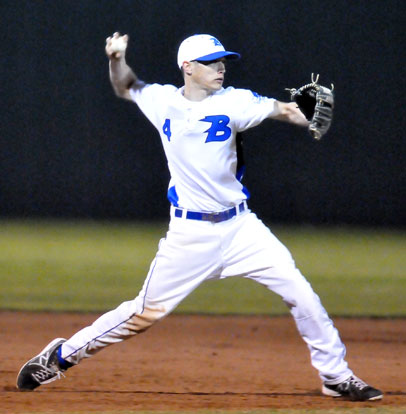 But, in the fourth, he hit Harrison Dale, who promptly stole second. When Daniel bounced to Oberling at short, Dale broke for third and the throw went there. But it was wild and Dale scored.

Daniel wound up at second and, after Breeding sacrificed him to third, Korey Thompson came through with a solid single to right to make it 3-0. Green lined a single to left resulting in a pitching change. Lefty Spencer Byrd fanned Ezell but Hastings hit a chopper that Byrd made a leap for only to have it tip off his glove. Oberling charged but his throw was not in time.

With the bags packed, Lessenberry worked a walk to force in a run then, with Wilson up, Green caught Byrd walking back to the mound after a pitch with his back turned and dashed homeward. On a bang-bang play, the ball rolled away from Gosser, the North Little Rock catcher and Bryant had a 5-0 advantage.

Hastings and Lessenberry moved up on the play and Wilson proceeded to walk. With Dale up, pinch-runner Connor Tatum scored on a wild pitch to complete the five-run uprising.

On the mound, Hastings was greeted by River Warnock’s base hit. An errant pickoff throw allowed the runner to race to third and, with one out, he scored the Wildcats’ lone run on a sacrifice fly by Peters. 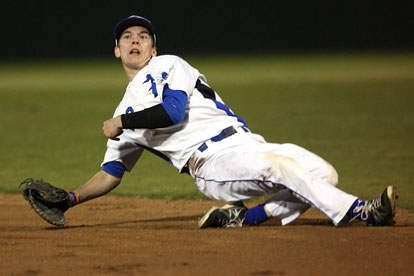 Oberling singled but Hastings picked him off to end the inning. Ty Harris, a defensive substitution that inning, made a nice relay from first to Ezell covering at second.

The Hornets’ short game produced again in the bottom of the fifth. Korey Thompson walked and swiped second and, with one out, Ezell hit a tapper on the infield that Byrd bounced off the mound to field.

Ezell beat his throw to first and the Hornets had runners at the corners for Hastings.
Ezell, however, was picked off first. Scrambling, he stayed in the rundown long enough for Thompson to make a break for home. The throw from second to the plate was wild and not only was Thompson safe but Ezell scrambled all the way to third.

Hastings drove him home with another roller up the third-base side that Byrd couldn’t get to and throw to first in time.

Lessenberry followed with a grounder to Zach Rathbun at third. But when his throw to first sailed, courtesy runner Austin Caldwell sprinted all the way home as Lessenberry rolled into second, making it 9-1.

Hastings surrendered a scratch single to Gosser in the top of the sixth that Harris nearly turned into a spectacular out. After a diving stab, however, his throw to Hastings covering the bag was too late. But the Bryant lefty retired the next three to finish his moundwork.

Daniel breezed through the top of the seventh to finish it out.

“Neither one of them had their best stuff tonight but they were able to win,” he added. “And that’s a mark of a good pitcher. If they keep doing that, just competing, they’re going to be okay.

“Hayden did a great job,” the coach continued. “He came in and pounded the dad-gum zone and that’s what we need right there.”