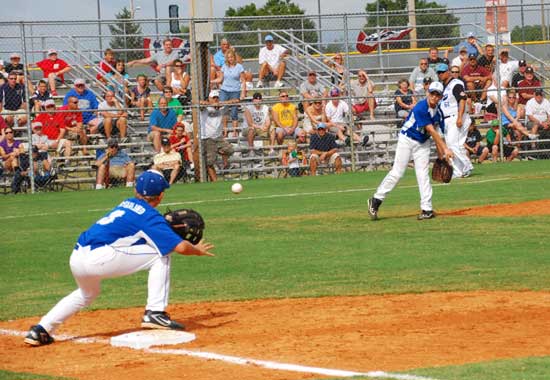 WINCHESTER, Va. — The Bryant 10-year old All-Stars made history in their first game of the 2011 Cal Ripken World Series on[more] Saturday, Aug. 13. Unfortunately, they were on the losing end of the longest game in the history of the Cal Ripken 10-year-old World Series as they suffered a 5-1 loss in 10 innings to Hickory, Md. 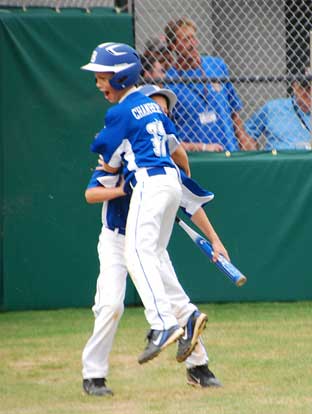 Grant was the starting pitcher and allowed a leadoff single to begin the game but then fielded a comebacker to the mound and got a force at second for the first out. Hickory’s three-hole batter then doubled to right over Bariola’s head to put runner on second and third. Grant then snagged a liner back up the middle and fired to third to catch the runner off the bag for an inning-double play.

In Bryant’s first at-bat, Catton led off with a walk and then Lessenberry struck out. Catton moved to second on a wild pitch and then to third on Chambers’ grounder to shortstop but was left stranded when Grant grounded out to third.

In the top of the second, Grant got the first batter on a grounder to Greiner at second but then issued a walk on a 3-2 pitch. He then battled back from a 3-0 count to record his first strikeout and ended the inning with a grounder back to the mound.

Bryant again put their first batter on when Dupree walked, but then went quietly as McFarland struck out, Bariola hit into a fielder’s choice and Mullings grounded out to second.

Hickory broke through with a run in the top of the third. After Grant recorded his second strikeout, he walked the leadoff batter. The next batter hit a high-chopper back to the mound and Grant’s only play was at first as the runner on first moved to second. The three-hole hitter for Hickory came through again as he rifled the first pitch he saw back up the middle to the left of second base. Chambers dove for the liner but missed and the ball went all the way to the fence for a double and Hickory led 1-0. Grant then got a grounder to short to end the frame.

After Greiner grounded out to second to start the third, Catton got Bryant’s first hit when he led off the third and grounded a ball up the middle that just got under the shortstop’s glove and into center. Lessenberry then grounded back to the mound, forcing Catton at second and then Chambers ended the inning with a grounder to second that forced Lessenberry. 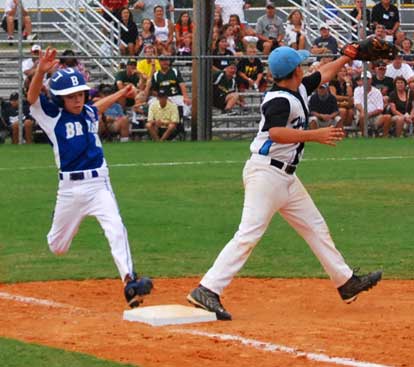 In the top of the fifth, Grant walked the first batter. Hickory’s nine-hole batter dropped down a sac bunt toward third and beat it out for a hit but Dupree fired to Chambers at second who tagged the lead runner who had rounded second base too far. A liner to McFarland at first and a swinging strikeout ended the inning.

Bariola opened the bottom of the fifth for Bryant by striking out. Mullings flied out to left for the second out. Shepard hit for Greiner and walked on a full-count pitch but Catton struck out to end the inning.

In the top of the sixth, Hickory’s first batter flied to Catton in center but the following batter lined a double down the right field line and went to third when Bariola’s throw to third was wide of the bag. The next batter lifted a fly to Bariola in right for the second out and the runner on third broke for the plate as Bariola’s throw came home. However, he stumbled and attempted to retreat to third but was tagged out in a rundown at the plate that went from Lessenberry to Dupree to Grant.

Down to their last at-bat, Bryant rallied to tie the game. Lessenberry led off with a hard liner but it was right at the shortstop for the first out. Chambers stepped in next and launched a long fly to center where Hickory’s center fielder retreated and stumbled as the ball arrived. The ball hit the pocket of his glove as he was falling and it first appeared that he had made an outstanding catch but the second base umpire hustled out to center and ruled that the ball had hit the ground when he fell. 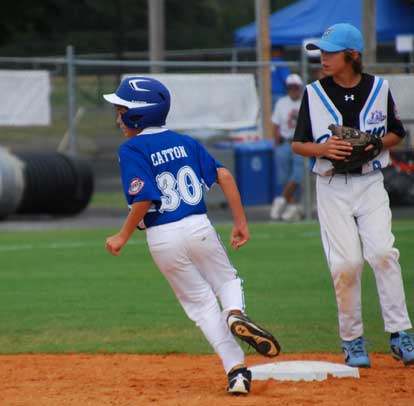 With Chambers on second with a double, Grant stepped in the box. A wild pitch moved Chambers to third. Grant then bounced back to the mound where the pitcher glanced at Chambers and then threw to first. But his look to third was not long enough to freeze Chambers who raced home and slid headfirst, with his hand reaching between the catcher’s legs and slapping the plate just before the return throw from Hickory’s first baseman. Dupree then struck out to send the game to extra innings with the score tied 1-1.

With both pitchers having thrown the maximum of six innings in a game, Chambers took over on the mound for Bryant in the top of the seventh and retired three straight batters on a fly to center, a grounder to second and a grounder to Grant who had taken over at shortstop. In Bryant’s half of the inning, McFarland struck out and Bariola grounded to short. Mullings drew a two-out walk but then Greiner, who had re-entered after Shepard hit for him, grounded to first to end the inning.

In the top of the eighth, Chambers set Hickory down in order by recording two strikeouts with a pop to shortstop sandwiched between them. Bryant had a golden opportunity to win the game. Catton led off the inning and was hit by a pitch. Lessenberry’s sac bunt moved him to second but then both Chamber and Grant were called out on strikes on pitches that appeared to be well off the plate. So the game moved to the ninth inning still tied.

Hickory’s three-hole hitter led off the ninth with a walk but was erased when their cleanup batter grounded back to Chambers and Bryant turned a 1-6-3 double play. A liner to Dupree at third ended the inning. In the bottom of the frame, Bryant went 1-2-3 with Dupree and McFarland striking out and Bariola grounding out to the shortstop. 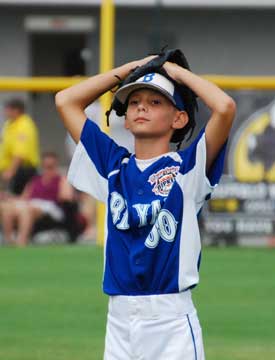 The game moved to the 10th inning but the scoreboard could not show it as it only had room for one digit under the “innings” column. Hickory’s first batter jumped on the first pitch for a single to center but the next batter forced him out at second with a grounder to Dupree at third. Chambers then walked the last two batters in the Hickory lineup to load the bases. Dupree snagged a liner at third for the second out and Bryant was one out away from getting out of a big jam. However, a wild pitch brought in the runner from third to break the tie and moved the other runners up a base. Then, on a full-count pitch, the Hickory batter grounded hard to third where the ball went off Dupree’s chest. His throw to first was high for an error and another run came in to score. With runners on second and third, Hickory’s three-hole hitter collected his third hit of the game, a single down the left field line that got by Mullings and went all the way to the fence. When the play was over, two more runs had scored and Hickory had a runner on third. McEntire came into the game in relief of Chambers and after a couple of quick strikes got a popup to McFarland to end the inning but Hickory led 5-1.

In its final at-bat, Bryant put a runner on but failed to score. Mullings led off and grounded back to the mound. Jackson hit for Greiner and reached first when he was grazed by a pitch. Catton’s grounder to second forced Jackson at second for the second out before Lessenberry grounded out to first to end the game.

At the conclusion of each World Series game, a player of the game is selected for each team. Grant received the honor for Bryant with his six-innings of one-run pitching while striking out four.

Next up for the All-Stars is their second pool play game on Sunday, Aug. 14, against the host team, Winchester, Va. Game time is 4:30 Central time. 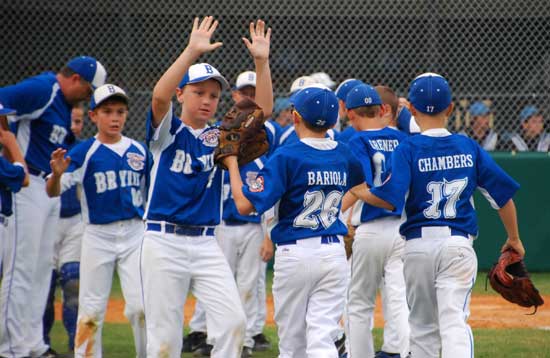 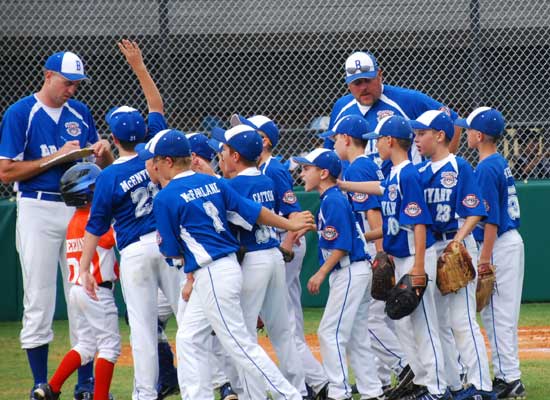