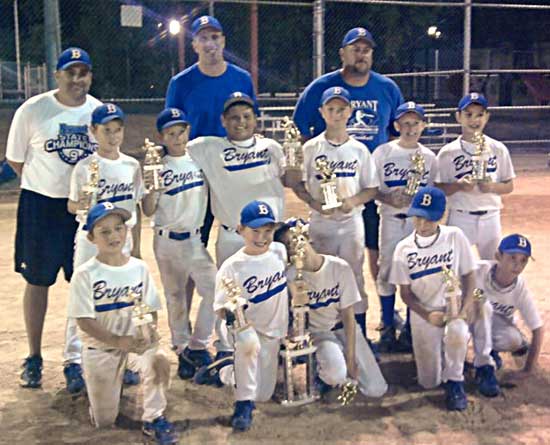 SHERWOOD — A team of youngsters from Bryant won the 10-and-Under, 2010 Fall State USSSA baseball tournament played in Sylvan Hills on Sept. 18 and 19.

In pool play on Saturday, the squad rallied from a 3-0 deficit to beat the Central Arkansas Stallions 5-4, but then dropped their second game when uncharacteristically sloppy defense led to a 12-5 loss to the Conway Cats.

Entering Sunday’s bracket play as the No. 6 seed in the eight-team tournament, Bryant beat the Arkansas Cobras 10-1. They jumped out quickly in the first with five runs, with RBIs on a single by Chambers and ground outs by McEntire and James.

The lead swelled to 7-0 when they plated two more in the second as Grant singled in Catton and later scored. Greiner, Mullings and Lessenberry each scored in the third to make it 10-0.

McEntire and Greiner combined to hold the Cobras to just two hits while striking out three batters and Catton made a sparkling defensive play at second base when he dove and snagged a liner over his head.

The semi-final game was a rematch against the Conway Cats. Determined to atone for the sloppy game of the previous day, Bryant jumped out to a quick 1-0 lead. Catton led off the game by reaching base when the first baseman dropped a throw, Grant moved him to second with a sac bunt and he scored on a wild pitch.

After Conway tied the game 1-1, Bryant took a 3-1 lead in the top of the second. Greiner walked and Lessenberry was hit by a pitch and both eventually scored on wild pitches. The lead increased to 4-1 when James singled and later scored in the fourth inning.

In the top of the fifth, Bryant put the game out of reach when they batted 11 men and scored six runs to make it 10-1. Included in the rally were RBI singles by Chambers, McEntire, James and Lessenberry.

Grant and Chambers shared the pitching duties, with Grant allowing two hits and one walk in the first three innings before Chambers came in to retire the final six batters.

In the championship game against the Arkansas Mudcats, Bryant started quickly once again by pushing five runs across the plate. The Mudcats’ starting pitcher struggled with his control and walked the four of the first five hitters and allowed a two-run single to Dupree.

After striking out two in the first, starting pitcher McEntire struggled through the second inning and the Mudcats cut the lead to 5-2 by drawing three walks and getting a single on a fly to left field.

Chambers took over on the hill in the third and allowed a long one-out triple in the gap to the Mudcats cleanup hitter. Following a strikeout, the Mudcats appeared to have scored the runner from third when the batter lined a single over Dupree at first, but Nguyen scooped up the shot and fired back to Dupree on the bag at first for a close call that went Bryant’s way to end the inning.

In the bottom of the third, Bryant upped the lead to 6-2 when McEntire doubled over the left fielder’s head with one out and scored on a wild pitch.

The lead increased to 8-2 in the fourth. Mullings led off with a single, stole second and was bunted to third by Day. With two outs, Catton’s grounder went through the legs of the Mudcats’ second baseman, allowing Mullings to score and then Catton scored when Grant lined a double over the left fielder’s head.

Chambers retired the side 1-2-3 in both the fourth and fifth to hold the Mudcats at bay.

In the bottom of the fifth, McEntire singled, took second on a wild pitch and then third on a throwing error by the pitcher. James singled him home and then Greiner was hit by a pitch. Following an intentional walk to Mullings to load the bases, Day walked to bring in James and give Bryant a 10-2 run-rule win.