Bryant vs. Benton: Coming together to do battle 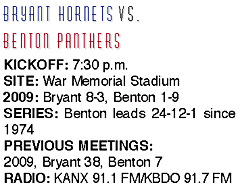 It’s somehow appropriate that the one thing that brings together so many in Bryant and Benton — 26,000 strong last year — winds up with all the Bryant folks on one side and all the Benton folks on the other as the football teams do battle in between.

Of course, much of the “coming together” part is in preparation, for planning all the different aspects of what has become an event that almost overshadows the actual football game.

It has, in fact, become so much more than the game. It is a celebration of the two towns, individually and collectively. But also, since it has been moved to the beginning of the season, it has developed into an actual celebration — a big party — to mark the start of football season.

Those that have followed the rivalry over the years know the story. For the first 25 years, it was almost all Benton. Bryant managed an upset in 1978 then won twice more with unusually good teams in 1984 and 1985.

Benton had the numbers, the power and the tradition.

Note that the Panthers wielded their power with the ground game, most notably in Dwight Fite’s wishbone offense.

In the last half of the 1990’s, Bryant began to grow — and not just a little bit. It happened fast, and not just the city itself but the school district, fueled to a great extent at first by the troubles in the Little Rock School District and the courts, then eventually by the quality of the education and life, in general.

The games got more competitive until, in 1998, a brash, young coach — an alum who had quarterbacked those ‘84 and ’85 Bryant teams — joined a core group of solid assistant coaches already in place for the most part. First thing, Daryl Patton changed the offensive approach, deploying his team in something called the spread, a high-octane, wide-open pass-oriented offense that was becoming the rage among college and high school coaches. Though the first year was another losing campaign, word began to spread about how much fun it was to watch and more folks starting coming out to the games.

Then, in 1999, there came the proverbial perfect storm. An extremely talented group of players came of age, a group as sure of themselves somehow as their head coach. It was incredible really that, after 13 years without a winning season, the Hornets not only had a winning season they went undefeated and added the first playoff victory in the history of the program.

You see, the spread offense is a great way for a team that is over-matched physically to compensate. It’s a finesse game that, in the hands, arms, legs and feet of the right players, can be as devastating as it is thrilling.

And that’s how the Hornets turned the tide. While Bryant did have more players to choose from than had been available before, it still wasn’t getting the type of athletes they had to face. They just had the right guys to run that offense.

The Hornets haven’t had a losing season since including a seamless transition from Patton to his friend and assistant Paul Calley.

(It must be noted, too, that the often over-looked facet of Bryant’s evolution came on defense under the guidance of Steve Griffith. After all, defense wins championships, as they say, and that has been proven true in no small way at Bryant. And it has come rarely by brawn, mostly by guile.)

In Benton, meanwhile, things began to turn the other way. And it was as much because the fans of the day were growing impatient with the grind it out style that had made the Panthers so successful over the years. That wide-open offense sure was appealing. It was exciting. Folks were saying, ‘Why can’t we do that?’

So, Fite retired and a sort of transition began. It was hit-and-miss for a while and, at one point, disillusionment seemed to set in among the fans and players. The success wasn’t as dramatic as they’d hoped for. Bryant was still growing and succeeding. And, stunningly, the Hornets were defeating the beloved Panthers almost every year.

The worm had turned.

Now, much of the success the Panthers did enjoy in the first half of the 2000’s came while another brash, young coach named Scott Neathery was offensive coordinator. Before joining the staff of head coach Marcus Jones at Benton, Neathery had succeeded Patton as the head coach of the Bryant freshman team where he continued to employ the spread that Patton had installed there. He led the team to a 26-13-1 record in four years.

Neathery eventually left Benton to become head coach at Sheridan where a scary bout with Leukemia kept him from ever getting anything established. He retired from coaching for a year or two and emerged as the athletic director back at Benton.

Now, he’s Benton’s new head coach and, it figures, he’ll be installing his version of the spread — a “take what the defense gives you” approach — to help compensate against those bigger, faster, stronger foes. And, though there may not be a bunch of wins this season, it will probably be an exciting brand of football to watch.

Panther fans, no doubt, hope the results will be similar to those that Patton helped bring to Bryant.

And back in Bryant, the Hornets are now an established power. There’s a winning tradition at Bryant. In fact, the Hornets have won eight games or more in seven of the last 10 seasons including four in a row. And they’ve been dominating the series with Benton in much the way the Panthers did for the first 25 years of the rivalry.

The Hornets, with 35 seniors this year, are again the prohibitive favorite.

And they no longer need the spread. Though they still use it some — after all, there are a few now, they’re still not fielding a team full of football specimens — but they have become more of a power team on offense. Certainly, they were the last two years as running back Chris Rycraw re-wrote the program’s record book for rushing.

It’s funny how it works out. While there are a few teams that have continued to thrive in the spread (Pulaski Academy, Shiloh Christian, etc.), most often when a football program gets established, the value of the running game increases. It has something to do with consistency and balance and keeping your defense a little fresher.

Just look at the perennial powerhouses in the 7A-West who have dominated the State finals almost the entire decade. Fewer and fewer of them are using the spread in the classic run-and-gun of the past. (Even Patton, when he led Fayetteville to its first State title, went to a more balanced attack — and it proved to be a difference maker against a great Bryant team in the playoffs on the way to that championship.)

So, in a way, Bryant has become the old Benton as Benton hopes to become the new Bryant.