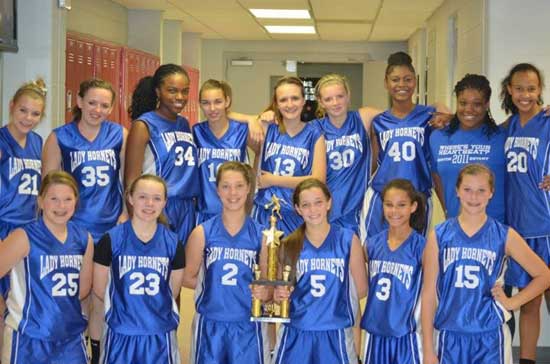 LITTLE ROCK — The Bryant White Lady Hornets eighth grade team of Bryant Middle School shot 52[more] percent from the field and rolled to a 38-27 win over the Anthony School Lady Panthers to capture the Panther Pride Classic championship at the expense of the hosts.

“We have been rally working on our shooting,” stated Lady Hornets coach DeAnna Ward. “We also had 29 team rebounds. My post players stepped up and hit the boards hard.”

Lara White led the team with 12 points, hitting 6 of 7 shots from the field, to go with four boards and two steals. Skylar Davis added 8 points and a team-high six steals to go with a pair of rebounds. Shayla McKissock had 6 points, a steal and two caroms while Faith Brown scored 6 with four rebounds and a pair of thefts.

Carolyn Reeves pitched in with 4 points, two rebounds and a steal with Julianna Ward added 2 points and a steal.

Ward led the work on the backboards with seven. Adding to that was Sharayah Wallace had three rebounds. AnnMarie Keith and Alyssa Linam grabbed two caroms apiece.

Now 2-1 on the season, the Lady Hornets visit Benton tonight.