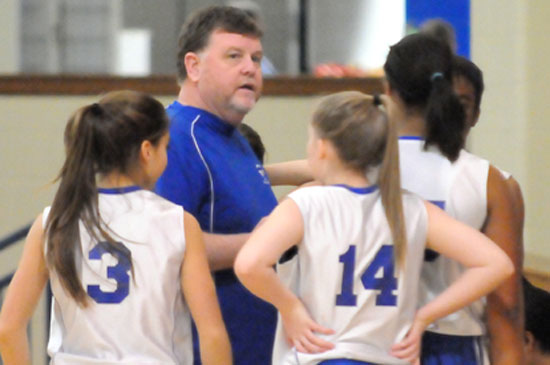 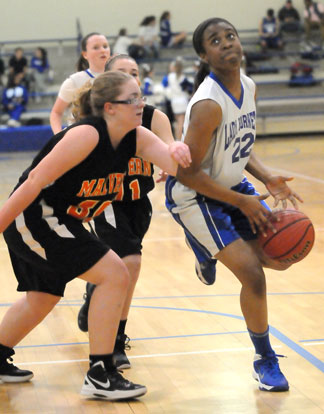 Jalen Sparks makes a move to the basket for Bryant White. (Photo by Kevin Nagle)

The Lady Hornets held Malvern without a point through the first half while building an 18-0 lead and getting playing time for most of the team. By the end, everyone got into the game.

Even after Malvern finally broke the ice, the Lady Hornets reeled off a 13-0 run.

Though she didn’t score, Paige Adams did a nice job handling the ball, contributing a number of assists.

Malvern suffered 33 turnovers in the contest.

“Our team gave a great defensive effort,” said Lady Hornets coach Kenny Hays. “Once again, our bench play was very strong. It really helps our team when we can go deep into our bench and there is no let up in intensity and consistency. The girls continue to be unselfish on offense, which helped our team have some easy scoring opportunities. We do need to continue working on our free throws because we missed several. Other than that, it was a solid performance.”

Loveless scored off a feed from Adams to open the game. Stephens added her free throw and, later, dished to Loveless on an inbounds play for a bucket that made it 5-0. And when Sparks took a pass from Adams and scored, it was 7-0 going into the second stanza. 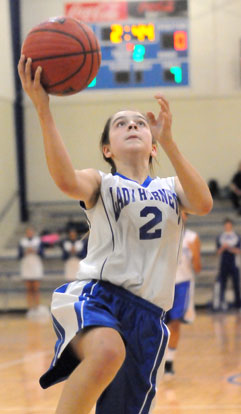 Kelly Williams drives in for a layup after making a steal during the second quarter of Monday’s game. (Photo by Kevin Nagle)

Greenwood canned a 12-footer to start the scoring in the second quarter. Loveless made a steal and was fouled. Though she missed the front end of the one-and-one, Lizeth Hernandez rebounded and passed to Loveless who had jumped into the lane for a short shot that made it 11-0.

A steal and layup by Williams added to the onslaught. Later, Greenwood swiped the ball and fed Bonvillain for a bucket. In the final minute of the half, Miller drained a baseline jumper and Bonvillain hit a free throw to make it 18-0.

Malvern scored the first two baskets of the second half but Williams got Bryant White going again with a pair of free throws. Loveless added a bucket and two more from the line to make it 22-4. It was a 20-point lead when Adams assisted on a basket by Sparks. And when Sparks posted up for a bucket in the final seconds of the third quarter, it was 26-4.

To open the fourth period, Miller popped a 15-footer, Bonvillain hit a free throw and Hutchins scored off an inbounds play to make it 31-4.