After trailing the Bryant White Hornets of Bryant Middle School 12-0 at the half, the Wildcats had opened the second half with a touchdown drive and a two-point conversion to cut into the margin.

On the ensuing kickoff, Bryant’s Cory Nichols made a tackle-breaking return of 50 yards only to have most of it negated by an illegal block in the back. So, instead of possession in North Little Rock territory, the Hornets were pushed back to their own 13.

And they went three-and-out.

On first down, Larry Wilbourn lashed for 13 yards to the 22 but that’s where the Hornets’ defense rose up. Jaylon Russ led a charge that stopped Wilbourn with a gain of 1 yard. Torrence Moore got 7 yards on second down to set up a third-and-2 at the Bryant 14.

But Russ and Gunnar Givens dropped Malachi Gober for a loss of 3 on third down as the third quarter ended.

When North Little Rock decided to go for it on fourth-and-5 at the 17, quarterback Christopher Foster started to roll out to the left but stumbled and fell. Bryant took over on downs at the 22.

A holding penalty negated half of Chris Gannaway’s third-down run for a first and, moments later, the Hornets were punting it once again.

This time, the Wildcats got the ball at the Bryant 49 with 4:37 to play. Will Cornelius stopped Wilbourn’s first-down run after 2 yards. Foster then threw a swing pass to Gober only to have Braylen Montgomery and Trayton Russ there to bring him down as he got the ball but a loss of a yard.

On third-and-9, another swing pass, this time to Wilbourn was stopped for another loss by a bevy of Bryant defenders.

Down to their last shot, the Wildcats tried to throw deep, but Moore dropped the pass and Bryant took over on downs with 2:50 left to play.

Though a 50-yard touchdown run by Martavian Earl was negated by yet another penalty — this time, a false start — the Hornets were able to eat up the clock and claim a 12-8 victory. Earl’s 11-yard run to convert a third down clinched the victory after North Little Rock’s final timeout.

Gannaway rushed for 86 yards on six carries and Earl added 76 yards on nine tries plus two touchdowns for Bryant White, which improved to 2-1 this season going into game at Conway White next Thursday.

The Bryant defense held North Little Rock to a net of just 62 yards of offense, which included seven lost-yardage plays out of 25 snaps.

The Hornets opened the game with a strong drive from their own 30 to the North Little Rock 11, where they went for it on a fourth-and-6 and wound up losing 4 yards as the Wildcats took over on downs.

Gannaway had a 25-yard run and Earl went for 16 along the way.

After forcing a North Little Rock punt, the Hornets got the ball back at the Wildcats’ 49. Nichols completed back-to-back passes of 15 yards to Jordan Knox and 10 yards to Jaylon Brown to set up Earl’s 26-yard touchdown run.

An extra-point attempt was foiled by a high snap.

North Little Rock went three-and-out again. Gabe Allen had a pass break-up, Ivory Gilmore stopped a run for 1 yard then, on third-down, Brown and John Ede stopped a pass completion short of the first down.

After the punt, Gannaway broke a 40-yard run to the North Little Rock 19. A play later, he got 11 to the 5 and, on consecutive carries, Earl got to the end zone. He scored from the 3.

Two of North Little Rock’s final three plays of the half, lost yardage. Joshua Moore made one tackle then, on third down, Givens and Jaylon Russ sacked Foster.

North Little Rock’s touchdown drive to start the second half was sparked by Moore’s 20-yard run. The Wildcats reached the 8 and lost a yard before going to the air and scoring on Foster’s pass to Deontae Young.

Young ran in the two-point conversion to make it 12-8. 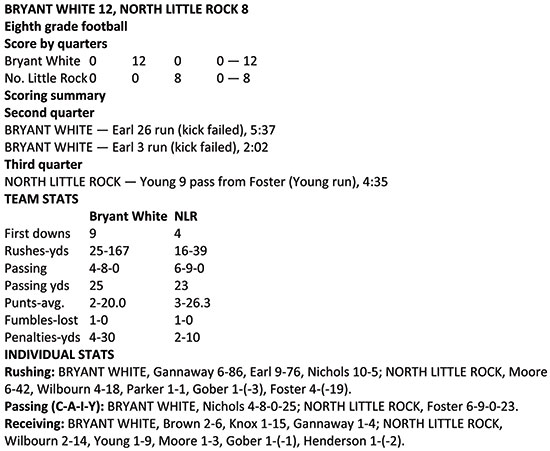