NORTH LITTLE ROCK — Trailing 8-6, the Bryant Hornets freshman team was in the process of driving for a go-ahead touchdown midway through the second quarter. They’d forced a short punt by the North Little Rock Junior Charging Wildcats, gaining possession just 46 yards away.

Two runs by Fabian Torres picked up a first down at the Wildcats’ 33. But, on the next play, the ball came loose, and North Little Rock’s Tavion Akins scooped it up and raced to the other end for a touchdown and a 14-6 lead.

Then, in the final 30 seconds of the first half and the first minute of the second half, North Little Rock scored three times to build the lead to 34-6 on their way to a 34-13 win in the Central Arkansas Junior High Conference showdown on Thursday night.

Now 2-2 overall, the Hornets are 1-2 in league play going into next Thursday’s contest at home against Conway Blue.

Bryant’s response to the scoop and score was undermined by a holding penalty at midfield. Quarterback Carson Burnett kept for 10 yards to make it a third-and-3. A slight bobble of the snap on the third-down play undercut the timing of the third-down snap and Burnett was dropped for a 10-yard loss.

So, the Hornets punted it back to North Little Rock with 3:56 left in the half.

The Wildcats drove 67 yards in 10 plays. They faced third down three times on the march. On third-and-6, quarterback Jordan Kelly completed a 22-yard pass to Akins. On third-and-3 at the Bryant 33, Felix Wade broke a 32-yard run to the 1.

There, the Hornets nearly made a stand. On first down, Jonathan Grayson was stuffed by Gavin Burton. On second down at the 2, Johnny Lewis was stopped at the 1 by Jason Shifflet and Brandon Jones.

But, on third-and-goal, Lewis barely got in amid the traffic inside and Bryant trailed 20-6.

The game got away when Wade returned the second half kickoff 71 yards for a touchdown and, on Bryant’s first snap of the second half, Jeremiah Sims intercepted a pass, setting up a 39-yard touchdown pass from Kelly to Lewis. Wade ran in a two-point conversion just 53 seconds into the second half.

The Hornets opened the game with a strong drive, aided by a pass interference penalty against the Cats. After driving to the North Little Rock 24, Bryant faced a fourth-and-2. Fabian Torres appeared to power for the first down but, an unkind spot left the Hornets a yard short and the Wildcats took over on downs.

Two plays later, Lewis was stopped for no gain on a third-and-1 at their own 32 by Octavio Resendiz and Jones.

The Wildcats decided to go for it on fourth down. With the middle was clogged, Lewis bounced outside and raced 68 yards for a touchdown.

Bryant struck right back. A 53-yard pass from Burnett to Turner Seelinger reached the North Little Rock 6. On the next play, Torres powered in for the TD.

A penalty moved the two-point conversion attempt back 5 yards and, subsequently, the Hornets were unable to convert as a pass fell incomplete.

Andrew Stueve booted the kickoff into the end zone for a touchback and the Charging Wildcats began on their own 20. Three plays netted 2 yards as defensive back Lawson Speer made a strong open-field tackle on first down.

The short North Little Rock punt followed, which led to the scoop-and-score.

The Hornets cut into the lead early in the fourth quarter. With North Little Rock working in reserves, the Hornets drove 46 yards in four plays. Burnett had 13-yard keeper and Torres rumbled for 19 to set up his 7-yard touchdown tote.

Stueve added the extra point and the final score was on the board with 6:47 left in the game.

The win for North Little Rock snapped a losing streak to Bryant that dated back to 2010. 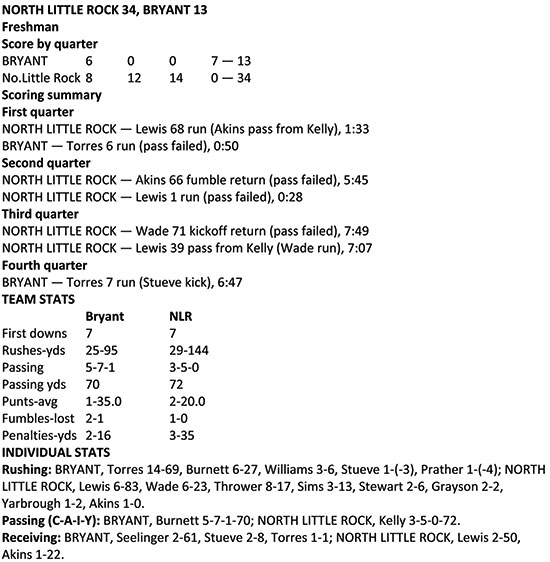