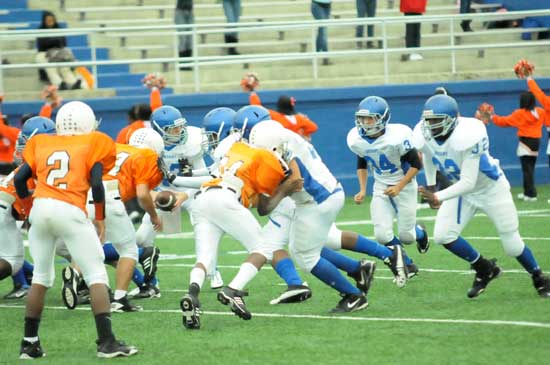 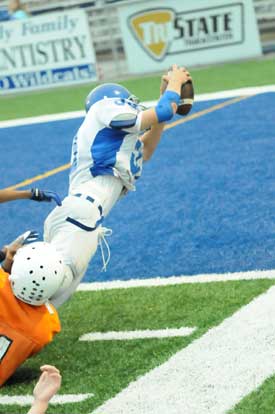 The Hornets had led the seesaw battle 12-6 at the half. Both teams were struggling to slow down the other’s offense so there was every reason to believe the Hornets would counter and regain the advantage.

Starting after an unsuccessful onside kick by the Rams, the Hornets’ second play broke big. Tailback Drew Alpe blasted his way for 25 yards to the Ridge Road 22.

Only to have a holding penalty negate the play.

A few plays later, the Hornets faced a fourth-and-8 at the Rams’ 46 and Alpe broke loose again. His 32-yard gallop reached the 14-yard line. But, again, a holding penalty negated much of the gain.

Still, they had a first down at the Ridge Road 35. Alpe rambled for 14 yards then Demaja Price’ pounded for 7 more to the 14.

Again, however, a holding penalty — this time at the end of the play — pushed the Hornets back to the 24.

And, though they had overcome the previous two mark-offs, they couldn’t this time, turning the ball over on downs with 6:55 left to play.

It certainly appeared that the officials had their eyes out for holding penalties. Ironically, however, all four of those they cited along the way were against Bryant.

On the Rams’ ensuing drive, they marched to the Bryant 43 where fullback Kelante Montgomery picked up 5 yards on a third-and-8. As Bryant’s defense converged on Montgomery, a blocker for the Rams actually grabbed the Hornets’ Ethan Burnett around the waist and pulled him away from Montgomery. Perhaps it was too obvious for anyone to see because there were no flags.

Nonetheless, the Hornets held on a fourth-down run and took over with 2:47 left in the game. From the 36, Alpe crashed for 6 yards but, on the next play, he was hit just as he took the handoff. The ball came loose and Ridge Road’s Marlin Jenkins won the scramble for the loose ball with 1:53 to go.

The Rams, running a tight double-wing formation that featured dives, traps and power sweeps, ran out the clock from there to hold on for a 14-12 win in the season finale for both teams.

Ridge Road piled up 211 yards rushing including 102 by wingback Robert Knowlin and 89 more by Montgomery.

Alpe finished with 142 yards and a touchdown on 17 carries.

The difference in the game was Ridge Road’s one successful two-point conversion.

On a cold, wet evening, both teams were plagued by fumbles early on. A fumbled snap ended Bryant’s first possession but the Hornets got the ball back with a fourth-down play by the Rams was sabotaged by a fumbled snap.

In turn, Bryant drove from its own 35 to the Ridge Road 26 where, on first down, a fumbled snap lost a yard, though Burnett was able to recover for the Hornets. Price followed with a 7-yard run that would’ve reached the 21 had an illegal block in the back was called. That put Bryant in a second-and-16 hole at the Ridge Road 33.

Quarterback Jaret Jacobs tried to get that back on the next play but his throw was intercepted inside the 10 by Carlton Burton and returned to the 18.

But, on the first play from there, Burton took a pitch and was pounded by Alpe. Price swooped in to help out, grabbed the ball out of Burton’s arms and sprinted 20 yards for the game’s first score.

A try for two failed but Bryant led 6-0.

Ridge Road answered with a 80-yard march on 10 plays. Knowlin made both big plays on the drive. The first was a 29-yard run into Bryant territory. The second came on a fourth-down pass from the 31. He was rolled out of bounds at the 1 but, on the next play, Montgomery scored to make it 6-6.

Quarterback Malik Stewart completed another pass to Knowlin for the two-point conversion but it was negated by penalty and, a second attempt failed as Bryant’s Quinton Royal broke up the pass.

With the game even and just :56 left in the half, the Hornets began the ensuing possession at the Ridge Road 43. Alpe rumbled for 11 yards and, a play later, appeared to have 7 more only to have a holding penalty push them back.

With time nearly out, the Hornets faced a fourth-and-13. Alpe got the call and, with a relentless effort, he dashed and crashed 34 yards for a go-ahead touchdown to give the Hornets the 12-6 advantage they enjoyed at the break.

Ridge Road got the football to start the second half and marched 60 yards in just four plays capped by a 29-yard bolt by Montgomery who rode his offensive line’s wedge for 10 yards before he broke into the clear.

And when Burton ran in the two-point conversion, the final score was on the board at the 5:37 mark of the third quarter.

The Hornets’ second concluded with a 3-3-1 record.