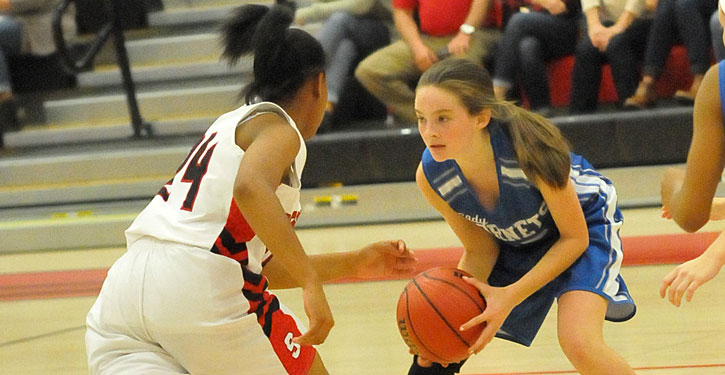 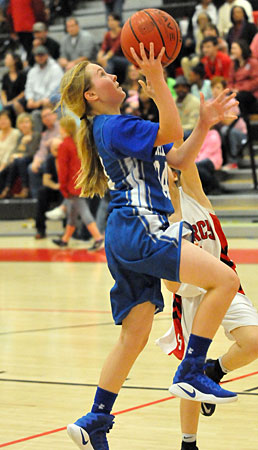 Kaitlyn Weng drives to the basket. (Photo by Kevin Nagle)

SEARCY — In the first three minutes of their season-opening game against the Searcy Ahlf Junior high Lady Lion Cubs Thursday night, the Bryant White Lady Hornets eighth grade team of Bryant Middle School found themselves 12-0. A hot-shooting Searcy point guard pumped in a pair of 3’s and scored all 12 of those points on her way to a 20-point night.

The Lady Hornets rallied to take a lead and trailed just 18-17 at the half, sparked by Kaitlyn Weng who scored 10 of her team-high 16 points in the first half including a 3-pointer and a three-point play. Her 5 points and a basket by her sister Kristyn Weng had Bryant with 12-7 by the end of the first quarter.

Dinine Robinson hit a 3 and Lauryn Taylor had a basket in the second quarter to help bring the team back.

Searcy put together another surge in the third quarter to push the advantage to 30-23.

In the fourth, Robinson was fouled on a three-point shot and converted all three free throws. Taylor added a basket but the Lady Hornets were unable to come all the way back again, absorbing a 37-28 loss. 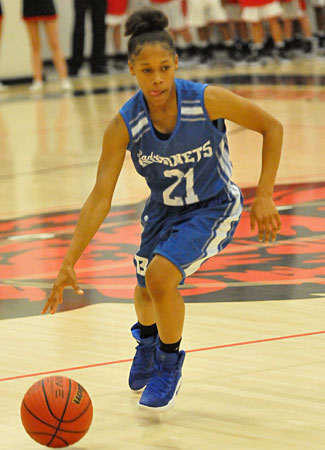 Jaiyah Jackson works the ball up the floor. (Photo by Kevin Nagle)

“Their point guard is a great player,” said Bryant coach Ben Perry. “She couldn’t miss. We couldn’t stay on her defensively. Eventually I called timeout and put one of our fast defenders on her no matter where she went and we shut her down pretty good and we caught back up.

“We started pressing full court and caused some turnovers and we started getting up,” he added. “Early in the second half, we suffered some turnovers, just threw the ball away and they put a run together. We were playing catch-up from that point on.”

“Searcy, that’s a solid team,” the coach said. “Their coach said they’re better than they even know they are.”

“I’m proud of the girls,” Perry said of Thursday’s contest. “I thought they played hard. They adjusted well. We’ve got to work on getting back and getting our defense set up, getting off screens and setting good, tight screens, being smart with the ball. Turnovers really did us in.

“But getting the first-game jitters out of the way,” he added. “I’m glad we played a tough team like this first game. It lets us know where we’re at. We can build from here.” 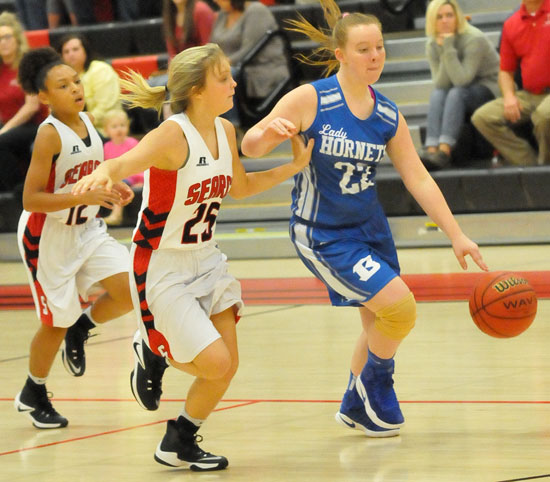