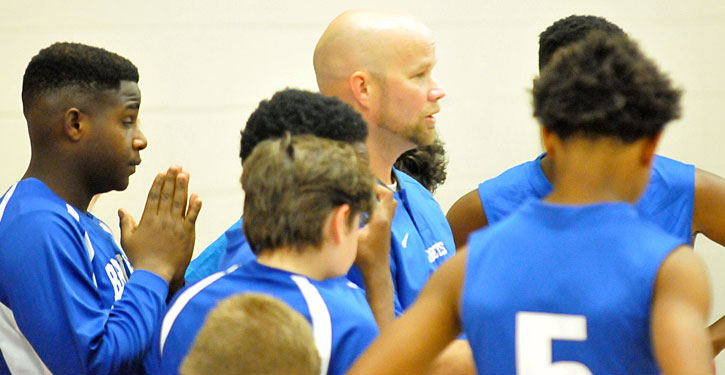 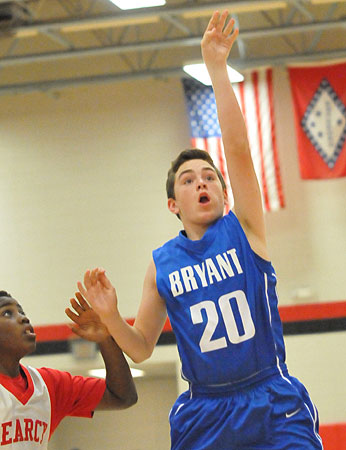 Aiden Adams tosses up a shot. (Photo by Kevin Nagle)

Their lead was never less than 15 points the rest of the way in a game that wound up a 57-30 win.

“For our first game, the boys came out and played really well,” said Hornets coach John Harrison. “We set the tone early defensively.”

The Hornets led 19-4 at the first break. Searcy had suffered more turnovers (11) than shots attempted (6). 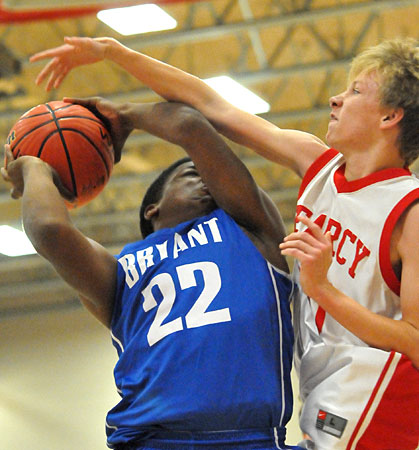 Connor Coleman (22) is hacked as he goes up for a shot inside. (Photo by Kevin Nagle)

“Cameron Hunter, Aiden Adams and Austin Ledbetter led the way with getting their hands on passes and being very active in our press,” Harrison noted. “Gavin Brunson and Myles Aldridge controlled the paint inside and both did good job of talking on defense.

“We also got great play from our bench,” he noted. “Josh Turner, Trey Miller and Clay Curtis played really well along with Caleb Goins. Every kid on the roster saw action and I am very encouraged by the effort we displayed defensively.”

The onslaught began with a free throw by Brunson. When he missed the second shot, Aldridge rebounded and scored. A pair of layups by Adams around a stickback by Ledbetter made it 9-0.

Aldridge hit a pair at the stripe before Adams canned a short jumper. Hunter scored on consecutive possessions, driving to the rack to make it 17-0. 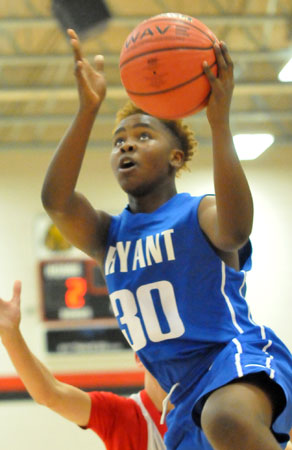 Jeremiah Trezvant drives to the hoop. (Photo by Kevin Nagle)

Searcy finally broke the goose egg with a layup off a Bryant turnover with 1:32 left in the opening quarter.

Harrison worked in 11 players in the first quarter and one of those guys, Trezvant, hit the offensive glass and scored to make it 19-2.

Adams opened the second quarter with a drive for 2. Brunson scored inside and, after a free throw from Searcy, Turner fired in the first of his two 3-pointers. The second came after Searcy managed a basket, making the Hornets’ lead 29-7.

Miller added a 3 in the final minutes of the half as Searcy rallied to within 32-15 at the half.

The Cubs scored first in the second half but before they could score again, the Hornets had pushed the margin to 41-17. Hunter had two baskets during that push and Aldridge had a three-point play and a driving layup.

Before the third quarter concluded, Hunter drained a triple and Miller followed up with a three-point lay to make it 49-21. 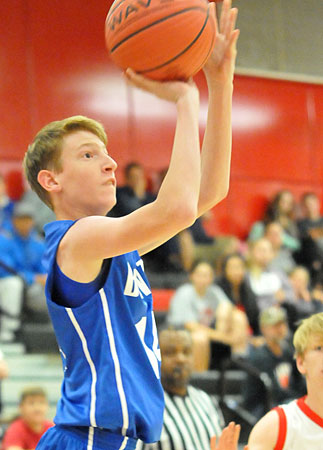 Searcy suffered 26 turnovers in the game and only hit 9 of 21 shots from the field. Bryant finished with 10 turnovers and shot 23 of 51 including 6 of 17 from the 3-point arc. 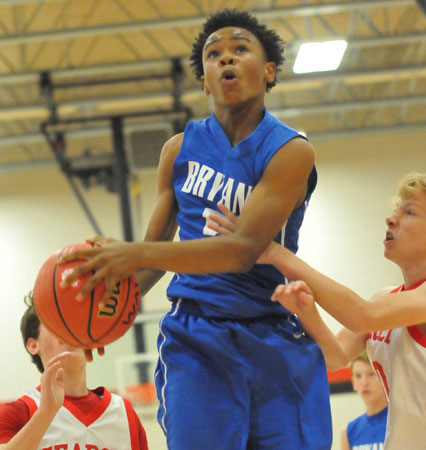 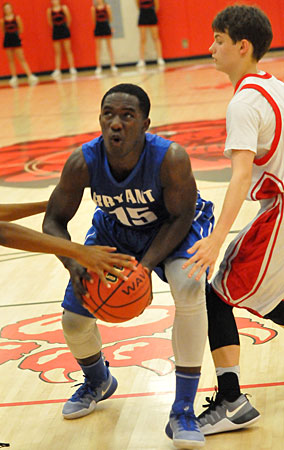