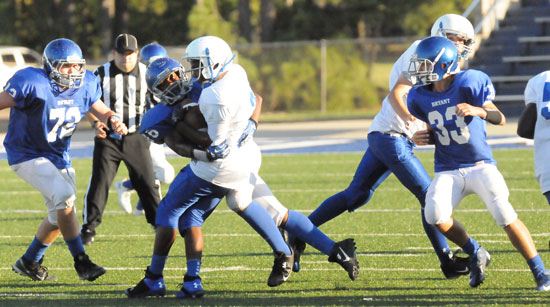 Trailing 22-8 with 4:14 left in the first half, the Bryant White Hornets eighth grade team had a hill to climb against the North Little Rock East Charging Wildcats Thursday night. But even more quickly than the Wildcats had grabbed that lead, Bryant overcame it with an 18-point blitz before the half on the way to a 32-28 win in a wild game that featured kickoff returns for touchdowns to open both halves. 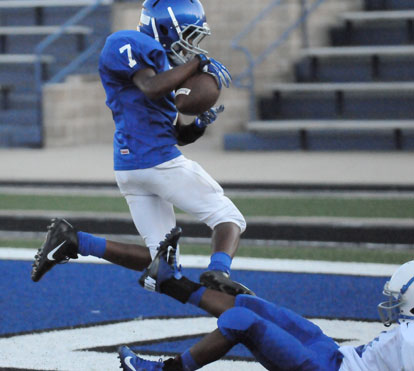 Hornets receiver Aaron Griffin (7) juggles what turned out to be a touchdown pass that gave his team the lead in the final seconds of the first half. (Photo by Kevin Nagle)

“It was a total team effort,” said Hornets coach Brad Smothermon. “We had people get hurt, catch cramps, and everything else but their backups stepped in and played hard.

“The whole team grew up a lot tonight,” he asserted. “To have the opening kickoff returned for a touchdown then an interception then a touchdown on Lakewood’s first possession — they had to overcome a lot and settle down and stick to our plan.”

Indeed, North Little Rock’s Deontae Montgomery returned the opening kick 75 yards for a score. Then five plays into Bryant’s first possession, Erion Cooney intercepted a pass and returned it 79 yards for another score. The Hornets got a reprieve when much of the return was negated by an illegal block but the Wildcats got the touchdown anyway a few minutes later when quarterback Weston McGhee completed a 29-yard pass to Montgomery.

Marcus Christopher added a run for a two-point conversion after the first score then Caleb Agee tacked on two following the second so it was 16-0 going into the second quarter.

Bryant responded with its own touchdown drive, which featured the running of James Polite and quarterback Tristan Calhoun. The lone pass of the march was a 7-yard completion from Calhoun to Neal Brenton to convert an early third down. The big play came moments later when Polite broke a 22-yard run.

Calhoun eventually scored on a third-down keeper at the 1. He then threw to Aaron Griffin for a two-point conversion to make it 16-8.

An onside kick was covered the Wildcats at the Bryant 47 and, on the first play from there, Christopher bounced off a pair of tacklers in the backfield and shot down the right seam for a 47-yard touchdown run that made it 22-8 with 4:14 left in the half. 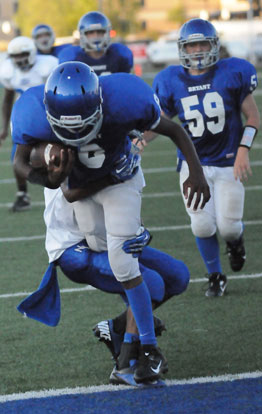 Bryant White running back James Polite leans into the end zone after taking advantage of a block by teammate Jonathon Harrell (59). (Photo by Kevin Nagle)

A face mask penalty on the first play, a Calhoun run, helped. On a third-and-7, Calhoun kept for 15 yards. On a third-and-15 from the 30, he went to the air and found Keshaun Davis behind the defense for a touchdown.

Though the run for two failed, the Hornets were within 22-14 but there was just 1:38 left in the half.

Incredibly, they would add two more touchdowns in that time.

An interception by Polite got the ball back with 1:22 to go. Calhoun and Davis hooked up again for a 52-yard play. Davis was shoved out of bounds at the 7.

The Cats foiled a Polite run on first down there, dropping him for a loss but, after a Hornets timeout with :41 to go, they went to him again and he slashed 11 yards into the end zone with :36 left, cutting the lead to 22-20.

A two-point conversion pass that would’ve tied it, fell incomplete but, on the ensuing kickoff, another onside kick, Dylan Lawhon pounced on the ball for the Hornets at the North Little Rock 42.

Two incomplete passes followed before Calhoun tossed to Davis to convert another third down. Bryant White used its final timeout with :13 showing, time for a throw or two toward the end zone.

It took just one. Griffin went up between two defenders and hauled in Calhoun’s fade pass for the touchdown from 24 yards out with :07 on the clock.

And when Polite returned the kickoff to start the second half 75 yards for another TD, the Hornets held a 32-22 advantage over the stunned Charging Wildcats.

North Little Rock East didn’t surrender by any means. In nine plays, the Cats drove 55 yards for an answering touchdown. The march nearly came to an early end when the Hornets’ A.J. Todd forced a fumble. But Montgomery was able to fall on Christopher’s mistake. 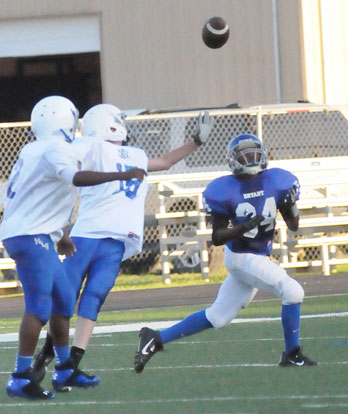 Keshaun Davis (34) got behind the North Little Rock East secondary for 102 yards in three receptions Thursday. (Photo by Kevin Nagle)

Even then, the Cats faced a fourth-and-4 at the Bryant 23. That’s when Montgomery slashed 20 yards to the 3. Christopher scored on the next play. The two-point conversion pass was knocked down by Brenton.

With 2:31 left in the third quarter, Bryant White was clinging to a 32-28 lead. There seemed to be a lot of time for more scoring and North Little Rock East got opportunities but the Hornets’ defense stepped up at the end.

The Cats gained possession with 2:16 left in the third on a fumble recovery at the Bryant 17. Christopher appeared to have a go-ahead touchdown on the first play from there but a holding penalty negated most of the run.

On first down from the 24, Johnny Wallace, who had a tremendous game for the Hornets, dropped Christopher for a loss of 6. On the next play, it was Bryce Thomas who brought down McGhee for a loss.

So, facing a third-and-28 at the Bryant 35, the Cats went to the air only to have the ball knocked down. And when a fourth-down pass fell incomplete, the Hornets took over on downs with 1:04 left in the third quarter.

East made a stand on defense and with 6:20 left in the game, the Cats had the ball back at the Bryant 42. Christopher converted a third down with an 18-yard run to the 23 but that’s where the Hornets made their stand. On fourth-and-9, Christopher was smothered by Wallace and Trace Tally after a 1-yard gain and Bryant White took over with 2:44 left to play.

The Hornets ate up the clock, aided by a face mask penalty and, later, on a fourth-and-4 at their own 42, Isiah Ash broke a 14-yard run to dash all remnants of hope for the Wildcats.

Meanwhile, North Little Rock East, after accumulating 105 yards of offense in the first half, mustered just 78 in the second.

“I couldn’t have been more excited for those boys to experience a win like that,” Smothermon commented. “Those games are memory makers for sure.” 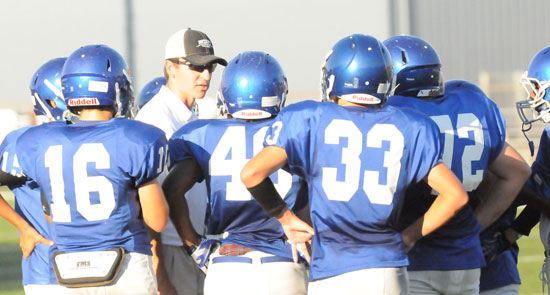 At halftime of Bryant White-NLR East game
Freshman dance, cheer perform at half