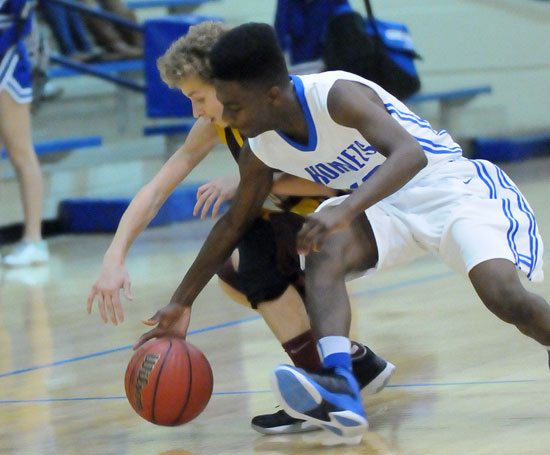 It took a little while for the Bryant White Hornets eighth grade team of Bryant Middle School to get going on Monday night. But when they did, it resulted in a spree that put them in position to forge a 33-22 win over the Lake Hamilton Wolves eighth grade team. 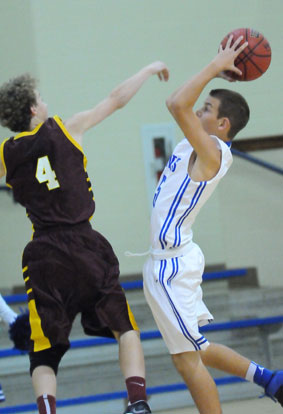 Bryant White fell behind 6-0 over the first five minutes of the game but when Kaelon Jones scored inside to break the ice with 54 seconds left in the opening quarter, it started a 29-6 blitz through the first minute of the fourth period.

Lake Hamilton made a late push but never got the lead back under double digits as the Hornets improved to 2-1 on the season going into tonight’s contest against Conway Blue.

Though he missed much of the first half in foul trouble, Tristan Calhoun poured in a game-high 14 points including a trio of 3-pointers — two of those while being fouled — to pace the Hornets. Brooks Ellis added 5 with JonLuke Sprout and Brandon Hill adding 4 each. Jones and Grayson Prince added 2 apiece with James Polite and Scott Schmidt contributing a free throw each.

Bryant White hit just 12 of 32 shots from the field and only 5 of 14 from the free-throw line but forced 22 turnovers while collecting 11 offensive rebounds to produce twice as many shot attempts as Lake Hamilton could muster.

Calhoun scored in the final seconds of the first quarter to make it a 6-4 game. In the second period, Prince scored off an inbounds pass to tie it then Schmidt hit a free throw to give Bryant White its first lead.

After the Wolves regained the upper hand with a pair of free throws, Sprout drained a 3 and the Hornets were ahead to stay. 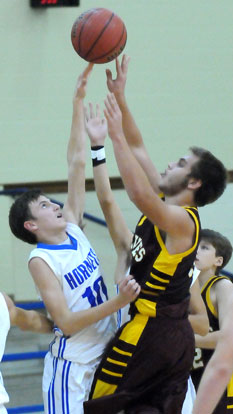 Ellis added a basket then, in the final seconds of the half, Hill made a steal and followed his own miss with a basket to set the halftime score at 14-8.

When the third quarter started, Polite hit a free throw then Schmidt fed Ellis for a basket as the lead grew to 9. Lake Hamilton scored but a free throw by Ellis and a layup off another steal by Ellis gave Bryant White its first double-digit lead, 20-10 with 3:33 left in the half.

The Wolves countered with a basket but the Hornets then put together a 9-0 run with Calhoun accounting for all of the points. He hit a 3 with :30 left in the third quarter then hit another one while being fouled as part of a 4-point play to start the final stanza.

Calhoun followed up with a steal and a layup that made it 29-12 and forced a Lake Hamilton timeout.

The Wolves held Bryant White scoreless over the next three minutes, closing the gap to 29-18 before Calhoun flushed another long 3 while being fouled with 2:53 left in the game. Though he missed the free throw that would’ve produced another 4-point play, it was enough to keep the Hornets ahead. Sprout would add a free throw with 2:15 left. 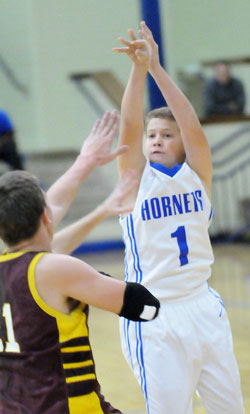 Scott Schmidt puts up a shot for Bryant White. (Photo by Kevin Nagle)