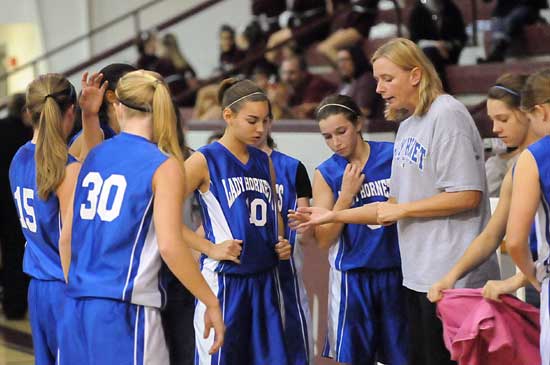 BENTON — An 8-0 run during the early stages of the second half gave the Bryant White Lady Hornets eighth[more] grade team the upper hand and they kept it the rest of the way in a 29-23 win over the Benton Lady Panthers on Monday night. 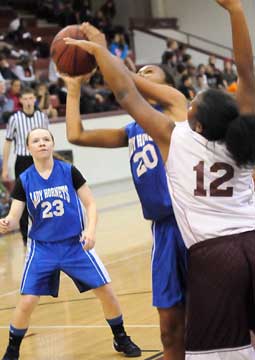 The Lady Hornets, fresh from winning the Panther Pride Classic at The Anthony School, improved to 3-1 on the season going into the Thanksgiving break. Their next game will be Tuesday, Nov. 29, at Bauxite.

The game was close for most of the first half. In the opening quarter, they led 5-2 after a steal and layup by Skylar Davis, who led all scorers with 14 points to go with eight steals and four rebounds.

A free throw by Abbie Clay in the final minutes was followed by a steal and basket by Morgan Neathery, tying the game going into the second quarter.

And when Neathery hit a 3 to start the new stanza, Benton had its first lead.

It grew to 12-7 before Bryant put the clamps down and held the Lady Panthers to 2 points over the final 4:50 of the half.

“We were a little off tonight,” commented Bryant White coach DeAnna Ward. “Our shots were not falling and Benton’s defense kept us scrambling. We had way too many turnovers. Walks killed us in the first half.

“But we adjusted at halftime and were able to settle down and run an offense in the second half,” she noted. “We were able to get some steals off the press and score to stay ahead.” 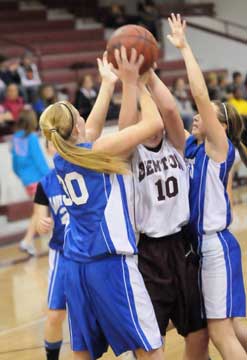 Lara White started Bryant’s first-half rally with a free throw. Faith Brown grabbed an offensive rebound and was fouled with 3:49 to go. She converted once to trim the lead to 3.

The Lady Hornets forced a turnover and White was fouled again. She converted twice and it was 12-11. A free throw by Davis tied it.

Clay interrupted the run with a short jumper to put her team on top for the last time. The Lady Panthers had chances to add to the advantage but couldn’t get it done before Davis made another steal and a layup to knot it at 14. Brown’s basket inside moments later, put the Lady Hornets on top 16-14 at the break.

Clay and Neathery led Benton with 7 points each in the game but a basket to start the second half was the last the Lady Hornets allowed either of them to score. It tied the game one last time before Bryant’s game-turning run. A drive up the baseline by Davis got it started. Julie Ward followed her own miss to bump the lead to 20-16. Bryant forced a turnover and Brown cashed in to make it a 6-point advantage.

It stayed that way for a while as both teams scrambled for shots. Finally, Davis and Ward combined on a steal that Davis turned into a layup to cap the surge with 2:19 left in the third quarter.

By the end of the period, The Lady Panthers had whittled the margin to 24-20 and, after a free throw by Ward to start the scoring in the final period, a Benton basket cut it to 25-22.

But that’s as close as the Lady Panthers could get. Benton was held without a field goal over the final 4:50 and Bryant finished with baskets by Davis and Brown.

To go with Davis’ 14 points, Brown finished with 7. White and Ward finished with 3 each. Ward led the team with six rebounds to go with a pair of steals. White and Brown had three boards while Shayla McKissock contributed four rebounds and a steal.