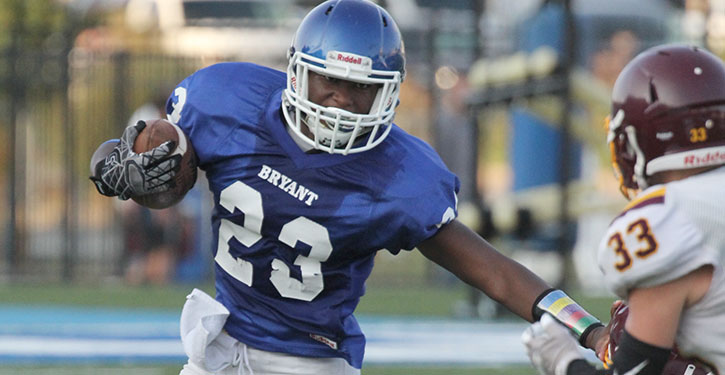 Yet, the Hornets came away with a 20-6 victory by bending but not breaking on defense until the fourth quarter, scoring on defense, and hitting a few big plays among those 17 snaps.

Bryant’s Myron Thrash scooped up a fumble and returned it 63 yards for the lone score of the first half. He then capped off the scoring in the fourth quarter with a 6-yard run, set up by Daniel Anderson’s 33-yard gallop.

In between, Anderson caught a 15-yard touchdown pass from RonRico Simmons, moments after Simmons found Tristan Knox for 32 yards.

Lake Hamilton rushed for 161 yards on 41 attempts, led by Hayden Barton with 81 stripes on 16 totes. But the Wolves were unable to complete a pass, only attempting three. Three of their first-half possessions ended with the Hornets making fourth-down stops. They also stalled on their first series of the second half before taking advantage of an interception to drive for their lone score with 3:05 left to play.

That made it 14-6 at the time. But Bryant White answered with a three-play drive covering 50 yards after covering an onside kick.

Anderson broke his 33-yard run then Simmons, spurred by a big block from Thrash, got to the 6 to set up Thrash’s rushing touchdown.

To start the game, both teams turned it over on downs. Lake Hamilton went for it on fourth-and-4 at its own 30 but Barton was stopped for no gain by Thrash and Cairo Terry.

When the Wolves got the ball back, they picked up a first down behind the running of Barton and Dylan Murphy. They reached the Bryant 37 where Moore knocked the ball out of Barton’s arms leading to Thrash’s scoop and score.

Neither team could get much going over the final 6:03 of the half. Terry and Jaden Jackson had big stops to keep the Wolves in check.

Bryant White got the ball to start the second half. After picking up a first down at the Lake Hamilton 47, Simmons found Knox. A play later, Anderson hauled in the touchdown pass. Nick Baker caught a pass on the two-point conversion, and it was 14-0.

Lake Hamilton used up the final 4:26 of the third and first 1:22 of the fourth driving from its own 34 to the Bryant 24 where the Hornets thwarted them. A fourth-down pass was knocked down by Ethan Ledbetter and the Hornets took over.

But Simmons tried to go deep on the next play and was intercepted by Chris Chancellor who returned the ball to the 33. It took six plays, but the Wolves found the end zone. Quarterback Landon West scored from the 1.

The win improved the Hornets to 2-1 on the season going into a game at North Little Rock on Thursday, Sept. 24.