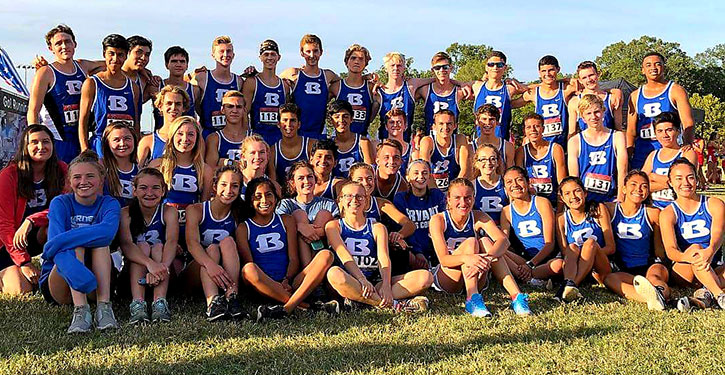 With four runners in the top 10, the Bryant Lady Hornets captured the 2018 6A-Central Conference cross country championship at Bishop Park on Monday while, in the boys division, Bryant’s Chris Barrientos pulled away at the midway point to run away with the individual 6A-South Conference championship as the Hornets finished as runner-up to Conway in the team standings.

“We kind of played it off like we wanted it to,” said Lady Hornets coach Keith Dale. “About this time of year, we’re trying to peak. Conference and State time is when we really want to get the girls really running the best that they can. Every one of my top 10 runners are all peaking right about now. I had some drop 45 seconds and I had others drop two minutes yesterday, which is exceptional.

“I told the girls before we got on the line — because we’ve kind of been nip and tuck with Conway and Cabot all year long — I said, ‘They’re coming for us. So we’re just going to have to get out and compete well. We’re going to have to do the best we can to run in packs and just try to do the best we can. And when it comes down to the end, look for anything in red or another color and do what we can to pass them.”

Dale pulled up four freshman to the team and they helped.

“Kim really did well and so did Margo and McKenzie Hicks,” he said. “They’ll run in the State meet also.”

“I’m really proud of Chris Barrientos for stepping up and running his best race of the season,” said Hornets coach Steve Oury. “It was fun to watch.

“Hats off to Conway for running a great race,” he added. “They were the team to beat and they ran very well. We had personal records across the board, so I’m very pleased with our performance. We are going to work very hard to prepare for the state meet and see how we stack up there.”

The Class 6A State meet will be held on Saturday, Nov. 2, at Oaklawn Park in Hot Springs.