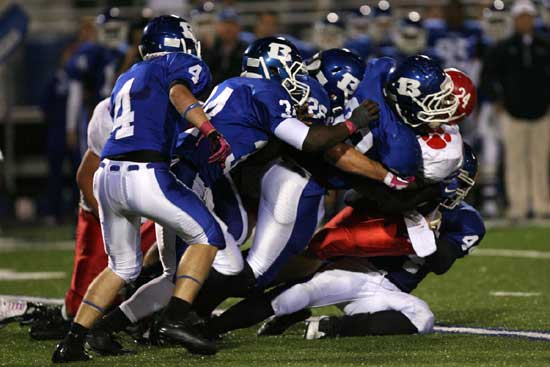 The seed was planted early on. Before the[more] game, in fact. 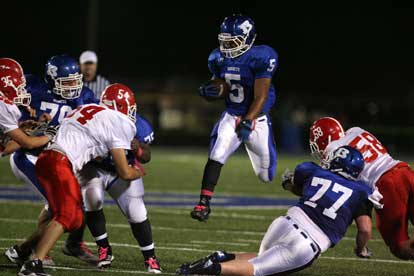 It’s not unusual really. Prior to any game, coaches visit with the officials and, often, ask them to watch for this or that, usually a subtle violation that the opposing team has a habit of committing and getting by with most of the time.

Such was the case when Bryant Hornets head coach Paul Calley met with the officials of his team’s 7A/6A-Central Conference game against the Cabot Panthers on Friday night. Calley mentioned the fact that, over the years, he and his coaching staff had noticed that Panthers defenders would latch onto a potential pass receiver, sometimes taking them to the ground before they can run their pattern. 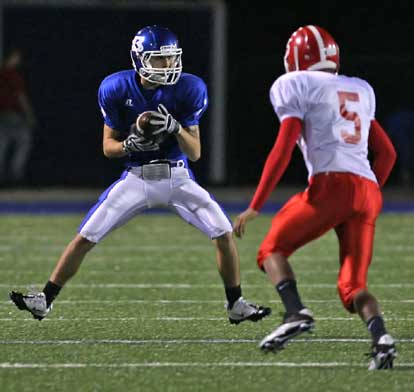 As Friday’s game unfolded, Calley and his staff continued to point out the infraction (among others) as all coaches tend to do, but nary a defensive holding penalty was forthcoming.

Until, with less than 30 seconds left in the game, Bryant quarterback Hayden Lessenberry was forced to scramble on a third-and-15 from the Cabot 33. The Hornets were trying to drive for a score to snap a 28-28 tie. Lessenberry found 11 yards to the 23. With fourth down coming up, it figured that the Hornets would bring on star place kicker Jace Denker for what would’ve been a 40-yard field goal. It was certainly in his range. 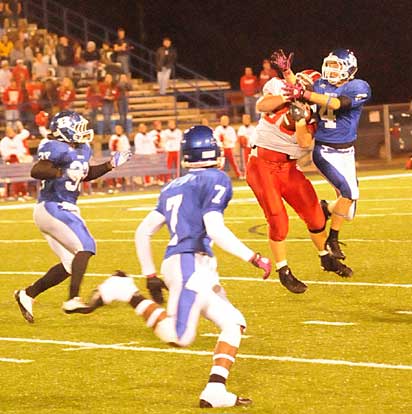 But a flag came down. It was holding, according to the preliminary signal from the lead official. If it was against the Hornets, they’d be pushed back to the 32 where, if they didn’t pick up some yardage on the repeat of the down, would’ve left Denker facing a 49-yard attempt.

The call, however, was against the defense — the very call the Bryant coaches had been lobbying for. After the mark-off to the 13, Lessenberry clocked the ball with :11.6 to play. Denker came on and, after a Cabot timeout, drilled a 31-yard field goal with :06.4 left, providing the winning margin in the last few seconds for the second week in a row. His 39-yarder gave Bryant a victory at Conway the previous Friday, coincidentally, by the very same 31-28 score.

And, oh, yes, the game-winner against Cabot came on the North end of the field, towards the “enchanted” end zone. (For some history on the Hornets’ special North end zone, go here.) 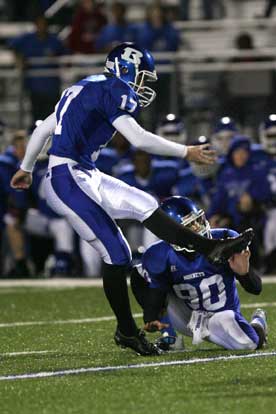 The win kept the Hornets alone atop the Central standings at 5-0. They’re 7-1 overall with a showdown at North Little Rock up next. The Charging Wildcats are 4-1 and 6-2.

Despite that dismal record, the Panthers were tough Friday, rallying from a 28-14 deficit in the second half to tie the game with 2:14 left.

It was also, however, a continuation of the penchant Bryant has, according to Calley, of playing to the level of its opposition. Even so, the Hornets have found a way to win seven of eight games and, in the lone loss, might’ve pulled it out with just a little more time.

The game-winning drive came after the Hornets thought they’d pulled ahead on an 82-yard kickoff return for a touchdown by Dillon Winfrey. But a penalty for an illegal block in the back wiped out the scoring sprint. It also left the Hornets at their own 9.The game-winning march began with Lessenberry’s 9-yard completion to Aaron Bell, in for the winded Winfrey. Lessenberry then scrambled for a first down at the 24. Hayden Daniel turned a short completion into a 17-yard gain to the 41.

A pair of incomplete passes followed so the Hornets faced a third-down. Lessenberry, who finished 15-of-27 for 228 yards in the game, found his favorite receiver on this night, Sawyer Nichols who also turned the short completion in an 18-yard gain. 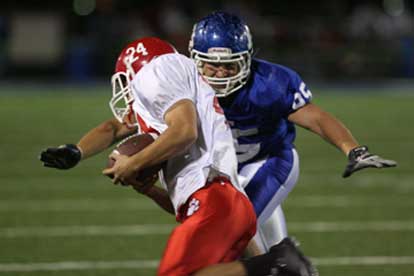 A play later, Lessenberry and Nichols combined for 12 yards to the Cabot 28.

Nichols had a big night with seven receptions for 144 yards, with a lot of that coming on some nifty running after the catch.

In position for a 45-yard field goal, the Hornets worked to get closer. But a 5-yard loss on a run by Karon Dismuke put the success of the drive in real doubt, producing a third-and-15 at the 33.

After a timeout with :31.2 on the clock, Lessenberry’s 10-yard scramble and the penalty occurred on the next snap. 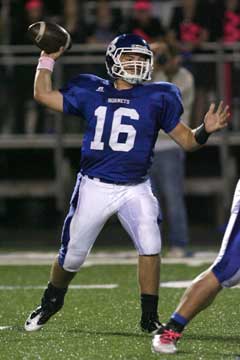 The Hornets, in much the same position as they were in 2010 after a double-overtime win against Conway, must’ve felt a little déjà vu early. As in their 21-9 loss at Cabot, the Hornets opened the game with a drive that threatened the end zone. They reached the Cabot 33 but then had a pass completion negated for a rare offensive pass interference penalty. The similarity to the 2010 game occurred when, trying to make a big play deep, Lessenberry’s pass was intercepted.

And just like then, Cabot marched for a go-ahead score, covering 62 yards in 13 hard-knock plays. They even overcame a holding penalty that negated a touchdown. On a third-and-14, Zach Launius broke a 24-yard run to paydirt.

With Cabot’s time-munching, persistent and physical ground game, it’s a position a team wants to avoid, i.e., trailing the Panthers.

But the Hornets answered with a 75-yard drive. The key plays were completions to Daniel and Nichols that each turned into big plays. Daniel’s picked up 21 yards then Nichols’ added 33 yards to the Cabot 2. From there, Jalen Bell wriggled into the end zone for the touchdown. Denker’s PAT tied it. 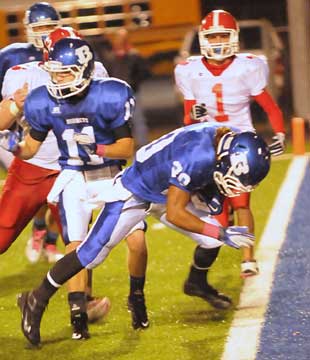 Both teams followed with strong drives that threatened to produce points. But Bryant’s defense made a stand at their own 35. Cabot, however, got it back when the Hornets were unable to convert a fourth-and-8 at the Panthers’ 25.

Cabot quarterback Zach Craig ran for 8 yards to the 33 and, from there, Launius broke through the pile at the line of scrimmage and went the distance and the Panthers led 14-7 with 9:36 left in the half.

Bryant came right back, however, with a 64-yard scoring drive on eight plays. An 18-yard completion from Lessenberry to Dismuke provided the first big play. Still, the Hornets faced a third-and-5 st the 26 when Dismuke broke a 17-yard run to set up Jalen Bell’s 9-yard slash.

Denker’s extra point tied it with 7:06 left in the half.

And, after his kickoff into the end zone for a touchback, the Hornets forced a three-and-out and the first punt of the game.

Keith Pledger’s kick was downed at the Cabot 48 and the Hornets took their first lead with a four-play drive aided by a late hit out of bounds at the end of a 6-yard run by Dismuke. From the 19, Bell wove his way to the 7 and, from there, Dismuke scored.

Walter Dunn made a big hit on the second-half kickoff and Cabot started the first series from its own 17. The Panthers picked up a first down but, eventually had to punt. 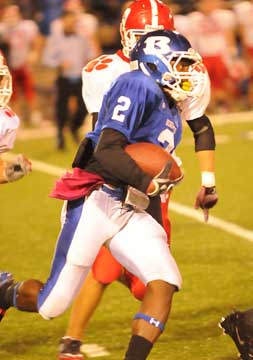 The Bryant offense returned to the field at their own 4 but soon faced a third-and-12 from the 39. Once again, Lessenberry found Nichols who made two defenders miss and sprinted down the right sideline before being knocked out of bounds at the 7. A play later, Lessenberry snuck it in from the 1 and, with Denker’s extra point, it was 28-14.

Initially that margin resulted in the Panthers breaking up the dead T and going to the air. Craig completed a 5-yarder to Weston Conrad but a pair of incompletions followed and the Panthers punted again.

The Hornets went three-and-out as well and when the Panthers got the ball again, it was back to the grinding ground game. They drove to the 1 where the Hornets’ defense made a bid for a goal-line stand but, on a fourth down, Launius got through for his third TD of the game.

The Hornets proceeded to drive to the Cabot 24, within range for Denker but, a second down run by Dismuke lost four yards then Lessenberry took a shot at Nichols in the end zone only to have the Panthers’ Jordan Burke intercept.

He ran it back out to the 21, setting up Cabot’s game-tying march, which took 14 plays. Thirteen of those were rushes, the longest of 11 yards. The 14th was actually the opening play of the drive, a 20-yard completion from Craig to Pledger.

From the 8, Cabot faced a third-and-six. Conrad got the call and found the end zone with 2:14 left to play.

Initially, the Panthers lined up to go for a two-point conversion to try to win it then and there but, after a hard count failed to get the Hornets to jump offside (shortening the yardage needed for the conversion), Marquez came on to kick the extra point, tying the game.