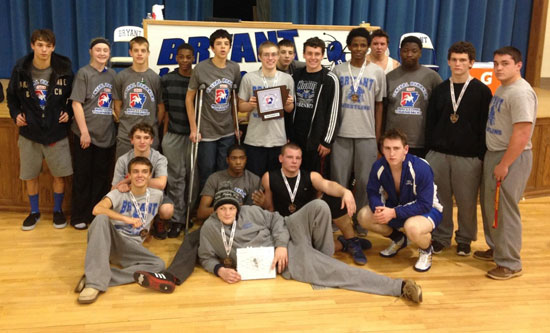 Kyle Thompson captured a conference crown in the 152-pound division and the Bryant Hornets had 11 wrestlers place in the top four as they finished as the runner-up in the team standings at the Central Arkansas Conference Tournament at Bryant Middle School gym on Saturday, Feb. 1.

The Hornets were also led by seniors Ben Freeman and Austin May, who each reached the championship bout in their respective weight classes. Freeman was the runner up in the 126-pound category while May was runner up in the 195-pound division.

Completing Bryant’s stellar work were Dalton Griesmer who was fourth in the 285-point division; Bryce Denker, fourth at 170; and Ross Smith, fourth at 120.

The Hornets are scheduled to host a match with Pulaski Academy and North Little Rock on Tuesday. They’ll travel to the Dual State tournament at Russellville this Friday and Saturday.