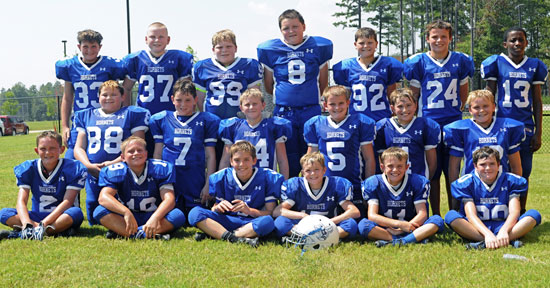 The Bryant Junior Hornets 9- and 10-year-old football team improved to 4-0 as it heads into a showdown with the North Pulaski Ducks this Saturday.

Two weeks ago, the Hornets moved to 3-0 after they beat Jacksonville White at Bryant Stadium 42-0 as the defense kept up it stellar season by holding Jacksonville to minus-38 yards total offense on only nine offensive plays.  As for the offense, it racked up 176 yards and six different players scored in a totally over-matched situation.

This past weekend, the Hornets moved to 4-0 after beating Sherwood 44-6 at Mayflower High School. The offense put on a show after the defense gave up only its second first down of the year and first points allowed on the season.

Christian Cain got the scoring started for Bryant after the Sherwood score with a 70-yard kickoff return for a touchdown and, after recovering the onside kick, he went 25 yards for another score.  On the day, Cain finished with 116 yards on only six carries with three touchdowns.

After the game Coach Ledbetter was asked how the rest of the season was looking and he said, “We take it one week at a time and anything can happen, but if there is a better 9-10 year old team in the state I would be very surprised.”

The Junior Hornets get back to work Saturday at 11:30 a.m., at JA Fair High School against the North Pulaski Ducks who just knocked off the only other undefeated  team in the Central Arkansas Youth Football League (CAYFL) last weekend.