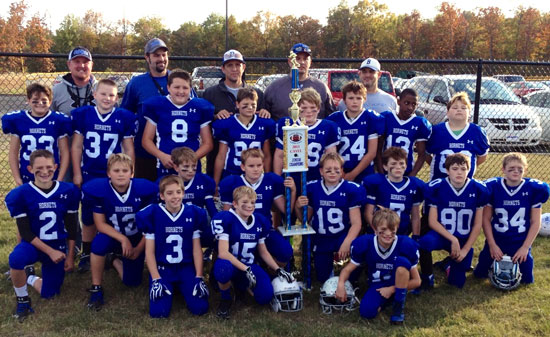 The game was decided pretty quickly as Bryant took the opening kickoff, drove down the field and scored on a Cain TD run to stake Bryant to a 6-0 lead. The defense gave up only the eighth first down of the season on the next series but forced a turnover. Bryant went right back down the field behind the offensive line of Miller, Pritchard, Purdy, Robinson, Feimster, Seelinger and Shelnut, which has been outstanding all season. Ledbetter scored on 3 yard run. At half, it was 14-0 and there was no looking back for the Hornets from there.

The defense, led by game MVP Brayden Godwin, dominated like it had all year creating three more turnovers while holding the Black to a net of minus-34 yards for the game. Ryan Riggs scored on a 22-yard TD pass and Hayden Brent topped off the scoring with a 3-yard run to put an end to the scoring.

On the year, the Junior Hornets outscored their opponents 422-6, outgained them 2600 to minus-96, and the defense also scored 32 points while amassing a whopping 33 turnovers in 12 games.

“This is the best defense I have ever seen,” said Scott Turner, director of the CAYFL, after the game.

The team also finished the season as the third-ranked team in Mississippi, Arkansas and Louisiana by the National Prep & Youth Football Association and received an invitation to Atlanta to play for the 10-and-under youth football national championship.