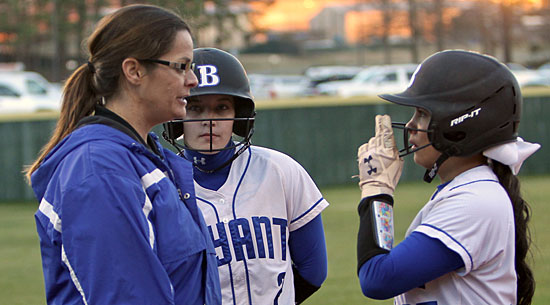 Bryant softball coach Lisa Dreher instructs a pair of her players early in the 2016 season. (File photo by Rick Nation)

Dreher was UCA’s first softball signee when the program began in 1996, the first college softball program in the state. She was a four-time, first-team All-Gulf South Conference selection and an NFCA All-Region selection. When she signed up to play fast-pitch at UCA, she had never played anything other than slow-pitch

She finished her career with 157 hits and a .344 batting average and holds the school record with a 19-game hitting streak.

“It’s been an honor to be recognized by UCA,” Dreher said. “They have always treated me like family and last weekend was no exception. I was humbled to be there with six other amazing individuals and hearing their stories.”

Dreher came to Bryant to teach Special Ed but was asked by then athletic director Tom Farmer to take on the softball program. In six seasons, she led the team to a 124-54-1 record. The Lady Hornets reached State all six years and wound up in the State finals three times.

After stepping down as head coach after the 2009 season, Dreher continued to teach and returned to coaching the Lady Hornets last spring, leading them to a 20-13 record. They made the quarterfinals of the State Tournament, losing a heartbreaker to eventual champion Bentonville, 4-3, in eight innings.