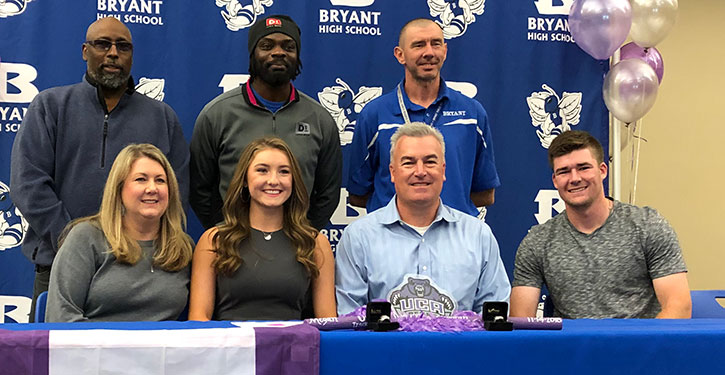 If her efforts in the Bryant Lady Hornets’ track meets didn’t garner enough attention from college recruiters, when Megan Lee, as a junior last spring, finished eighth in the Arkansas High School Heptathlon, certainly garnered the interest of those next-level coaches.

And, on Wednesday, Nov. 14, that recruiting concluded with Lee, the daughter of Mike and Catrena Lee (and the sister of Washington Nationals’ pitching prospect, Evan Lee), signed to continue her track career and her education at the University of Central Arkansas in Conway.

She joined Lady Hornets teammate Deborah Shaw in the signing with UCA.

“Meagan’s a good multi-event girl,” he added. “Last year and the year before, it was hard to really focus on figuring the whole thing out as far as the Heptathlon goes because we only do it once a year in the state of Arkansas. But when you get into college, it’s every track meet.

“I think, with practice, being as good as she is with all the variety of events, she’s going to make them a good multi-event specialist,” the coach added.

“I started track in seventh grade because all of my friends were trying out and I just wanted to do what my friends were doing,” Lee related. “I tried out and I started off being pretty decent and I would win my little seventh-grade meets with the events I was in.

“Both of my parents went to UCA so I’ve always heard about the college around my household,” she mentioned. “They wanted me to go visit it and I wasn’t really interested in it. I was pushing it away as much as I could.

“I’d kind of been in contact with (Arkansas State) a little bit. I had been looking at all my options. But, once I went to UCA, I fell in love with it. I met the coaches and they were so nice and the teammates — they just really wanted me to come there. I just loved everything about the campus, so it wasn’t really a hard decision to make.”

And her academic interests fold right into the decision.

“I want to be a Kindergarten teacher, so I want to go into early education and they’re a great teaching school,” Lee explained. “So that works out perfectly for me.”

Lee will often compete in five or six events in a Bryant meet. Her favorite event?

“That’s hard, probably, the 400 or, this season, I’m switching over to 300 hurdles,” she related. “So, we’re exploring that a little bit because I have to do hurdles for the Heptathlon. So, it’s extra practice.”

“I think Megan will be top five this year,” Dale said of her return to the Heptathlon. “The places where she has struggled has been high jump and the shot and the disc, which most of the girls are going to. Her high jump has been a lot better in the past, but she’s developed some little kinks where she drops as she comes over the bar. We’ve already started to make that transition. She’s already working to get out of that habit.”

“Heptathlon drains your energy, but it is so much fun,” Lee stated. “It’s the best two days of the whole entire year. You just wake up and you’re just so excited to go out there and compete against some of the best athletes in the state. It’s just two days of just so much stuff packed into it. It’s just awesome. I just love everything about it.”

“In the relays, she has a lot better split but that never calculates into the personal records,” Dale mentioned.

The tradition is rich in that event in the history of the Lady Hornets’ program. Zhania Hall, Amanda Burt and Ella Reynolds joined Lee in winning the 4×400 at the 2018 Meet of Champs. Their time of 3:58.99 was a season best and close to setting a school record.

“We lost one person, Amanda Burt, but we have some young girls that we’re mentoring right now and really working with them to get them up to where she was,” Lee continued. “We’re going to have to fill her spot but that person’s going to be good.

“They want to see it go down,” Dale acknowledged. “They set those goals and they’re going to do what it takes.”