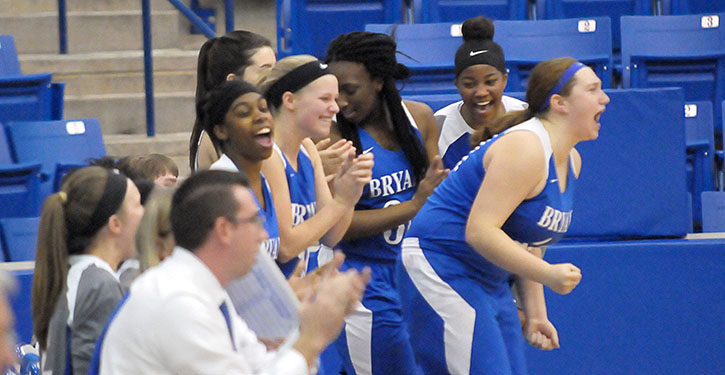 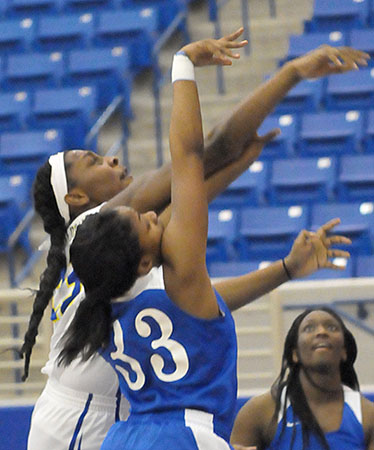 NORTH LITTLE ROCK — Tyianna Robinson’s nickname is “Taco” and on Monday night it could’ve been Taco Grande as she scored 22 points and made nine steals to lead the Bryant Lady Hornets freshman team to a convincing 43-21 win over the North Little Rock Charging Wildcats freshmen.

It might be called Stop Number One on the Lady Hornets’ Payback Tour as they avenged one of their three losses on the season. North Little Rock had defeated Bryant 38-30 on Dec. 1.

The other two stops on the Tour will be against Conway teams starting with the Conway Blue squad that remained undefeated in the Central Arkansas Junior High Conference (12-0) with a 44-22 win over Cabot South on Monday. Conway Blue edged the Lady Hornets 26-21 on Dec. 5 at Conway.

Bryant’s third loss came to Conway White, 35-28 on Jan. 5. Their rematch will wrap up the regular-season on Feb. 9. 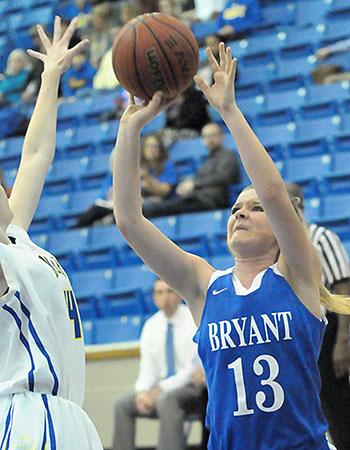 The Lady Hornets, now 9-3 in the league and 16-3 overall, will need some help to catch Conway Blue in the CAJHC standings but they are now just a game behind North Little Rock for second place. Conway White, also 9-3 in the conference, is tied with the Lady Hornets after defeating Cabot North, 51-23, on Monday.

In the opening moments of the second quarter, North Little Rock’s Ashanti Bachus hit a 3 to trim Bryant’s lead to 8-7. But that wound up being the last field goal for the Lady Cats until a buzzer beater to end the third quarter.

Over the final 5:47 of the second quarter and the first 5:59 of the third, North Little Rock was limited to three free throws as the Lady Hornets turned that one-point margin into a commanding 29-10 lead.

“I think the girls have really committed themselves on the defensive end,” said Lady Hornets coach Nathan Castaldi. “It’s not me versus you, it’s all five of us working together. We are aggressive and we do take chances and we do get beat some. But there’s somebody behind them to help. We’re rotating off the back side and we’re just really doing it together.”

The last North Little Rock lead was 4-2 just over a minute into the game. Neither team scored again until just 1:15 remained in the opening quarter. That’s when Robinson made a steal and Ivory Russ was fouled on an offensive rebound. She tied the game with her free throws. 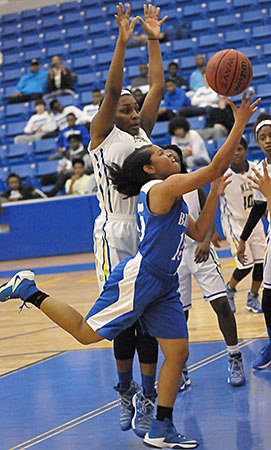 Celena Martin drives around a North Little Rock defender and puts up a shot. (Photo by Kevin Nagle)

Robinson made another theft and it resulted in a trip to the line for Celena Martin. She converted as well and the Lady Hornets were ahead to stay.

And when Robinson beat the buzzer with a basket off a feed from Martin it was 8-4 going into the second stanza.

After Bachus hit a 3, Tierra Trotter started Bryant’s blitz with a 3. After a North Little Rock timeout, Martin made a steal that led to a basket by Trotter on a nice turnaround shot from near the left block.

A free throw by Russ kept the run going. Robinson’s third theft resulted in her short jumper making it 16-7. Robinson’s layup with 1:22 left in the half added to that.

With 1:12 to go, North Little Rock ended a scoring drought of 4:35 when Adia Carnegie hit a free throw.

At the other end, however, Robinson drained a 3. Bachus countered with a pair at the line but Trotter hit the front end of a one-and-one to make it 22-10. Robinson hustled after the carom off her missed second shot and was fouled. She hit one of her free throws to make it 23-10 going into the half.

“When you make shots, everything kind of opens up,” Castaldi noted. “The first few minutes, we still struggled. We got the ball where we wanted, got it inside, and still had trouble with their size, I think. They made us struggle when we got it inside.

Ivory Russ tries to gain control of the ball as she looks to score. (Photo by Kevin Nagle)

“The second quarter, we knocked some shots down, got some easy looks out in transition,” he mentioned. “I think that gave us a little confidence to go from there.”

Robinson recorded her fourth and fifth steal during the opening moments of the third quarter but the Lady Hornets were unable to cash in. Nearly two minutes into the half, Robinson managed to get to the free-throw line where she converted twice to extend the run.

Again there was flurry of activity with no scoring for the next two minutes. Russ’ steal and layup made it 27-10. Robinson’s sixth steal led to a drive to the bucket for a 29-10 lead with :12 left in the third quarter.

Bachus then provided North Little Rock with its first points of the second half when she hit her buzzer-beating 3. 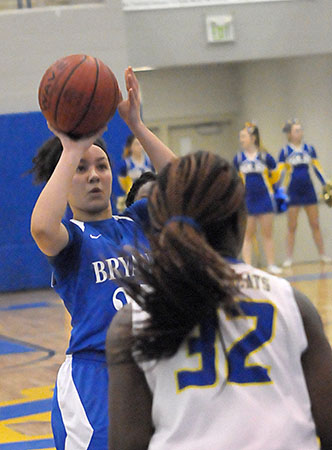 Her final steal resulted in a layup with :56 to go., extending the margin to 23. Castaldi turned to reserves at that point and Sierra Trotter finished off the scoring for the Lady Hornets.

Tierra Trotter and Martin finished with 6 points each. Russ had 5 to go with seven rebounds. Kinley Oholendt, with six rebounds and some tough defensive work, drew praise for the Bryant coach.

“Kinley did great,” he said. “She’s undersized. She’s playing the post for us. Usually she has to guard their biggest player. I think tonight she was giving up five or six inches and maybe 50, 60 pounds with that. She just battles every possession. She getting where she’s supposed to be and doing everything she can.”