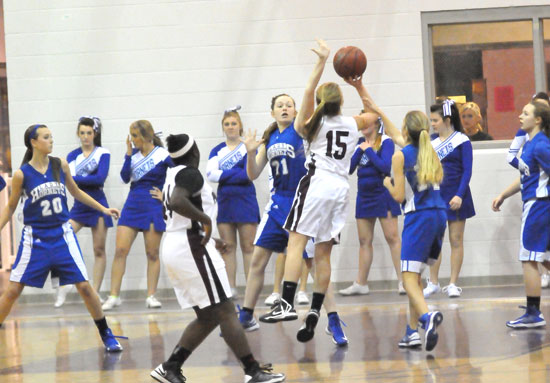 BENTON — The Bryant Lady Hornets freshman team had built a 21-10 late in the third quarter[more] but as the fourth quarter unfolded, it felt like the momentum was swinging the way of the Benton Lady Panthers. 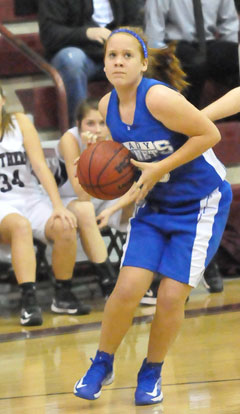 Benton had closed the gap to 21-16 and for nearly four minutes the two teams scrambled with neither changing the score. Bryant had come up empty on six straight possessions, Benton the same but, as the aggressor trying to make the comeback, the Lady Panthers seemed to be on the verge of breaking through.

But, with 1:41 left in the game, Bryant’s Anna Lowery found herself left of the free-throw line with a clear path to the hoop. She drove in and was cut off, but took a short jumper. The ball found the bottom of the net as Lowery was fouled. When she added the free throw to complete the three-point play, the resulting 24-16 lead proved to be just enough.

On the heels of a disconcerting 27-3 loss at home to Cabot North just days before, the Lady Hornets bounced back with a 24-20 win over their rivals to even their Central Arkansas Junior High Conference record at 1-1.

“We talked about, that game’s behind us and tonight’s a new night,” recounted Lady Hornets coach Nathan Castaldi. ““We talked about trusting ourselves and going back to where we were at this time last week. Obviously, Thursday (against Cabot North) was a bad night but before that we won four straight. We just needed to get back to doing those things that we know we’re capable of doing."

The win improved the Lady Hornets to 8-10 on the season with five wins in their last six games going into Thursday’s home contest with Lake Hamilton, a team they’ve split two games against this season. The Lady Wolves won 30-14 on Nov. 26 but the Lady Hornets won 25-21 on Dec. 30, in the championship game of Lake Hamilton’s Kameron Hale Invitational Tournament.

“We didn’t turn the ball over as much and, defensively, we made them work,” he explained. “Every basket they made was a contested basket.”

Against Benton, the Lady Hornets were sparked by Britney Sahlmann, who finished with 8 points and 10 rebounds. Six of her points came in the first half as they established the lead.

Benton’s lone lead was 2-0. Skylar Davis dropped a 3 with 3:43 left in the opening period to put the Lady Hornets up for good. Lowery fed Sahlmann twice for baskets and the lead was 7-2. 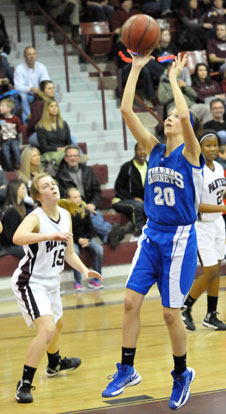 Anna Turpin hit a jumper from the elbow to start the second half and, after Sahlmann had a shot blocked, Turpin was there to grab the ricochet and score.

After Tia Brasell scored for Benton, the Lady Panthers got a chance to cut the lead further but Sahlmann made a steal and scored. Lowery’s steal and layup pushed the margin to double-figures at 19-8.

Brasell, who led her team with 6 points, hit a pair of free throws but Sahlmann fed Davis, cutting down the lane, for a layup to make it 21-10.

In the final 30 seconds, however, the Lady Panthers scored consecutive baskets and when Clay posted up for the first bucket of the fourth quarter, it was 21-16.

Taylor Oglesby made steals on consecutive Bryant possessions but the Lady Panthers were unable to capitalize as the game headed down the stretch.

Bryant led 24-18 with 1:30 left. At that point, Benton had only fouled twice in the half so the Lady Panthers had to foul repeatedly before sending the Lady Hornets to the line. Finally, with :37.8 left, Davis went to the line but the first shot of the bonus opportunity rolled off the lip of the rim.

Oglesby drove for a basket to cut it to 24-20. After a Benton timeout, Castaldi worked up a play that got Davis behind the Lady Panthers’ press. And when her layup attempt refused to fall, Benton had a chance to make it one-possession game. Davis, however, came up with a steal.

With Davis on the floor and the Lady Panthers trying to force a held ball, Castaldi got a timeout with :11 left and the Lady Hornets were able to eat the rest of the clock to finish out the win. 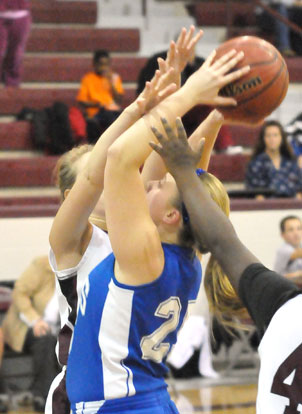