BENTON — with 2:07 left in the first quarter of their Central Arkansas Junior High Conference game[more] against the rival Benton Panthers, the Bryant Hornets freshman team held a 7-4 lead. All three of their baskets had been in the paint. 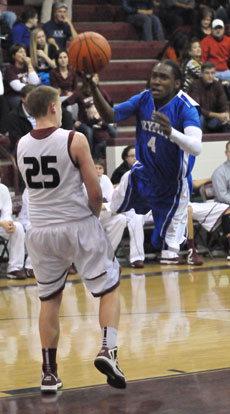 Kevin Hunt scored the first points on a drive to the hoop to start the contest then post Cameron Murray got a feed inside, scored and was fouled. He completed the three-point play and, after a basket by Benton’s Clay Anderson, Hunt fed Jaelynn Jones for a short jumper under the hoop to make it 7-4.

Murray’s basket in particular figured to be significant because it drew the second foul against Benton star Cason Maertens. He went to the bench at that point and didn’t return until the second half.

But, at that point, the Panthers clamped down on defense, camped in the paint to foil Murray and cut off the penetration. The Hornets, left trying to hit jump shots, went through a drought and Benton ripped through a 19-1 run to build a 23-8 halftime lead.

Though the Hornets rallied to within 7 in the fourth quarter, they wound up shooting 25 percent from the field and less than 50 percent at the line — not enough to dig out of the hole as Benton posted a 38-24 win.

The Panthers improved to 2-0 in league play, while Bryant dropped to 0-2. The Hornets will try to get back on the winning track at home on Thursday against another of the league leaders, the Lake Hamilton Wolves. 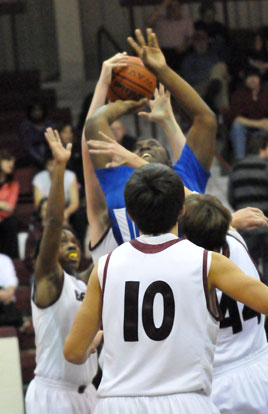 Finishing was a key in Monday’s game at Panther Arena. Benton closed out each quarter well. The tale-tell first half blitz started with three free throws from Westin Riddick, who would lead all scorers in the game with 13 points. Ben Powell, who finished with 9, followed up with a 3 and, with a free throw by Anderson, the Panthers led 11-7 at the break.

Bryant’s lone point of the second quarter came on a free throw by Evan Lee, after he got a nice feed from Simeon Watson. It came with 3:49 left in the half and it had the Hornets within 17-8.

And that was still the score as the quarter reached its final minute. That’s when Riddick dropped a 3-point bomb on the Hornets and Anderson followed up with another with :11 left.

“I think really the whole big part of the game was right there before half,” commented Hornets coach Mike Simmons. “It’s a decent game where we can keep it close but instead of it being 8 or 9, it’s 15. You at least have a decent chance. The kids came back and gave us a chance. (Riddick) hit a couple of big shots for them and so did (Powell).

“They did a good job of taking away Cam,” he noted. “The first time we played them, he had a really good game. So when he caught the ball inside, they had somebody ready there, when he turned, to be in his face. So he was double-teamed most of the night. I wish we could’ve gotten him the ball a little bit more.” 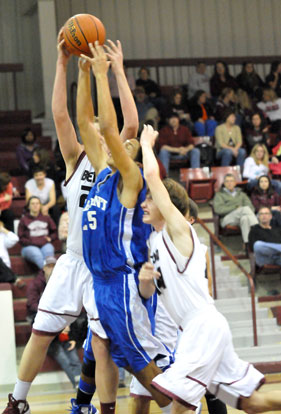 The Hornets whittled the lead to 12 in the third quarter with Kris Croom scoring off a baseline drive and off an inbounds play under the basket. But the Hornets were just 1 of 4 at the line in the period.

That’s when Bryant really began its rally, extending its defense full court and being more aggressive. Hunt start the comeback with a steal that led to a trip to the line for Murray. He missed his second shot but Jones beat the Panthers to the rebound and scored.

The Panthers turned the ball over and Hunt hit a driving jumper to trim the margin to 27-18. Benton coach David Torres took a timeout and, when play resumed, Maertens scored his first basket of the game. But a driving layup by Croom kept the Hornets’ surge going.

After a scramble for a loose ball, Torres changed the dynamic, with some criticism of the officials allowing the more physical play. He drew a technical that allowed Croom to hit two free throws that trimmed the margin to 29-22 but also sparked his team. 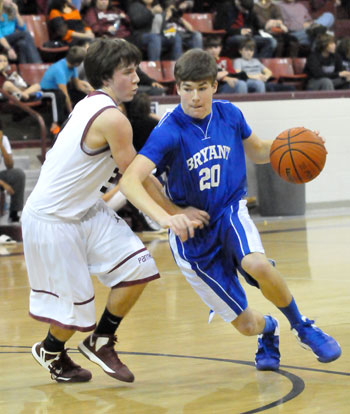 The Hornets frustration welled up after that was they repeatedly got to the rim and not only missed but got no-calls on Benton’s physical play under the basket.

Riddick stepped up with a pair of free throws and a 3 that pushed the lead back to double digits going into the final two minutes.

Simmons protested after Watson made a steal but couldn’t convert. Croom followed and missed. Both wound up on the floor with no call and the frustration spilled over into a technical.

“We got some more stuff out of our pressure than I thought we would, which got us an opportunity to get some easy shots, which we didn’t finish,” Simmons commented. “That gets kids frustrated when they get fouled and there are no calls but you’ve got to keep playing through those. The kids played hard and came back. We lost our composure a little there at the end after a couple of fouls weren’t called but we did a good job of cutting it to 7. Benton’s a good team.”