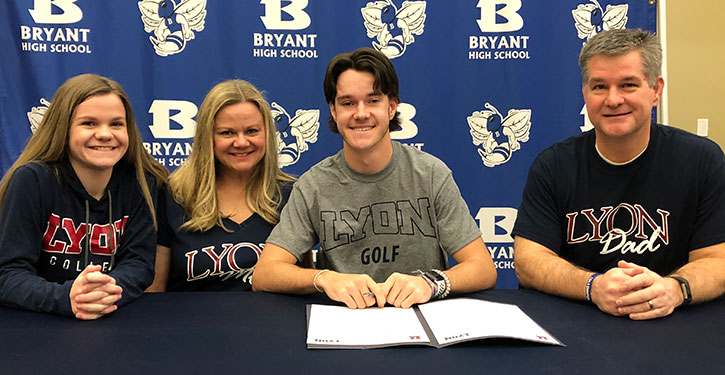 It goes without saying that extra practice, hard work, and determination will make one better at whatever the endeavor.

But that’s easier to say than to do.

Many, many athletes, for example, give that stuff lip service and, consequentially, you never hear about them.

On the other hand, every once in a while, there’s news of someone that reaps the rewards of going beyond saying it to doing it.

On Wednesday, the latest example at Bryant High School, senior Clayton Harbour, the son of Mike and Connie Harbour, reaped the reward by signing a letter of intent to continue his education and his golf career at Lyon College in Batesville.

“I started playing sophomore year,” Harbour related. “I played baseball up until then, through freshman year then, kind of between freshman and sophomore year, I made the transition over to golf and I worked pretty hard at it, in the gym, on the course.

““Lyon is getting a young man that really had very little experience at golf. He came out in the 10thgrade and worked his way down in the 80’s, became our number six guy that year, was an alternate at State,” recalled Bryant golf coach Steve Griffith. “His junior year, he continued to work hard and was down in the mix, was playing three or four.

“And his senior year, through a lot of hard work — he’s one of those kids — you know I’d get (to practice) for a 6:15 a.m. practice and Clayton had been there for 30 minutes already, out there putting and chipping and so forth,” he continued. “And he was our low scorer for the year, won the Simmons Invitational at El Dorado and was always in the mix, shot mid-70’s throughout the year.”

Said Lyon head coach Travis Lauterbach, “He’s going to be a big addition for us and I think he really has just scratched the surface with his game. We’re going to get him to a place, hopefully, where he’s an even better player in a few years than he is right now. That’s the goal and we’re excited to have him and what he’s going to bring to our team.”

Harbour said he picked Lyon over other schools, primarily Coastal George in Brunswick.

“I like the size of it,” he said of Lyon. “It’s small. It feels homey. I like the coach. I think he can really help me improve on the weak parts of my game and it’s strong academically, as well.”

Harbour plans on majoring in Business.

Regarding those weaknesses, he hopes he can work through at Lyon, Harbour said, “The mental side of my game, course management stuff, as far as what clubs to hit off the tee boxes and, mentally, how I control my emotions and stuff like that on the course.”

“I hit the ball pretty far,” Harbour related. “That’s really helpful especially when you play long golf courses. It’s an advantage when you can keep it in play. I feel like I’m really good with my short game inside 100 yards. When you hit it far a lot of times, you’re going to have a lot of wedges in at the hole. So that’s pretty helpful that my wedge game’s good.”

Noted Griffith, “He took a job working at Hurricane (Golf Club), gets there early in the morning before school starts and, one of the reasons he did, was to make a little money like any high school kid wants to do. But also, to get the chance to play a lot of golf. And he’s playing better now than he was at the end of the season.

“He’s a hard-working young man both on the golf course and academically,” the coach added. “One of the things he’s done is he busted his tail on the ACT and improved his score several points and was able to get some additional (scholarship) money there.

“It’s always good to see someone that is willing to do the work, not only on the athletic side but also the academic side,” Griffith concluded. “And it’s going to parlay into an opportunity to play in college up at Lyon. I think they’re getting a good young man.”