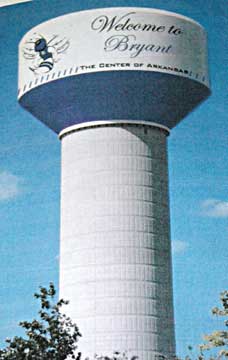 Among the 31 agenda items in a lengthy monthly Bryant City Council session on Thursday night, Bryant aldermen passed a recommendation from the Bryant Water/Waste Water committee logo for a new water tower to be constructed behind Wal-Mart on Highway 5.

The new tower will be 167 feet high and hold two million gallons of water.

"This was just to see which logo we will put on the tower," said Bryant's director of city water/waste water services, Monte Ledbetter. "It will be able to be seen easily from the interstate."

Bidding on the water tank will take place in October and preliminary plans show a 1,600-foot room that will be used for city storage, as well as lights to highlight the new logo and the tower itself.[more]

In other Council actions from their August meeting, City Engineer Richard Penn reported on the stormwater drainage improvements for the Forest Cove area watershed. The objective is to improve the stormwater drainage in Forest Cove, Sunset Meadows, West Pointe, Springhill Acres, Springhill Manor, Sherwood Estates and Northridge subdivisions by identifying specific items, which can be implemented without causing additional harm to upsteam or downstream residents at any point in the watershed. Possible changes included raising detention pond levees to increase storage volume, acquiring land to increase pond sizes or create new detention ponds, increase stream width of the creek through Sunset Meadows, install new drains behind houses to get stormwater underground before running overland into the streets.

• all box culverts for the 50-year design flow are installed and operational in Sunset Meadows;

• the designs for Westpointe Phase III on Independence Drive, and Sedgefield Drive drainage improvements are 100 percent ready to bid;

• the Arkansas Highway and Transportation Department has placed the Hwy. 5 bridge replacement project on the 2010-2013 Statewide Transportation Improvement Plan and construction is set to begin in 2011;

• a grant application through CAPDD and ADEM for improvements to the stream section from Forest Drive to Ashlea Place and for Henson Place south crossing to Hwy. 5 is still being developed;

• a grant application for completing Forest Drive and adjacent stream improvements that includes headwalls, wingwalls, etc., needed additional resolution that was to be considered by the Council;

• on Augusta Cove drainage improvements were bid and a concrete barrier was set at the curb line where the new temporary ditch crosses the street, because of safety issues.

Rodeo Drive short-term improvements for phases 1 and 2 are complete and phase 3 will address the stream areas. The Council approved $5,800 for FTN to develop the phase 3 design. Asphalt shims have been completed at the Four Crossings in Sunset Meadows and driveway replacements due to construction damage are complete in the same area. Approved funding of $225,000 is nearly depleted with less than $1,500 remaining for disbursement.

Other repairs to construction sites at the Four Crossings and streambank stabilization in Sunset Meadows will continue to be made until the remaining funds are spent.

A bid of $150,335.00 for a nine-guage, black vinyl-coated fencing that has a lifetime of 100 years for Bishop Park's baseball and softball fields was passed 6-2 by the Council. The bid was to United Fence.

There was a public hear during the Council meeting that addressed many concerns from citizens.

"It's a recreation area and there is no reason to go through the tragedy my family has gone through," she said. Daily's husband was killed at Midland Park last year when he was caught in a culvert during high flooding and heavy rains.

"We have engineering information on hazardous exposure concerning velocity and flow of water and the idea of building slanted ingrates to be used," Daily said. "We realize there are budgeting issues and cost, but it would be much less than losing a member of the community."

The Council passed a motion to put Daily's information on the next Finance and Personnel meeting agenda.

Steve Glenn of the Bryant Athletic Association spoke about the advertising contracts at Bishop Park.

"This addresses the exclusivity rights of those sponsors," he told the Council. "Our concern from a baseball standpoint is that clause. It's too broad. We rely on sponsors and in order to host a World Series, we have to host three regionals at $3,000 each. We have done two of them and have plans for another, but to host a World Series costs $40,000 by Babe Ruth. To do this, we are going to have to talk to all the sponsors to get money raised for this."

The Council later delayed discussion of the sponsor contracts at Bishop Park until the clauses could be talked about with the sponsors. Currently, Landers, Heartland Bank, Pepsi and Allied Waste have given Bishop Park $20,000 each year for the next five years.

Carla Harris complimented the work of the Bryant Parks and Recreation Department for their work on Bishop Park.

"The Parks Department has done a tremendous job with it," Harris said. "Thanks to Jeremy Lemons and Derek Phillips, I hope the exclusivity is worked out and amended."

Ella Alley of Bryant was also concerned with the exclusivity rights.

"My concern about the loss of revenue is how are we as taxpayers going to keep the park going," she asked.

Scott Pointer of 170102 Alexander Road was concerned with getting the Boys and Girls contract completed.

"I have a second-grader and she loves the Boys and Girls Club,” Pointer said. “I trust them with my daughter and she is my world, so that's saying a lot. My questions are when will it open and what kind of contract will they have? Why can't we have a long-term contract?"

By state law, the City of Bryant cannot enter into a long-term contract with any organization, according to Mayor Larry Mitchell. The contract negotiations for the Boys and Girls Club and the Senior Citizens Center were passed upon contingencies that confusing words and phrases be changed to specify the contract, which states the Boys and Girls Club will pay $1 per year for its existence at Bishop Park.