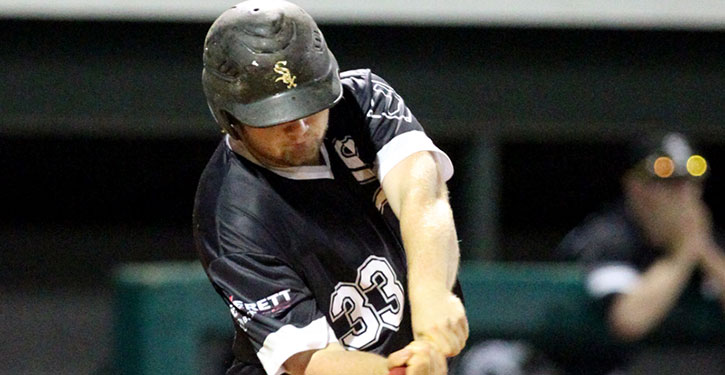 Cabot ekes out victory over Senior Sox behind Brockinton

CABOT — It’s been feast or famine for the Bryant Black Sox Senior American Legion team so far this season. In their three wins this season, they accumulated 28 runs but, in their three losses they’ve managed just four, half of which they scored on Wednesday night in a 3-2 setback against Cabot.

Right-hander Brett Brockinton had the Sox shutout on three hits over five innings as his teammates staked him to a 3-0 lead. Bryant rallied for two in the top of the sixth. The inning ended, however, with the potential tying run at first.

Brockinton set down the Sox in order in the seventh as Cabot held on for the win.

Bryant right-hander Myers Buck blanked Cabot over the first three frames. He pitched around a one-out walk in the first. In the second, Logan Edmonson singled but Buck picked him off and retired the next two to send it to the third.

Neither team managed to get anyone on base in the third and, in the fourth, the Sox were retired in order.

In the home fourth, Brian Tillery singled then Dillon Thomas reached on an error. Eason Seidl doubled in Tillery but the Sox worked the relay to nail Thomas at the plate.

A walk put runners at first and second and there they remained as Buck got Brodey Schluter to ground into a force before finished the frame with a strikeout.

Matthew Sandidge singled to start Bryant’s fifth but nothing came of it.

Cabot added two runs in the bottom of the inning on a trio of singles, a passed ball and an error.

Thomas flew out to Sandidge in left as Caleb Harpole tagged to go to third. But it was ruled that Harpole left too the bag too soon, resulting a doubleplay.

Boston Heil relieved for the Sox and issued a walk before ending the inning by striking out Edmonson.

Bryant’s rally began with a double by East. Seth Tucker drew a walk and a passed ball allowed East to go to third. With one out, Logan Allen’s grounder to short got East home. With Tucker at second, Brandon Hoover slapped a single to right to make it 3-2.

Heil hit a batter to start the sixth but worked around it. The Sox, however, were set down in order in the top of the seventh to end the game.

The Sox will play a league game tonight at 7:30 against Sheridan.

Reps aplenty for Hornets with 7-on-7, team camp at North Little Rock
Hornets earn 7-on-7 championship at Hendrix