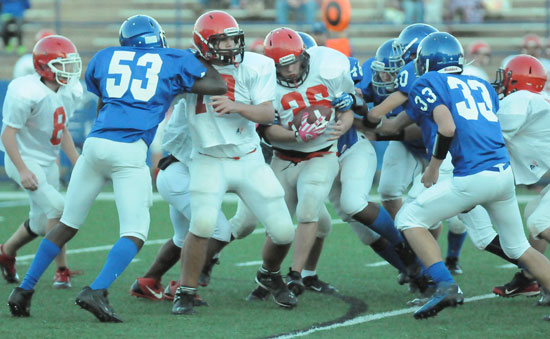 It was feast or famine for the Bryant White Hornets eighth grade team of Bryant Middle School Thursday evening as they closed out their 2013 schedule against the Cabot South Panthers at Bryant Stadium. The Hornets scored five touchdowns, three in the air and racked up 343 yards of offense but suffered five interceptions including one that was returned for a touchdown. 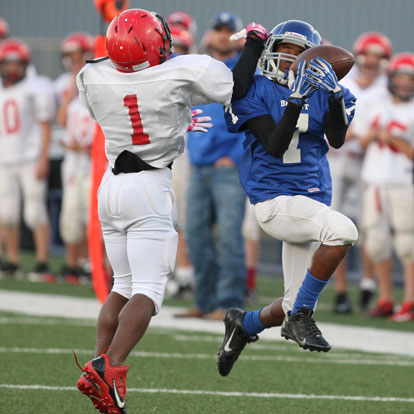 They fell behind 22-0, battled back to within 22-14 and trailed 40-20. In fact, the fifth interception came after Cabot South had secured that last 20-point margin with 3:41 left to play. Both teams had turned to reserves only to have Arther Joyner break a 55-yard touchdown run for the Hornets with :59 left. A two-point conversion pass from Brandon Hill to Konnor Clontz made it 40-28 and when Bryant recovered an onside kick with :50 left, back came the starters for both teams. With :36 showing, Tristan Calhoun completed a pass to Aaron Griffin who broke it for another 55-yard touchdown.

Suddenly, the Hornets were within a touchdown.

But, another onside kick followed and Cabot South’s Sebastian Stinnett claimed it as the Panthers held on for a 40-34 win. 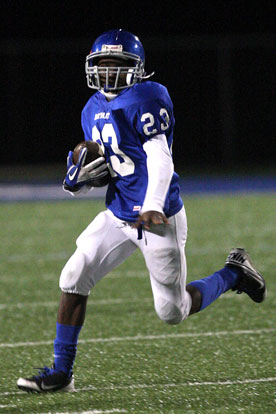 Arther Joyner on his way to a 55-yard touchdown run. (Photo by Rick Nation)

Calhoun, despite the interceptions, wound up completing 10 passes for a whopping 292 yards including five catches for 212 by Griffin with all three touchdowns.

As usual, the Cabot team pounded the ball on the ground and threw just four passes. But two of those were completed for touchdowns. Tight end Blayn Lucas caught both of those throws. He also ran for a touchdown. Marc Magwood had a pair of touchdown runs and three of the five interceptions.

The Panthers opened the game with a 52-yard march for a score. After grinding it to the 15 on seven plays, Lucas broke loose for the touchdown. Sebastian Stinnett powered in for the two-point conversion to make it 8-0.

Bryant’s first possession reached the Cabot 45 when, on a third down, Calhoun was sacked for a loss of 15. On the fourth-down play, Calhoun’s deep throw was intercepted by Magwood, which really worked like a punt.

But two plays into the resulting possession, with everyone biting on the run fake, Lucas got behind the Hornets’ secondary and hauled in a 41-yard touchdown toss. With another conversion run by Stinnett, it was 16-0 going into the second quarter.

The Hornets were again hampered on offense by a sack in which Calhoun was dropped at the Bryant 29. On fourth down, they went for it unsuccessfully so Cabot South had a short field to try to add to the lead.

But the Hornets’ defense stepped up. A fumbled pitch was recovered by Magwood but he was chased down by Isaiah Ash, Trace Tally and A.J. Todd and dropped for a 13-yard loss. A play later, the Panthers punted for the first time in the game. 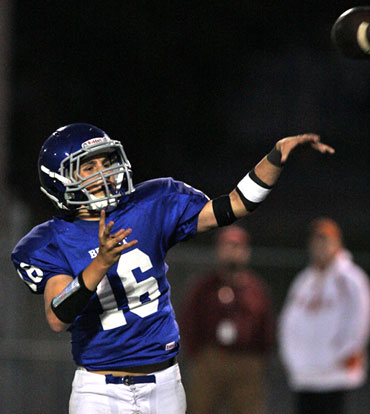 But they had it back in short order. The Hornets had a holding penalty pin them back at their own 10. On a third down, Magwood came up with his second pick. Again, it was as good as a punt as the Panthers gained possession at their own 35.

Eight plays later, however, Lucas got behind the defense again off a run fake and Ty Cyr found him for a score that made it 22-0.

Bryant, with just one first down to that point, got a huge lift when, on a third-and-10 from their own 30, Calhoun launched a throw down the right side on a fade route that Griffin ran down for a 70-yard touchdown. Calhoun ran in the conversion to make it 22-8 with :12 left in the half.

With a little more time, they may have scored again. Johnny Wallace recovered an onside kick and, on the last play of the half, Calhoun connected with Keshaun Davis who nearly broke free. But he was tackled at the 30 as the half ended.

But White got the ball to start the second half and promptly took advantage. Calhoun passed to James Polite for 7 yards and a first down then, a play later, found Griffin for 17. From the 44, the duo connected again with Griffin making a splendid juggling catch down the right sideline, somehow staying in bounds. He tight-roped the sideline into the end zone to make it 22-14.

In turn, Cabot South nearly scored on the kickoff as Skinner returned 50 yards before Joyner made the touchdown-saving tackle. But it really only delayed the score. Two plays into the possession, Magwood skirted the end and scored on a 21-yard gallop to make it 28-14. 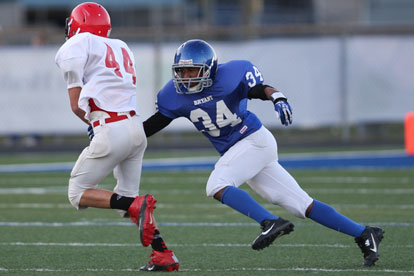 Moments later, Skinner picked off Calhoun’s pass in the left flat and sprinted down the sideline for another TD, making it 34-14 with 3:40 left in the third quarter.

Bryant’s hopes of a comeback appeared to be dashed when Cabot’s Daniel Clevenger intercepted a pass and returned to midfield but, a play later, the Hornets’ Nick Smith forced a fumble that Todd recovered.

Calhoun and Griffin connected for 26 yards then an 18-yard completion to Davis reached the 14. A penalty for a horse-collar tackle pushed the ball to the 7 setting up Calhoun’s 2-yard keeper for a touchdown on a fourth-and-goal. A try for two failed and, with :39 left in the period, The Hornets had cut the lead to 34-20.

Again the Panthers seemed to have clinched it with a classic 57-yard march on 10 running plays, capped by Magwood’s 20-yard run. That came a play after Cabot South converted a fourth-and-3 at the 25 with a 5-yard burst by Stinnett.

Magwood’s third pick came with 3:41 left, spoiling a drive that was fueled by a 36-yard completion from Calhoun to Davis.

With reserves on the field for both teams, the Panthers went three and out. A short punt gave the Hornets possession at their own 45 and three straight passes by Hill fell incomplete. On fourth down, Joyner swept the right side and dashed the distance, setting up the final Bryant push.

The Hornets finish the season 4-3 with two of their losses by less than a touchdown. 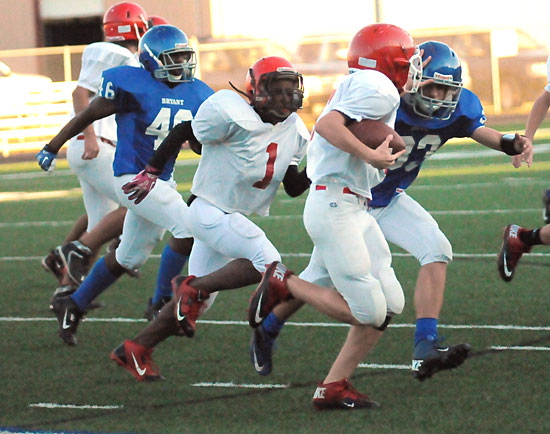 Brooks Ellis (33) closes in on a tackle as Johnny Wallace (46) gives chase. (Photo by Kevin Nagle)