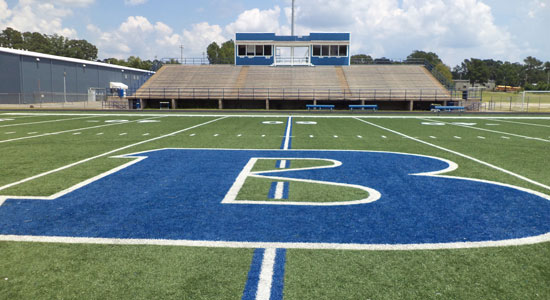 The homestretch of the 2013 season for the Bryant Hornets has become a step-ladder in which they face teams that are a little tougher each week. After Little Rock Fair and Sheridan, the Hornets host Texarkana for Homecoming tonight then travel to Lake Hamilton and finish at home against El Dorado.

Judging just by records, it would seem the biggest leap from one week to the next would be from Texarkana (2-5) this week to Lake Hamilton (5-2) next but, after reviewing video of the Razorbacks, Bryant coaches aren’t so sure.

“They’re one of the best 2-5 teams I’ve seen on video,” declared Hornets offensive coordinator Lance Parker. “They have two really, really good defensive players, an end (Kendrix McCann) and a linebacker (Jonathan Bailey). They could play for anybody. They look good.

“What we’ve got to do is stay on blocks and make sure we’re cutting the ball vertically and we don’t let those guys go to take big shots on us,” he mentioned. “We’ve got to figure out a way to handle those guys.

The Hornets will be trying to retain their share of the lead in the 7A/6A-South Conference. They’re one of five teams at 3-1 in the league. Texarkana is 1-3 but that one league victory was an impressive one two weeks ago at El Dorado.

“The last few weeks Texarkana has tried to establish themselves as a smash-mouth football team,” reported Bryant defensive coordinator Steve Griffith. “They played El Dorado and came out in two tight ends and just pounded the ball and did it very, very effectively. They went to El Dorado and won where people don’t win. That’s the second time El Dorado has lost at home in five years.

“They got some respect right there,” he noted. “Then they came out and played extremely well early against Benton (last week), really pounded the ball out of the two tight end set. They ended up giving up some big plays defensively and fell behind. They moved to a spread set and weren’t quite as effective out of that.

“They’ve got a big offensive line,” Griffith continued. “The quarterback (DeAndre Scott) presents some problems if he decides to run. He’s 5-9, 225. The big kids that plays linebacker and defensive end, also come over and play fullback, very physical fullbacks. Then they have two kids at tailback (Stacy Moss and Andrew Bishop) who run the ball well.

“You look at their record and you see they’re 2-5 but when you look at them on film they’re scary,” he concluded. “They’re very capable. We’ll have to play extremely well.”

Bryant beat Sheridan by the same score it had handled Fair, 49-0. The mercy rule went into effect at halftime and none of the Hornets’ starters played in the second half.

“We played well,” Griffith said of the defense. “We felt like, on paper, we were probably a better team that Sheridan but you have to go out and execute. We were pleased that, after a turnover early, we were able to go out and get a stop and keep them out of the end zone. Then we pretty much controlled the ballgame the rest of the way.

“We were happy to see some guys come off the bench and play extremely well,” he said. “They got some good experience that’ll hopefully help us over the next few weeks as we work towards the playoff.”

Bryant made 12 tackles for lost yardage on 40 Sheridan snaps on offense. The Yellowjackets managed just 67 yards of total offense.

“I thought we played pretty sound,” said Parker of the offense. “Everybody did their assignments pretty well. We didn’t have a lot of busted plays. I think they’re really understanding what we want. We’re playing really well as a team. There’s nobody out there doing their own thing. They’re all playing within the scheme and I think it shows with the execution. We’re doing a lot better than we did early.”

The Hornets accumulated 498 yards of offense. On 12 second-half carries, sophomore Savonte Turner led in rushing with 80 yards. Devonte Howard, working in the Wildcat, picked up 66 yards on six tries and Kylon Boyle rushed for 54 yards on just five tries.

Quarterback Brandan Warner was 8 of 11 for 138 yards and three touchdowns in the first half. In the second half, Madison Schrader hit all four of his throws for 40 yards. He also contributed a 40-yard touchdown run.