MOSES LAKE, Wash. — This time, the comeback came up short as the Bryant 14-year-old All-Stars’ bid at a second straight Babe Ruth World Series championship was brought to an end a game short of the title tilt Friday night. Westchester, Calif., scored four runs in the second inning and built a 7-0 lead through four frames. 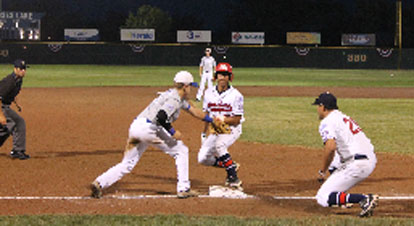 Bryant rallied for a run in the fifth and two in the sixth but could get no more. Westchester, the winner of the American Division pool, advances to play for the championship on Saturday against American runner-up Tualatin Hills, Ore., which ousted Clifton Park, N.Y., 7-3, earlier on Friday.

Most of the players were on the team that won the 13-year-old Babe Ruth World Series a year ago.

Misenheimer continued his hot hitting at the tournament, going 3 for 3 in Friday’s game. Allen also had a 3-for-3 night.

Shurtleff absorbed the loss on the mound, working five innings and surrendering seven runs on 11 hits, though only two of the runs were earned because of a pair of Bryant miscues. He walked one and struck out three before giving way to Fincher who gave up a run on one hit in the sixth.

Nolan Martinez went the distance for California. After shutting out Bryant on three hits over the first four innings, he wound up allowing 10 knocks. He walked two and fanned eight. At the plate, Martinez had three hits and drove in three runs.

Westchester took a 1-0 lead in the home first. An error allowed Justin Morris to reach but Shurtleff retired the next two batters. Martinez, however, doubled to plate the run. 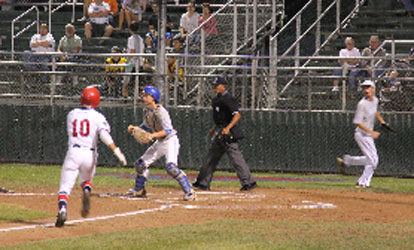 Misenheimer singled to start the second, providing Bryant’s first hit. But Martinez retired the next three, two on strikes.

A singled, a sacrifice and a double produced a run in the bottom of the second. Shurtleff got the next batter to foul out to Kelly but then the Californians lashed four consecutive hits, including a double to push the lead to 5-0.

Allen singled to open the Bryant third but Westchester turned a doubleplay and Martinez recorded another strikeout to send it to the bottom of the inning. Shurtleff worked around a two-out single with the help of Hurt, his catcher, who threw out the runner, Jonathan Phelps, trying to steal.

A one-out single by Shurtleff and a walk to Misenheimer gave Bryant its best chance to score in the top of the fourth but Martinez escaped unscathed as Hurt and Kelly each grounded into force plays.

Westchester put together a two-out uprising in the home fourth to push the lead to 7-0.

Bryant scratched out its first run in the top of the fifth when Allen singled, advanced on a passed ball, took third on Hastings’ bouncer to the right side and scored on an infield hit by East.

Orender was hit by a pitch to keep the inning going but Martinez got Shurtleff to fly to left, ending the threat.

The Bryant hurler worked a 1-2-3 inning and his teammates rallied again in the top of the sixth. Misenheimer singled to center and Hurt walked. Kelly sacrificed them to second and third then Brown came through with a sacrifice fly to make it 7-2. Allen’s base hit chased Hurt home then Hastings reached when his grounder to short was booted. But, once again, Martinez wriggled off the hook when he induced a grounder to third off East’s bat.

With Fincher on in relief, an error and a double produced an unearned run, zapping some of Bryant’s momentum. Martinez retired the first two batters of the seventh before Misenheimer yanked his third hit into left for a single. But the game ended when Hurt grounded into a force at second.