There’s still competition for playing time for the Bryant Hornets varsity football team so head coach Paul Calley used Friday night’s Fan Fair intersquad scrimmage to get film on everybody except those who had varsity roles locked down. 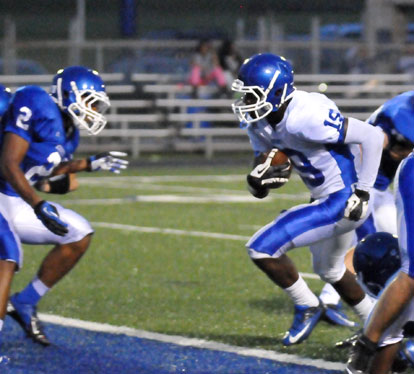 Kylon Boyle (19) breaks into the end zone ahead of the tackle of Steven Murdock. (Photo by Kevin Nagle)

Freshman head coach Kenny Horn got most of his players on the field as well in his team’s portion of the scrimmage.

Both coaches will get a better view of their squads early next week. The freshmen are set to host Pine Bluff for a scrimmage on Monday evening. On Tuesday, the high school team will host defending Class 7A champion Fayetteville and Class 5A powerhouse Pulaski Academy in a preseason scrimmage.

Calley went into the night looking for one thing, he said. 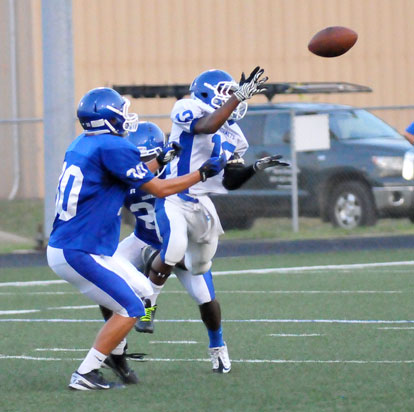 Sophomore Najee Hunt (12) goes up for a pass in front of Dillon Daniels (30). (Photo by Kevin Nagle)

“Effort,” he declared. “When we get to practice when it’s cool then we have come back in the evening — even when we had to practice late in the afternoon at 5 or 6 o’clock — it was a whole lot cooler than when we started school (last Monday). We came out the first day and kind of dragged. Second day, we got a little better. Third day, we got a little better then we dropped back off again.

“So the main thing I wanted to see was for them to come out here and push themselves,” he continued. “And they did that.

“They made some mistakes but they’re all fixable,” the coach said. “We’ll do a lot of correcting with the film. We played a few guys that are going to play varsity but those are guys that are still trying to earn a spot and I wanted to see them out here when they’re going snap after snap after snap. They get tired and are they still going to execute? Are they going to be physical? Are they going to go brain-dead?”

The sophomores scrimmaged first with the junior varsity, including some varsity players, following.

“We’ve got a lot of guys taking snaps at quarterback,” Calley noted. “That’s not by design. (Sophomore) Jaret Jacobs is injured, which forced a couple of receivers (Jordan Gentry and Kannon Porter) to step in and play quarterback with one group. Then Gunner Burks and Madison Schrader ran the second group. We’ll use probably Davonte (Howard) and Wesley (Akers) with the first group (on Tuesday along with starter Brandan Warner).”

“Overall, I was pleased,” the coach concluded. “I saw what I came to see. I wanted to see them get after people. 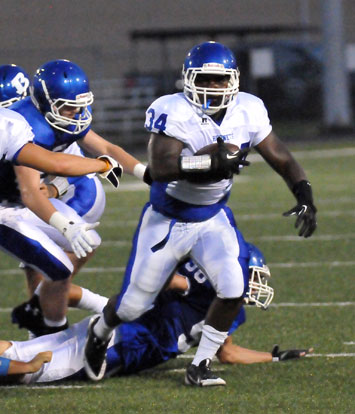 Jarron Wade tries to get to the corner. (Photo by Kevin Nagle)

“Nobody got hurt,” he noted. “That’s the best thing. It’s always the scariest thing for me is to lose somebody during a scrimmage.”

In assessing his team’s scrimmage, Horn said, “For the most part, I thought we did okay. I’m not real satisfied. It was kind of controlled tonight. We’ll find out more Monday.

“I think offensively, I liked our pace,” he related. “I think our tempo was good. That’s our goal, to have a quick tempo.” 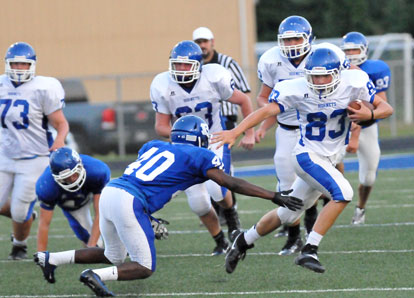 Of the defense, the coach commented, “We didn’t really get a whole lot of defensive reps. Our group-one guys, when they were on the field for their plays, looked pretty good. They flew around and everybody pretty much was good technique-wise and assignment-wise. So I feel pretty good about our defense.”

Horn held out a couple of players and will get six or seven more players returning to the team after this weekend when the Bryant 14-year-old baseball team returns from the Babe Ruth World Series.

“They’ve been gone for a week and they’re going to figure in pretty good,” he said. 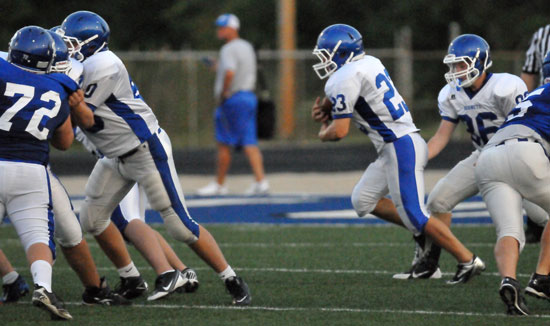 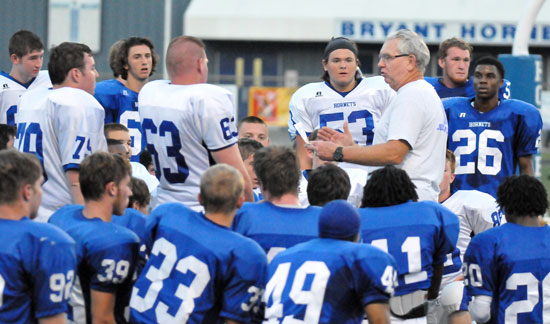