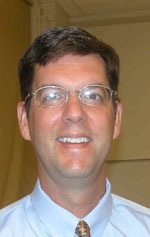 Jay Pickering, an assistant principal and athletic director at Little Rock Central High School, has been hired by the Bryant School District to serve as the new principal of Bryant High School.

Pickering, 38, was chosen from among around 10 applicants by a search committee, chaired by assistant superintendent Don McGohan.

“Mr. Pickering was very much a standout candidate for the position,” said McGohan who mentioned that three finalists were interviewed. “He has experience. He’s obviously familiar with the current operations of a high school. He’s very assured. He has an excellent personality for working with staff, with kids. He’s knowledgeable and confident.

“We had good interviews with the other candidates as well but Mr. Pickering was definitely at the head of the list,” he added. “I checked with the other panel members and everyone had him at the top of their list.

“You know, Central High School is a wonderful educational institution but Bryant has that community feel,” Pickering explained. “You go to a football game, the whole community is there. It’s just a first-class district. Test scores are phenomenal. The faculty is wonderful. It’s just absolutely an exciting time in my professional career. And I’m just absolutely elated to be coming into a district that just passed a millage, being able to be a part of a brand new school with the construction.

Pickering will take over for new superintendent Randy Rutherford, the current BHS principal, on July 1.

He said he was very familiar with the school.

“As athletic director at Central over the last five years, I’ve already established relationships,” he said. “I’ve known Mr. Rutherford since I was a junior in high school. He taught at Fair with my mother. He’s been a mentor and someone I’ve always looked up to for advice. I’ve established relationships with members of the coaching staff and administrative staff over the last five years.”

Along with the teachers on the search committee for the principal position, Pickering said he met others when he interviewed for an assistant principal job in the past. “It just wasn’t the right time for me to come down there,” he mentioned.

When asked about potential problems, Pickering said, “I don’t expect many problems whatsoever. Obviously, we’re going to have some issues with the traffic with the building of the new school. But you deal with problems on the secondary level because they are going to arise. Obviously, secondary students sometimes have issues. You try to be pro-active and you deal with those. You’re very firm with the handbook and I believe in discipline. But as far as major issues, I don’t see any. But, with a collaborative effort between the administrative staff and the teachers, we’ll overcome what obstacles may arise.”

Pickering graduated from Hendrix College with a degree in Political Science.

“I went to graduate school for a year and got my educational hours, became certified and started teaching at Little Rock Parkview in 1995-96. I spent seven wonderful years as a Social Studies teacher and a basketball coach. We were fortunate to win a couple of State championships there.

“I got into administration and spent three years at Southwest Middle School,” he continued. “And I’ve been at Central High School for five years now.

“I’m all but dissertation,” Pickering mentioned. “I’ve got all the graduate hours, all the classes have been taken. Now I just have to write that big paper.”

His wife, Kerri also a Hendrix graduate, is a physical therapist at Baptist Hospital in Little Rock.

“We have a beautiful seven-year-old son, Winston Andrew,” Pickering added. “We call him Andrew. I named him after my late father.

“My mother was actually a graduate of Little Rock Central and a lifelong educator around the country,” he added. “She retired when my son was born.”

Originally from Dallas, Pickering moved with his family to Little Rock when he was in the seventh grade where he attended Joe T. Robinson. In high school, he played basketball along with his older brother on the Senators’ 1987 State championship team.

When the desegregation rulings changed the districting in Little Rock and Pulaski County, Pickering started going to Parkview where he continued his basketball career for the legendary Charles Ripley. In his sophomore year in 1988, the Patriots too won a State title.

“I ended up being Hendrix College’s last scholarship athlete,” he recalled. “I played there for three years. Between my sophomore and junior years, they went Division III and I kept my basketball scholarship then gave up my senior year to play.”