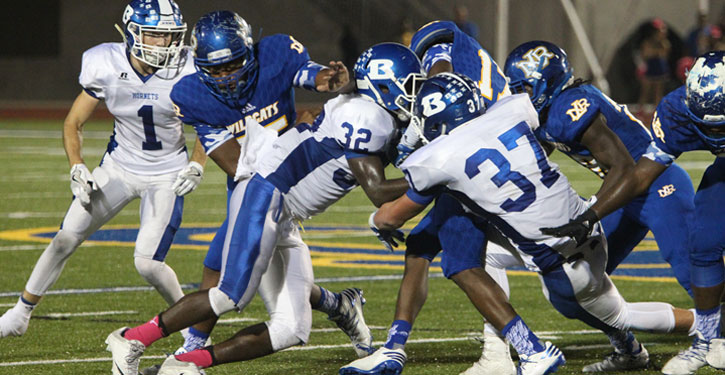 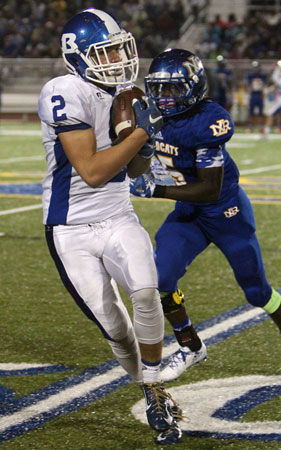 NORTH LITTLE ROCK — The Bryant Hornets, who clinched a bid to the 2016 Class 7A playoffs with a 48-20 win over Cabot last week, will try to clinch a first-round home game next Friday when they host the rival Conway Wampus Cats on Senior Night at Bryant Stadium.

The third and fourth seeds from the 7A-Central Conference will open the playoffs at home and the Hornets, with a win, would secure a No. 3 seed. The top two teams in the league earn a first-round bye then host a second-round game.

The Fort Smith Northside Grizzlies clinched the No. 2 spot on Friday night with a 35-21 win at Cabot. And the North Little Rock Charging Wildcats remained unbeaten on the season and will certainly remain the top-ranked team in the state as they clinched the top seed for State with a 38-7 win that just happened to be against the Bryant Hornets.

The Wildcats came into the night with an average winning margin of just over 34 points a game. They didn’t hurt that average in week nine. They were impressive as they built a 31-0 lead by halftime. With a touchdown drive to open the second half, the Charging Wildcats made it 38-0.

The sportsman ship rule or ‘mercy rule’ kicked in at that point. It’s the first time since Oct. 28, 2011 that a Bryant team was the victim of the mercy rule. That night, the Hornets lost at North Little Rock 35-0. The year before, a playoff trip to Bentonville resulted in a mercy-rule loss 38-7. 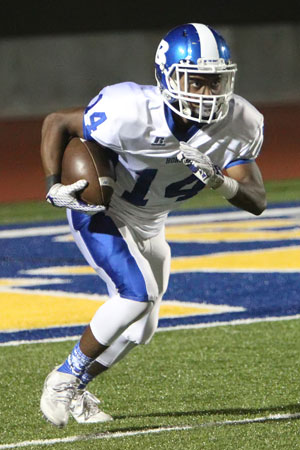 The Hornets put together a nice 8-play, 87-yard scoring drive in response to North Little Rock’s second-half TD. They would get the ball only twice more in the second half as the clock rolled continuously in accordance with the sportsmanship rule.

Going into the game, Bryant head coach Buck James noted that the talent-rich Charging Wildcats were ranked No. 1 in the state for a reason and they showed it against the Hornets.

Bryant came in with a plan to make North Little Rock beat them through the air. And the Wildcats, who average nearly 300 yards a game on the ground, were held to just 194 by the Bryant defense though, admittedly, in an abbreviated contest. And all five North Little Rock touchdowns came on running plays.

And the Charging Wildcats’ quarterback Trey Cox answered the challenge Bryant’s strategy put forth by completing 12 of 20 passes for 233 yards.

The Hornets’ defense forced eight third-down situations but North Little Rock converted five of them, all on pass completions by Cox.

While acknowledging that his team has come a long way in a short time putting together a four-game win streak, James has continued to say that the improvement needs to continue for them to be as good as they want to be. The loss to North Little Rock, obviously, illustrated that. Yet, there may not be anybody that can beat the Charging Wildcats this year. 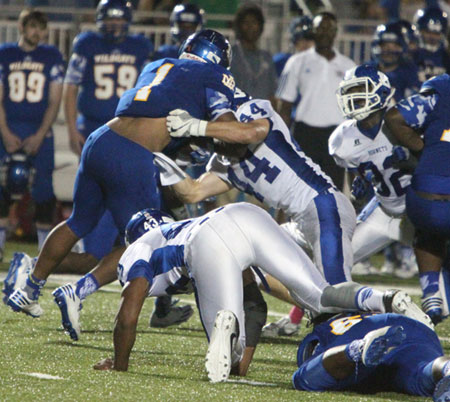 Nathan Mayes (44) smacks North Little Rock fullback Darius Austin (1) as Avery Everett (43) scrambles to get in on the tackle along with Antonio Todd (32). (Photo by Rick Nation)

They scored on six of their first seven possessions.

The Hornets had their moments but they struggled to maintain the success.

They got off to a halting start with false-start penalties on the first two snaps. But quarterback Ren Hefley came back to complete a 28-yard pass to Seth Tucker that got the Hornets out of a hole.

A play later, however, Hefley was sacked. It was the first of three sacks for the Charging Wildcats.

Bryant had to punt and a short kick gave North Little Rock possession at its own 40. On the first play, Wynton Ruth broke a 60-yard touchdown run. But a holding penalty negated most of the run.

The Hornets forced a fourth-down play at the North Little Rock 49 and, frustratingly, a hard count produced an offsides penalty and a first down. 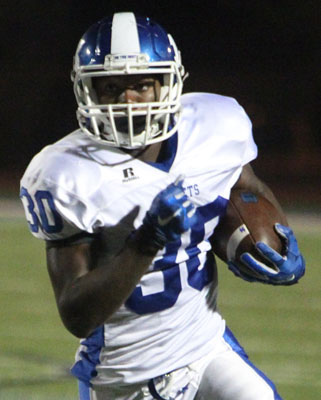 Tight end Zurich Bolden got wide open down the middle on the next play and Cox found him. Bolden would’ve scored but the pass forced him to fade a bit to his left and he was unable to keep his balance.

Still, the Charging Wildcats were in the red zone and eventually scored on fullback Darius Austin’s 4-yard burst. Savana Melton drilled the first of her five extra points in the game. She also knocked through a 39-yard field goal when North Little Rock’s next drive stalled.

In Bryant’s second possession, Helfey was sacked back to the 13. He completed a 17-yard pass to Landon Smith on third down but it wasn’t enough to make up the ground that had been lost.

After Melton made it 10-0, Hefley and Smith combined on a 24-yard completion but, three plays later, Hayden Ray was back on to punt again.

North Little Rock pounded out a 77-yard touchdown drive that frustrated the Hornets’ defense more as they forced third-down situations three times and, on each, Cox hit a pass for enough yardage to keep the drive alive.

The teams traded punts, resulting in a possession for Bryant that began at its own 14. Three plays later, it was fourth-and-15 at the 9. Ray dropped back into his own end zone to punt but, this time, shanked the ball off the side of his foot. The result was 7-yard punt.

Hefley threw to Luke Curtis for 12 yards then found Smith for 13 as the Hornets drove into North Little Rock territory but the Charging Wildcats turned them back and Ray punted them back to the 11 with 3:08 left in the half.

Cox converted a third down with a 9-yard pass to Joseph Hoard. Two plays later, on another third down, that duo combined on a 69-yard play, which set up a 6-yard touchdown run by Ruth with 1:07 to go in the half, making it 31-0.

To start the second half, the Wildcats needed just four plays to drive 69 yards for their last score. Austin’s 17-yard run reached the end zone.

Bryant’s answering drive was highlighted by a 40-yard pass from Hefley to Tucker. Jeremiah Long ran for 5 yards to the North Little Rock 22 then DeAmonte Terry scooped up a 20-yard pass from Hefley. Long then scored from the 2. Ray added the extra point and the final score was on the board with 6:35 left in the third quarter. 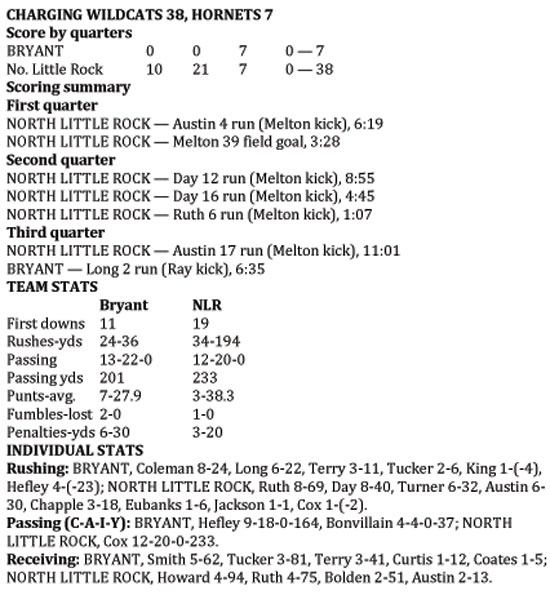