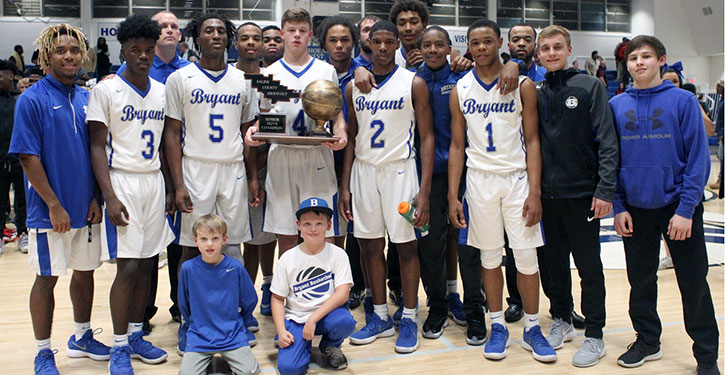 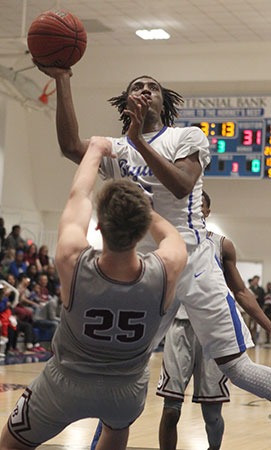 Rodney Lambert drives to the basket as Benton’s Connor Croft (25) tries to take a charge. (Photo by Rick Nation)

It hadn’t been a game that Sam Chumley would relish as one of his best. He hadn’t scored, didn’t have a rebound and he’d been relegated to the bench for considerable time.

But, in the last minute of the annual Saline County Shootout, the Bryant senior made one big play after another.

With the Hornets leading 39-38, he pulled down the carom off a missed by Benton Panthers senior Jai Peters. When he was besieged by the Panthers, Bryant head coach Mike Abrahamson called a timeout with :31.8 showing.

When play resumed, however, the Hornets turned it over on the inbounds play and Benton’s Evan Sims was fouled with :30.3 showing. Shooting the front end of a one-and-one, Sims, who finished with 15 points for the Panthers, knocked it off the back iron. The carom came out long and he got to it, driving right back at the basket only to have Chumley there waiting on him, absorbing a charge that gave the Hornets a chance to extend their one-point margin.

With :22.7 left, however, Bryant’s Rodney Lambert was unable to get his free throw to go. Peters out-paced Lambert for the long rebound and was fouled in the tangle.

With :22.1 to go, Peters, who finished with 16 points in the game, went to the line with a chance to tie it or give the Panthers the lead. But he missed. The Hornets rebounded but turned it back over.

Carson Cates tried a 3 for Benton but it came out to Peters only to have Khalen Robinson steal it away for Bryant with time running out. Robinson got it to Camren Hunter who dashed to the other end and missed a flying layup. But hustling back to follow up the play was Chumley, who tipped in what proved to be the clincher, making the Hornets a 41-38 winner in a barn-burner at a packed Hornets’ Nest.

“Sam — I’m so proud of him because he’s heard for years to do these things,” said Hornets coach Mike Abrahamson, who’s led the team to three consecutive Shootout victories now. “He’s heard for years, follow the ball, follow the play, don’t give up on the play. For him to follow that in and tip it in, plus to take that charge and he got a big rebound in crucial moments, was just huge; for our senior to come up like that.” 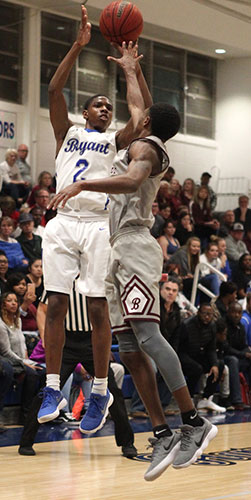 It was Chumley’s only basket of the night. The other Bryant senior starter Deron Canada led the Hornets with 15 points. Robinson, a sophomore, had 14 and freshman Camren Hunter 5.

Benton roared to a 12-2 lead out of the gate, getting behind Bryant’s trapping defense for layups, most often by Sims. Peters proved difficult for the Hornets to corral.

“We’ve got to give them a lot of credit because they had a plan — we had a plan — but they executed really well, right from the jump,” Abrahamson said of the Panthers. “They were ready for what we were throwing at them. I think our guys, even though we tried to prepare them for it, I don’t think they thought Benton was going to be that much in attack mode. And I think we had to adjust to the speed of Peters. That guy’s a heck of a player.

“And I thought we were kind of rushing some shots, settling for shots — you get caught up in the environment a little bit,” he added.

It was 16-4 early in the second quarter before Lambert made a whirling move into the lane for a three-point play.

Peters countered with back-to-back buckets to make it 20-7 then Canada and Sims traded baskets.

But that’s when the Hornets kind of settled in. Robinson made a steal and hit two free throws, got fouled again moments later and added two more. With 2:25 left, Lambert drove and kicked to Canada for a 3 and it was 22-16.

An offensive-rebound bucket by Maleek McClendon ended Benton’s drought but a 3 by Canada made it 24-19 at the half.

“At the quarter, we settled down, adjusted to the speed and the fact that they were attacking on offense,” Abrahamson commented. “And when we were on offense, we started getting better looks, just being a little bit more patient. I thought cutting it in half in that second quarter was huge. Then to chip away, chip away, chip away.” 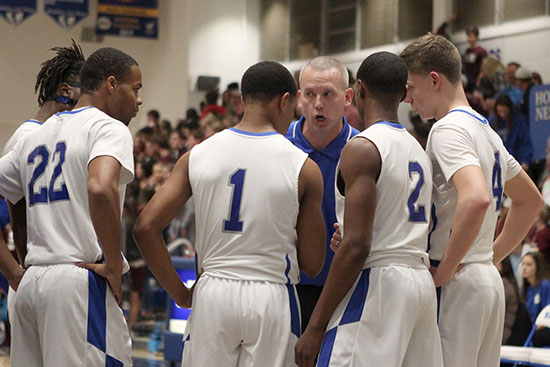 Head coach Mike Abrahamson talks to his players during a timeout. (Photo by Rick Nation)

Sims hit a free throw to start the third quarter but then Robinson and Canada splashed consecutive triples to even the game at 25. And it was nip-and-tuck the rest of the way.

Benton led 31-27 on a jumper by Peters but Canada scored off an inbounds play and, a minute later, Hunter buried a trey to put Bryant up 32-31. Peters countered with a drive to rack but Robinson’s 3 at the buzzer had the Hornets ahead 35-33 going into the final eight minutes.

Peters tied it early in the fourth but Hunter hit two free throws. Cates drained a 3 with 3:26 left to give Benton the one-point advantage and when Robinson couldn’t get a couple of shots to go, Benton became even more deliberate offensively.

But, with under three minutes to go, the Panthers turned it over on an illegal screen. In turn, the Hornets were charged with an offensive foul. With 2:00 left, Benton coach Dexter Hendrix, a one-time student assistant for Abrahamson, called timeout.

The Panthers set up another 3-point look for Cates but his shot from the top of the key rimmed out. Peters rebounded but the Hornets tied him up and gained control on the alternating possession. 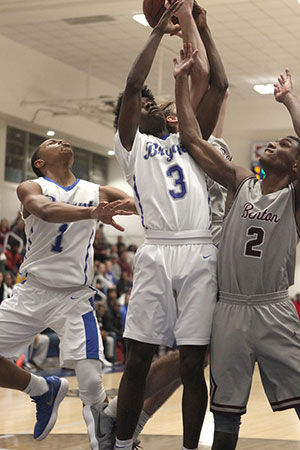 K.J. Merriweather (3) and Camren Hunter (1) work in traffic under the basket. (Photo by Rick Nation)

Robinson put together a determined drive down the left side of the key for a basket that had the Hornets ahead 39-38 with 1:02 go play.

“Gosh, there were some winning plays down the stretch,” Abrahamson said. “Khalen’s drive to the basket, some big rebounds, Sam’s charge, Sam’s tip-in. But then there were some really bad plays. We couldn’t get it inbounds, we fouled, missed a front end of a one-and-one, stepped out of bounds, gave up an offensive rebound when they missed the front end of a one-and-one. So, it was just kind of chaotic.

“I thought the difference in the two teams — they’ve got a few more seniors that are really hungry out there,” he concluded. “We’ve got some talent and a team that I like but we’re a little bit younger and we maybe don’t quite understand the effort that’s required night in and night out to be successful. I can only hope they’re learning and can adjust. I’m proud of them for just hanging in there tonight and making one or two plays at the end that (Benton) couldn’t catch up to.”

The Hornets return to action in the Bank of the Ozarks/John Stanton Classic in Conway Friday at 4 p.m., when they’ll take on Fayetteville. On Saturday at 12:30 p.m., they’ll wrap up the pre-Christmas schedule against Van Buren.