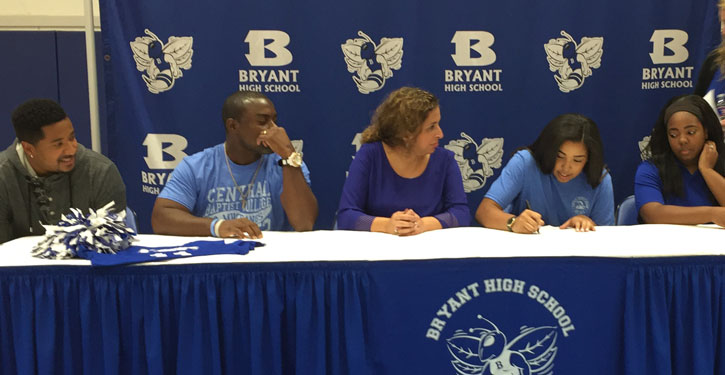 Though she was only able to contribute on the floor one year for the Bryant Lady Hornets volleyball team, just a brief conversation with Sarah Clemmons makes it clear what an impactful player she was for the team. Her exuberance and positive attitude shines through as a natural leader.

Add that to her skills on the floor as a middle hitter and there’s every reason to the believe that she’ll be successful at the next level.

On Thursday, Cummings, the daughter of Larry and Anna Clemmons, made that official when she signed to continue her volleyball career and her education at Central Baptist College in Conway.

“The first time we actually got to see her play with the girls,” recalled Bryant head coach Beth Solomon, “I remember her tryout and we were like, ‘Holy cow!’

“She’ll go from one side of the court to the other in a blink of an eye, just refusing to let that ball hit the ground, just the hustle, the effort, the athleticism that’s there,” she continued. “That’s good for CBC, that they’re getting that. We’ll have to find someone to step up and take that role for next year.”

Clemmons moved into Bryant after her sophomore year at Little Rock Central.

“I tore my ACL twice and I couldn’t play my sophomore or my junior year,” she related. “I knew if I wanted to be on a team that could possibly help me, with people that can actually play, I came to Bryant. And I wanted a good education. I feel like everything got better at Bryant. It wasn’t difficult. I had friends here before I came over here.”

“We, unfortunately, only got her for one year,” Solomon said. “Just having her that one year was impactful. She can hit the ball. It would’ve been great to have her for several other years too.

“When you come in to a new coach and you’ve got to learn that system, that takes a year,” the coach added. “Despite the fact that it was her first year, she played a huge leadership role on the court and off. She was one of our powerful middles.”

She had no idea she led the team in aces.

“I don’t know when that kicked in,” she laughed. “I think that just came with my time of playing. I didn’t know I was leading in those stats, at all. That’s pretty awesome really.”

Said Solomon, “We’re definitely going to miss her, not just on the court but off the court as well with her leadership and the way she peps the girls up. They kind of looked to her as a role model. She was a vital asset to us this year. I’ll always remember Sarah for her bright, bubbly personality and her big smile.”

“I try to be a leader,” Clemmons acknowledged. “When you’re a senior, you kind of have to be a leader. And I just try to do my part on the court. Be the hitter on the team that I’m supposed to be.”

She said that she’d been playing volleyball since she was 6 years old.

“My mom put a ball in my hand when I was 5,” she related. “I’ve always played volleyball. I love it so much.

“I didn’t start thinking about playing in college until my eighth grade year in middle school,” she said. “I literally wrote down the schools — I thought I was going to be at the University of Texas but, in reality, that didn’t happen. I’m not 6-2.

“From eighth grade, I just tried to work every day on that,” she continued. “I went to personal, private camps, one-on-one training. I talked to my mom and my dad. They did a lot for me. If it wasn’t for them, this wouldn’t have happened.”

She admits that CBC was not the first school she thought about going to.

“I really didn’t hear about CBC until my mom pulled them up,” Clemmons said. “I was looking out of state at schools in Texas and Tennessee.

“I went to a tryout and I thought I was never going to go there but I really prayed about it,” she continued. “I just asked God to help me figure out what school to go to. I went on a visit by myself and I really liked it. I enjoyed it. I felt like that was the school I needed to be at.”

The coach of the Mustangs women is Shatel Gaines, a native of Jonesboro who graduated from Arkansas State and came to CBC last year after coaching at Cape Girardeau, Mo., high school.

“She said she really needed someone else to come in as an asset,” Clemmons said. “She knew I was going to help with the team and get them points and help them achieve the goal. She said she thought that I was one of those people that could help them do that. That showed me how much she would help me and take care of me.”

Clemmons said she wants to major in Kinesiology and go to Chiropractor school, hoping to have her own clinic one day.

In the meantime, she said, “I’m starting AAU volleyball, JO (Junior Olympic) volleyball. In the summer, I play beach sand volleyball. That helps me get in shape and get my vertical up. It’s fun. I like it.”