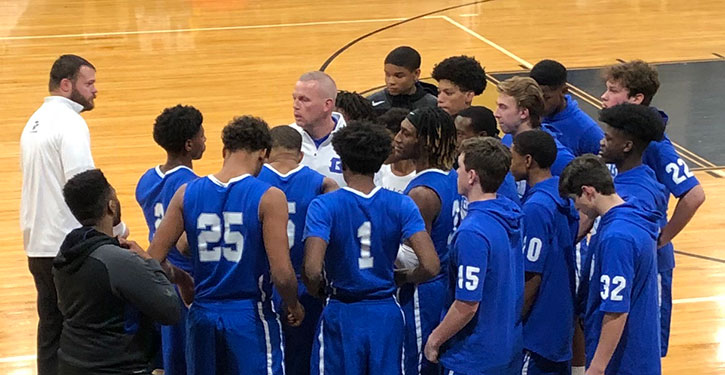 Clutch plays in the end help Hornets hold on at Central

LITTLE ROCK — With four minutes left to play, Little Rock Central Tigers’ senior Da’Jun Brewer rebounded a teammate’s miss and scored to bring his team even with the Class 6A’s top-ranked team. But the Bryant Hornets held the inspired Tigers to 2 points the rest of the game and forged a 49-45 victory at a packed Boone/Fitzpatrick Fieldhouse on Friday night.

That ranking and the fact that the Hornets are atop the 6A-Central Conference standings tend to bring out the best in every opponent and, on basketball homecoming at Central, it was an intense physical battle that, somehow, the Hornets pulled out.

It was their ninth consecutive win, all in conference, and 15thin their last 16 games.

Khalen Robinson, who finished with 19 points, 10 rebounds and four assists, hit a 3 with 3:03 left in the game to snap the tie. After a Tigers’ miss, Hornets’ head coach Mike Abrahamson called on his players to spread the floor on offense, in part to get the Tigers out of their zone defense — mostly a 1-3-1 but also a 3-2 along the way. It also created driving lanes for the Hornets that Robinson took advantage of right away. His layup made it 48-43 at the 2:25 mark.

Central’s K.D. Arnett missed twice inside on one end and Bryant’s Camren Hunter missed twice in traffic on the other. The Tigers’ Rajhon McIntosh scored to make it a one-possession game at 48-45.

Central called a timeout with 1:14 remaining and, when play resumed, forced a Bryant turnover. The Tigers, however, returned the favor. The Hornets worked the clock as Central fouled to get to the bonus.

Finally, with 52 seconds left, they sent the Hornets to the line. Rodney Lambert, however, couldn’t get the front end to fall and, again, the Tigers had a chance to tie it with a 3.

As they worked for a shot, the ball came loose, and Hunter dove on it, keeping it away from the Tigers that were diving on the floor, trying to force a held ball. But Hunter got a timeout called with :13.9 left.

When play resumed, the Hornets were inbounding the ball on the side in the backcourt. Central’s 6’7” Ubong Etim was on the ball and, after being told to step back to give Lambert room to inbound it, Etim was hit with a technical foul for getting too close.

Robinson went to the line for the Hornets with a chance to make it a two-possession game again. He missed the first shot, however. His second did the trick, though.

The Hornets also got possession of the ball. So they inbounded it to Robinson in the backcourt. Central brought a trap and Robinson backed up, lost his footing and went to the ground as the ball rolled out of bounds.

Abrahamson had tried to call a timeout as soon as he saw his junior guard surrounded. At first, a timeout was signaled, and Central coach Brian Ross protested to the point when a technical was called on him as he contended that Robinson didn’t have possession when time was called.

“I called a timeout,” Abrahamson recounted after the game. “The official that was close to my bench blew his whistle. Khalen still had possession of the ball. He was still dribbling the ball, but the whistle wasn’t loud. Nobody heard it.

“They keep playing for seemingly several seconds,” he continued. “I’m saying, ‘Blow it again! Blow it again!” When he blows it again and it’s loud — well, now nobody knows when he blew it the first time.”

After the meeting of the officials, it was decided that the timeout hadn’t come in time, that the ball belonged to Central on its baseline and the technical foul was rescinded.

The other official stepped in and made the call on the whistle that he heard,” Abrahamson explained. “So, it’s one of those things that happens. It’s a fluke thing. It’s not ideal. You want them to get it right, but it happens.”

That fact that the Hornets had a 4-point lead at the moment made it a little easier to take.

The Bryant defense forced the Tigers to inbound the ball deep. Arnett missed a contested 3 and the ball came out long again off the hands of a Bryant player. The Tigers’ A.J. Williams tried to track it down in the backcourt but slipped. Robinson beat him to the loose ball and time ran out as he drove to the other end.

“I’m glad our guys stuck with it and just defended,” Abrahamson said. “A lot of crazy things happened in this game. It was Homecoming here, so the crowd was, you know, just extra. Just a lot of things going on. Our guys really kept their composure and stayed focused. That’s what I’m proud of. You can’t always control what happens, but you can control how you respond to it. I thought maybe we saw some growth in that area tonight, when we didn’t really play our best.

“Our kids really stepped up late,” he added. “Khalen hits a big 3. We get some big rebounds. We get some big stops on defense. We took care of the basketball, except for maybe one turnover there. We had to inbound the ball a lot against their pressure. I’m really proud of those things.

“I don’t like it when people say, ‘when it counts’ because it all counts but, at the end, when it’s time to make what we call ‘winning plays’ — Cam’s dive on the floor, that loose ball, and getting a timeout. That’s huge, just huge. That’s maybe the play of the game.”

Treylon Payne had 12 points for the Hornets, Hunter 8 and A.J. Jenkins 5.

Williams led Central with 14. Brewer had 12.

The Hornets led most of the first half. They were down 4-1 when Payne canned a 3 to tie. Hunter scored off a feed from Robinson then Payne hit a driving jumper to make it 8-4.

Arnett, frustrated that no foul was called on his attempt inside, was hit with a technical with 1:15 left in the quarter but Robinson missed both free throws and the Hornets turned the ball over.

The Tigers were unable to take advantage and, holding for the last shot, Bryant made it 10-4 when Robinson beat the buzzer with a layup.

Etim scored 5 quick points to start the second period. Hunter countered with a pair of free throws and, after Brewer scored, Payne drained another triple off a kickout from Catrell Wallace.

Brewer scored again inside but Robinson buried a 3 to give the Hornets an 18-13 lead.

After a Central timeout, however, the Tigers surged, taking the lead with an 11-0 run.

But the Hornets cut it by scoring 5 points in less than three seconds. Robinson nailed a 3 with :02 to go then the Tigers turned the ball over trying to inbound it quickly. Bryant gained possession under its own basket with :01.5 showing. And, on the inbounds pass, Lambert was fouled.

With no time on the clock, he converted twice at the line to make it 24-23.

The Hornets regained the upper hand with the first 8 points of the third quarter. Jenkins converted two free throws then Robinson fed Wallace for a basket. Hunter converted a turnaround jumper on the left baseline and, off a Central turnover, knocked down a running jumper.

The Tigers whittled the margin from 31-24 to 37-34 before, once again, Robinson beat the buzzer with a 3 and Bryant led by 6 going into the final eight minutes.

Arnett made a steal and a dunk to start the fourth and, when the Hornets missed, the Tigers had a chance to get closer. But Lambert made a steal that led to a 3 by Payne and it was a 7-point lead.

Williams led a Central rally. His basket with just under five minutes left had the Tigers within 43-41. Payne missed a 3 and Brewer tied it, setting up the late-game drama.

“We didn’t play well,” Abrahamson stated. “We didn’t rebound well throughout the game. We had trouble scoring. Central played really well. They gave us what we probably believe was their best shot. Somehow, we withstood it.”

The win improved the Hornets to 18-4 overall and 9-1 in the league going into Tuesday’s home game against Fort Smith Southside.