Conference opener usually a key to season for Hornets, Rockets 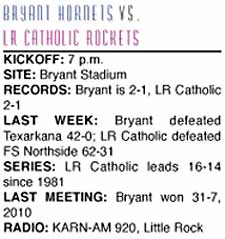 Of course, every conference game is important and every team wants to get the league season started on a positive note but, for the Bryant Hornets, recent history indicates that winning their traditional 7A/6A-Central Conference opener against the Catholic Rockets is vital.

Over the last six seasons, the four times the Hornets defeated the Rockets they stayed in contention for a conference championship right down to the wire.

In 2006 when Bryant beat Catholic, 26-10, they were unbeaten in conference until the last week of the season, losing only then to Little Rock Central in a game for the[more] championship.

In 2009, Bryant prevailed 21-13 and finished a game behind co-champions North Little Rock and Cabot but had a shot at a share of the title going into the ninth-week loss to the Charging Wildcats.

And last year, the Hornets’ 31-7 win over the Rockets put them on the road to a share of the league crown.

By contrast, the Hornets lost to the Rocket in 2008, 27-21, and had to fight to finish tied for fourth. And, in 2005, when Catholic handed them a 24-7 setback, they wound up 4-3 in conference play, finishing in a three-way tie for third. They had to beat North Little Rock in the final week of the season to qualify for the playoffs.

On the other hand, the years the Rockets won they were in contention until the end, finishing tied for second in ’08 and winning the conference with an unblemished mark in ’05.

You get the picture. It’s crucial for both teams.

Both teams went 2-1 in non-conference play and, as has been noted elsewhere, Bryant lost 45-40 to Fort Smith Northside and, a week later, Catholic beat Northside 62-31. The same thing happened last year (by different scores) but the Hornets proved you really can’t compare scores by whipping the Rockets.

“I expect a hard-nosed, close football game that could potentially go either way,” stated Catholic’s second-year head coach (and longtime assistant) David Estes. “(The Hornets) have a lot of speed on both sides of the ball at every position so that’s always tough. We’ll have to sustain blocks and we have to tackle well. It should be a good football game.”

“Catholic is a very good football team,” commented Hornets defensive coordinator Steve Griffith. “Offensively, they’ve put some big numbers up in two of their three ballgames. They’re going to be a very big challenge. They’ve got an outstanding quarterback. He’s a threat not only to throw the football but to run the football. If he’s throwing the ball and you flush him out too quickly, he takes off running. He hurt us with his legs last year I remember in the first series at War Memorial.”

That quarterback is senior Zach Conque, the son of Clint Conque, the head coach at the University of Central Arkansas.

The Rockets also have a returning starter at running back in Quinta Thomas and at wide receiver in Weston Holloway and Allen Mays. But the only returning offensive lineman is Jacob Wickliffe.

Catholic has beaten Springdale as well as Northside, while losing to conference rival North Little Rock in a non-conference game two weeks ago.

“I’m very pleased except how we finished against North Little Rock,” said Estes. “We had the ball inside the red zone five times — actually inside their 5 yard line five times and came away with one score. Other than that, I’ve been pleased on both sides of the ball and I like where we are right now. We certainly have things to improve and want to get better.”

Bryant’s returning players are quarterback Hayden Lessenberry and receivers Dillon Winfrey and Sawyer Nichols on offense. Running backs Karon Dismuke and Jalen Bell played a lot last year too and have performed well this season. The offensive line is revamped but improving.

Defensively, Winfrey and Aaron Bell at the corners and Tim Kelly at end are probably the most experienced for the Hornets. Despite a shutout of overmatched Texarkana last week, Griffith and the Bryant defensive coaches are still shuffling players to try to find the spots where they can be most effective.

Those are all things that the Hornets, meanwhile, are continuing to work to improve. It figures they’ll need to take a step forward in many of those areas this week. Catholic is probably the best team they’ve faced so far this season. The Rockets are better defensively than Northside and, though perhaps not as flashy, just about as good on offense.

The key for the Rockets may be how well they can contain Bryant’s speed and play-making ability on offense. In fact, the game probably will come down to which defense does the best job of slowing down the offense and/or create turnovers.