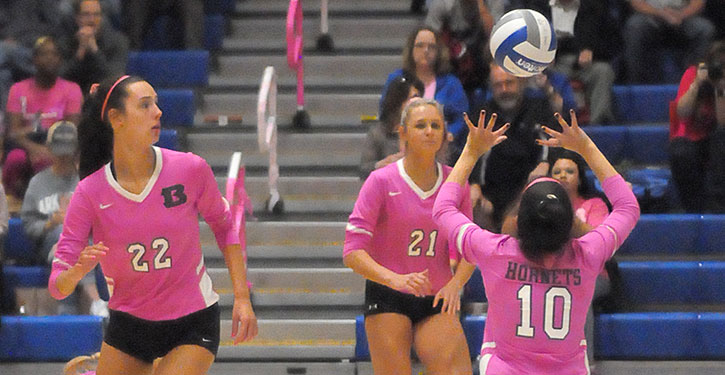 The Conway Lady Cats locked down a number two seed and a first-round bye at the 6A State Tournament with a sweep of the Bryant Lady Hornets at the Hornets’ Nest on Tuesday night.

Unfortunately for the Lady Hornets, they did not qualify for State. They will close out the 2019 season on Thursday when they’ll celebrate Senior Night with a match at home against Benton.

The Lady Hornets were good on 87 percent of their serves but recorded just one ace, by Sam Still.

Kills by Reynolds and Bates, along with a block by Bates allowed the Lady Hornets to stay close in the first set. It was 5-5 before Conway built a lead. When it got to 11-5, Bryant head coach Leigh Ann Back called timeout.

Conway added a kill when play resumed before the Lady Hornets got a side-out thanks to a hitting error. But a kill by the Lady Cats turned the tables and the lead ballooned to 16-6.

Another block by Bates and kills from McCallister and Hoskins had the Lady Hornets within 14-22 but that’s as close as they could get.

In the second set, it was, again, tied 5-5 when Conway started to build a lead. A kill by Bates and Still’s ace brought the Lady Hornets even. But it was 5-9 before a hitting error produced a side-out. Bryant, however, was unable to maintain control and before the Lady Hornets could score again, it was 6-17.

The lead was 10 before Hoskins got a kill to close the gap but Conway finished up, increasing the advantage further.

That run continued into the third set. Conway pushed out to a 9-1 lead. Kills from McCallister and Hoskins helped rally the Lady Hornets to 4-10 but it was never that close again as the Lady Cats finished off the sweep.

‘Pink Out’ honors those who have, are battling cancer
Bryant Blue halftime