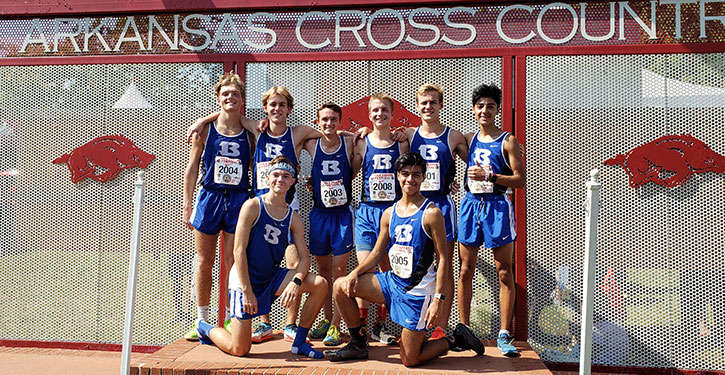 FAYETTEVILLE — In the annual Chile Pepper Cross Country Festival at Agri Park on the campus of the University of Arkansas, there were 11 different divisions filled with runners. Among those were two high school boys divisions and a junior boys divisions. The Bryant Hornets competed in the “El Caliente” 5K and finished 55th out of 103 teams that included 771 athletes. Bryant placed ninth among Arkansas teams.

“This meet just keeps getting bigger and I think it’s probably too big,” said Hornets coach Steve Oury. “With 771 athletes and 103 teams in the “El Caliente” division (each team’s top 8 runners), there are just too many kids for the course to handle. Hopefully more divisions will be created in the future.

“We could only get one athlete on the starting line, which means that everyone else was stuck in traffic from the start,” he noted. “I believe there is some value in learning to handle running in crowds, but when it gets this big there is just nowhere to run if you are not in the top 50 or so.

“Bresner Austin didn’t get out as fast as we would have liked, but he did a good job of fighting the traffic and passed over 30 runners after the one-mile mark,” added the coach. “Our usual second runner (Hagan Austin) caught a cramp and was not in our top five. Chris Herrera stepped up and ran a solid race.

“Looking at the results, I noticed lots of good runners who struggled. We will learn from this experience and get ready for the Danny Westbrook Invitational next Saturday at Bishop Park.”

The Bryant Junior High boys team, in a 2K race, finished fifth overall in a field of 48 teams plus addition runners competing as less than a full team, 778 athletes in all.